You are at:Home»News»Ethnic Conflict Erupts in Peaceful Corner of Afghanistan 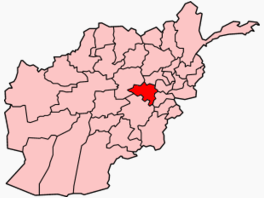 Local sources have confirmed to me that clashes have broken out in the Behsud district of the Maidan-Wardak province of Afghanistan over grazing rights as Kuchi nomads begin their annual migration. Clashes between alleged armed Kuchis and Afghan police – who tried to prevent the Kuchis from entering Hazara villages – have left one policeman injured and two dead, reports Afghanistan’s TOLO News.
In the past, these localized ethnic conflicts have had serious national — and even international — implications. Although no civilians are reported to have been harmed this year, locals are already evacuating their villages as the clashes are expected to escalate, Afghan journalist Mohsin Jamal tells me.
The clashes mark the beginning of what has become a yearly pattern of deadly conflict as Kuchis (a primarily nomadic people who are part of the dominant Pashtun ethnic group) make their annual migration through areas traditionally inhabited by the Hazara ethnic group.
But this year was supposed to be different because, after years of relying on the central government, local stakeholders themselves attempted to resolve mutual differences. I have obtained a document showing a peace agreement signed between local Kuchi and Hazara leaders, apparently brokered about two weeks ago by Maidan-Wardak Governor Mohammad Haleem Fidayee. Despite this fresh peace agreement, Afghan security forces have for the first time mounted serious resistance against the annual incursion, fearing that the Taliban are trying to infiltrate safer areas of the province by exploiting the differences between the Kuchis and local villagers.
The Kuchis claim that they have grazing rights in areas where Hazara villages happen to be situated. Although these differences existed under the Taliban and, indeed, for generations before them, clashes have made headlines in recent years as Hazara villagers have attempted to prevent the Kuchis from using what they consider their agricultural and pastoral lands.
In recent years, thousands of villagers have been displaced, dozens of villages burnt and an unknown number of people have been killed and injured on both sides of the conflict as the Afghan government’s attempts have repeatedly failed to remedy the situation.
Steeped in historic sentiments and bearing considerable economic repercussions for both sides, the conflict can have real national reverberations. Last year, when clashes were at their most intense, the Hazaras protested in Kabul, Mazar, Bamiyan and other areas of Afghanistan and in several countries abroad – including in Norway, Sweden, Australia and the UK – against the civilian deaths and the government’s inability to broker a solution. Intense debates occurred among lawmakers. Second Vice President Karim Khalili stepped down in protest, vowing never to return until the issues are resolved for good.
Mr. Khalili has long since returned to his office but the issues still loom – this time even worrying the Afghan government that the Taliban might exploit them to make inroads into peaceful areas of the country.
National political figures on both sides of the issue have been accused of stoking this sensitive issue for political gains. As long feared, even the Taliban are now piggybacking on the issue.
The most effective way to neutralize the Taliban’s influence in the conflict is to resolve it effectively so it is no longer open to exploitation. This would entail answering to the satisfaction of both parties the legal and constitutional questions of land rights, clearly delineating grazing and agricultural lands, impartially implementing these solutions, and establishing peaceful conflict resolution mechanisms in case differences emerge in the future.