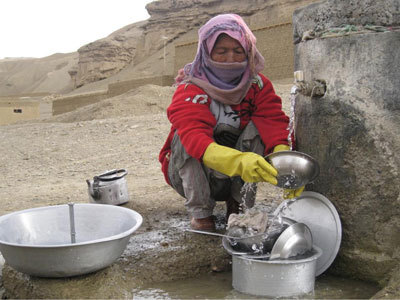 MRG’s Media Officer, Emma Eastwood, spoke to Fakhria Ibrahimi, a Hazara woman who has high hopes for her embattled country.

Seldom does a day go by without the latest atrocities of the war in Afghanistan being splashed across the pages of the world’s media. Yet, we rarely hear the voices of ordinary Afghans who continue to go about their daily lives despite the conflict.
“I live in Kabul and am a member of the Hazara community, most of whom live in central Afghanistan. Our customs and culture are not so different from the Pashtun majority, but we are mainly Shia Muslims and speak Farsi. We also have some special words from the Mongolian and Turkish languages.”

“The discrimination faced by Hazara people in Afghanistan is mostly political, not social. We do not have as much political representation as we would like and this means that in Hazarajat the government does not have much of a presence. The infrastructure is not as good as in other provinces, there is not much development and few good roads.”

“I work for an organisation called Canadian Women for Women in Afghanistan which supports women in my country through education, capacity building, health care, handicrafts and libraries. My work involves collecting reports, documents and photographs of our local Afghan partners.”

“Many women access our services – word spreads fast through the neighbourhood networks and through social activities.” “My work has shown me how open Hazara people are. When I knocked on the doors of Hazara families in small villages in the countryside and told them I was a photographer for an international organisation and would like to take photographs to send to Europe and America in order to show how life is in Afghanistan and build support, they accepted straight away. There has been a change, this would not have happened 10 years ago – Hazara people were very repressed when the Taliban were in power.”

“I am 32 years old. I completed my schooling in Kabul, but when the Taliban captured the city I went to Pakistan and continued my education at university in Peshawar. I studied medicine for two years but because of personal issues I couldn’t continue.”

“When I came back to Kabul after the fall of Taliban I took some classes on women and politics, and, as I was interested in photography I took courses on photography and filmmaking for women.”

“My family have always supported what I do. My husband in particular helps me a lot on my trips to rural areas. I wouldn’t be able to travel alone, so he comes with me.”

“When I’m taking pictures of Afghan women, the fact that I can put their lives, problems and daily activities into images gives me great pleasure.”

“Fortunately I do not have many challenges in my work – my colleagues are all very helpful and the conflict does not affect my work too much.”

“What are my hopes and dreams? That there is positive change for all Afghans. If my neighbour is not comfortable I cannot be happy. Only when my Pashtun and Tajik neighbours are secure and contented then I too will be. I wish for every Afghan to have a positive outlook on life, and this can come through education.”

“Although I work with women I can’t claim that I am a feminist. I believe in human rights. In Afghanistan women face so many challenges in their lives so that’s why I focus on helping them. Why do we need separate rights – women are human, men are human, we are all human and I am a believer in human rights. I am working for equality.”

Shia Family Law or Shiite Personal Status Law is a law that was approved in February 2009 with Afghan President Hamid Karzai’s signature. The new law will only affect the Shia denomination of Afghanistan, approximately six million people. The initial version of the law included articles that imposed drastic restrictions on Shia women, including a requirement to ask permission to leave the house except on urgent business, and a requirement that a wife have sex with her husband at least once every four days. As a result of international and national pressure, which included Afghan women taking to the streets to protest, braving threats and violence, Karzai submitted the law to a consultation process with civil society groups in May, which resulted in some improvements. However, the legislation still contains some of its most repressive measures.

Fakhria, who photographed the women’s street protests, says that the majority of Shia Muslims in Afghanistan are Hazara, so this was a law targeted specifically at Hazara people.

“We are not naturally fundamentalist. Hazara women and girls are very active, many are educated and have jobs and are involved in social activities. I think that the law wanted to remove the Hazara women from these activities.” 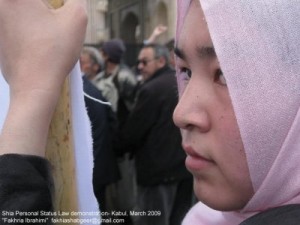 “There were two kinds of women at this protest in Kabul: one group of Hazara women were protesting against the law and others were counter-demonstrators, students of a Shia leader from the local madrassah. The Hazara women were together with social organisations who were working for human rights, whilst the counter demonstrators coming from the madrassah were accompanied by men who were throwing stones.”

“The Hazara women were so calm, despite being confronted by this aggression. At one point I found myself amongst the madrassah students because it was so crowded! It was almost funny.”

“Then suddenly the Hazara women all disappeared – they were just a small group because a large contingent was blocked some streets away. The counter demonstrators then went to a Hazara school and attacked and killed one person.”

According to Save the Children up to 92% of girls in many rural areas of Afghanistan don’t attend school. As Fakhria shows me her photo albums she tells me the story of a Hazara woman living in a village in Bamiyan who is doing her utmost to buck this trend.

The woman is the village leader, its nurse and midwife (we look at photos of her wearing a mask delivering a baby in a well organised clinic), its teacher of women and girls, who is also presiding over the building of a school for girls. She has personally ensured that every street in the village has a tap from which to collect fresh drinking water, in a region where women habitually collect water from a communal tank for drinking and cooking that is also used for washing clothes and families. For her efforts our heroine is constantly threatened by local mullahs.

With tales like this of ordinary yet extraordinary women, it’s easy to see why Fakhria has so much hope for her long-suffering country.