You are at:Home»Refugees»Pakistan and the rest of Asia Pacific»Malaysia’s Detention Centres Are No Orderly ‘Queue’ 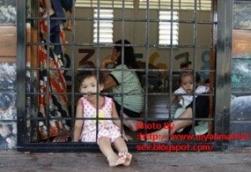 Children at the Lenggeng Immigration Detention Depot south of Kuala Lumpur.
Pakistan and the rest of Asia Pacific

By Admin on May 13, 2011 0 Comments
Children at the Lenggeng Immigration Detention Depot south of Kuala Lumpur.
Share this story

When Michelle Dimasi tried to visit an Afghan asylum seeker in detention in Malaysia, she was told that ‘for his own safety’ he was not allowed visitors. She hasn’t heard from him since

After producing two films that criticised the Taliban, Amin had little choice but to flee Afghanistan in 2010. His brothers, Rahmat and Ali, were already in Australia and had been found to be refugees.

Rahmat suffered two years on Nauru only to find himself returned to Afghanistan. Out of desperation, Rahmat made the journey to Australia a second time in 2009 and Australia finally granted him protection. In July last year, Rahmat informed me that Amin and nine other Hazaras had been caught by the police in Selangor, Malaysia. They were transferred back and forth between a prison and a detention centre several times and finally were detained in an immigration “depot” on the outskirts of Kuala Lumpur. Somehow, the men had bribed the guards to keep a mobile phone in detention. I called an extremely anxious Amin and learnt that he and the other men had been assaulted and no longer had any documents. They were in a bad way.

At the time, I was planning a trip to Kabul to research the plight of Hazaras in light of the Australian Government’s suspension of Afghan asylum claims. When Rahmat found out I would be transiting through Malaysia, he pleaded with me to help Amin.

On a sweltering hot tropical day, I drove for nearly two hours from Kuala Lumpur city and arrived at one of Malaysia’s 17 detention centres. The air was not only thick with humidity but with suspicion. Although they were dubious, the guards allowed me through the first checkpoint, but then the negotiation began.

The detention centre officer leafed through a thick book filled with handwritten names and fingerprints. Finally, he announced that Amin was in the centre, but that “you can’t see him, he is a victim of trafficking and it’s for his own safety he does not see you”.

The officer acknowledged that Amin was an asylum seeker but that the same draconian measures that are assigned for undocumented migrants or visa over-stayers were prescribed for Amin. Disappointed, I called Rahmat back in Melbourne and told him there was nothing I could do.

Two months later I was informed that Amin and 20 other Hazaras had escaped the detention centre. Amin never made it to Christmas Island and I have never heard from him again. I have grave concerns about what happened to them. He may have been recaptured and imprisoned in either Malaysia or Indonesia. He could have drowned on his way to Christmas Island. I have spent the last year trying to find him.

On Saturday, Julia Gillard announced that 800 asylum seekers will be returned to Malaysia if they attempt to seek asylum in Australia by boat. While the news that Australia will in turn take 4000 asylum seekers from Malaysia is welcome, the Labor Government’s plan to return people who are in desperate need of Australia’s protection is appalling. Malaysia is not a signatory to the Refugee Convention and has a record of human rights abuse.

According to UNHCR, Malaysia currently hosts over 90,000 asylum seekers and refugees. Malaysia’s Immigration Act does not have provisions for refugees and asylum seekers, which means that they are subject to the same punitive treatment as undocumented migrants such as detention, floggings and imprisonment. While asylum seekers can apply for UNHCR status in Malaysia and be exempt from detention, this does not always happen and I have heard many stories of authorities, guards, and RELA (a volunteer organisation with the power to use force and firearms on suspected undocumented migrants) confiscating UNHCR documents and asking for bribes.

From 2002 to 2008, 1300 people died in Malaysia’s detention centres or “depots” due to poor detention conditions and lack of adequate medical attention. Reports reveal that detainees only receive one cup of water a day and no vegetables, making malnutrition common. Detainees are often held in overcrowded environments with 300-400 people in a 30 square metre room, which often lack ventilation. There have been reports of sexual, physical and verbal abuse of detainees by the guards in detention centres.

Asylum seekers are left in detention indefinitely which has led to rioting in detention centres. This was demonstrated last month at Lenggeng Immigration Detention Depot in Negeri Sembilan when riots took place, the centre was burnt down and detainees escaped. Malaysia’s Deputy Police Chief Datuk Abdul Manan Mohd. Hassan said that investigations had revealed this event occurred because of the poor detention conditions and that “some of the escapees had lost patience in waiting to be resettled to a third country by UNHCR”.

Malaysian human rights groups claim that the incident came about because of the ongoing physical abuse of detainees by detention guards.

In an interview on ABC radio this morning, Immigration Minister Chris Bowen admitted that conditions inside Malaysia’s detention centres were sub-standard: “If people think that the situation for asylum-seekers in Malaysia is difficult, they should endorse the fact that Australia is taking 4000 out (over) the next four years,” he told Fran Kelly.

This new policy is being sold by the Minister and others as a regional co-operation measure to combat people smuggling and “share the burden” of asylum seekers. In fact it is a cynical and desperate political maneuver that merely reinforces the popular myth that there is an orderly “queue” that asylum seekers need to join in order to be accepted into Australia.

As the author of ‘Following Them Home: The fate of the returned asylum seekers’, David Corlett, notes: a more appropriate metaphor for the “refugee queue” is a “refugee heap”, whereby a few fortunate asylum seekers are plucked out to be resettled in Australia. Under this new policy, Australia will not return asylum seekers to any orderly “queue”. Instead those people who are owed Australia’s protection will be left to languish in Malaysia’s “refugee heap” with 90,000 other asylum seekers and refugees.