You are at:Home»Refugees»Pakistan and the rest of Asia Pacific»Attack on Hazaras 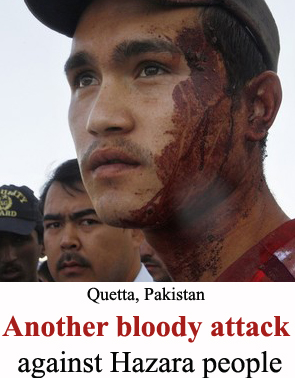 Attack on Hazaras
Pakistan and the rest of Asia Pacific A terrorist attack on members of the Hazara community in the ground and adjacent cemetery in Hazara Town of Quetta left eight dead and 15 wounded. People were taking an early morning stroll, playing sports in the ground or praying at the graves of dead relatives in the adjoining cemetery when the attack took place. Preliminary police investigation reveals it was a sectarian attack. The audacity with which this attack has been carried out boggles the mind. In a highly coordinated assault, after firing rockets from the nearby mountains, about a dozen terrorists appeared on the site in vehicles, lobbed hand grenades and started indiscriminate firing. This continued for about 20 minutes before they fled, leaving behind a trail of blood and gore. The death toll could have been much higher had this happened in an enclosed compound instead of an open ground. According to media reports, banned sectarian outfit Lashkar-e-Jhangvi has claimed responsibility for this incident. In reaction, the Pakhtunkhwa Milli Awami Party and Hazara Democratic Party observed a shutter-down strike in Quetta.
Extremist Wahabi outfits such as Lashkar-e-Jhangvi and Sipah-e-Sahaba consider Shias wajib-ul-qatl (worthy of murder). The Hazaras are a Shia community straddling Pakistan and Afghanistan. This is not the first time that they have been targeted due to their religious orientation. There is so much fanatical hatred amongst these extremist groups that it really does not matter to them if they are killing unarmed innocent people, including women and children, as long as the targeted persons fit their description of being ‘infidels’. It is alarming that, despite being banned, these outfits are operating with impunity in the length and breadth of Pakistan. Strangely, in a highly sensitive area such as Quetta, which is in the grip of an insurgency, no prior intelligence was available to law enforcement agencies about this attack. Frontier Corp and intelligence agencies have gained notoriety for their highhandedness in dealing with Balcoh activists, whom they illegally detain, torture and murder. How is it possible that they did not know of the presence of sectarian outfits and their activities in the area? Where was the police when this was happening? It is time the law enforcement agencies revamped their priorities and focused on protecting the citizens by rooting out militant sectarian networks and remaining vigilant about any such presence in their area. Otherwise, violence will not stop here.

QUETTA: A complete shutter-down strike was observed in the provincial capital on Saturday, condemning Friday’s attack in Hazara Town, which killed innocent people belonging to the Shia sect.
At least eight people were killed and eight others were injured in rocket attacks, followed by intense firing in Hazara Town on Friday morning. The strike call was given by the Hazara Democratic Party (HDP) and was backed by all the political parties and trader unions. All the shopping and trading centres situated at Jinnah Road, Double Road, Liaquat Bazaar, Abdul Sattar Road, Prince Road, Alamdar Road, Taugi Road, Shara-e-Iqbal, Sirki Road, Brewery Road, McConaghy Road and adjoining areas remained closed for the day.
Life stood paralysed in these areas due to the strike and the streets wore a deserted look with very thin traffic. However, some restaurants and medical stores resumed their business at sunset.
A large number of policemen and other law enforcement agencies were deployed in parts of Quetta to maintain law and order.
The HDP in its statement, issued on Saturday, termed the strike successful and thanked the people, traders and political parties for supporting the Shia community. HDP spokesman said that the government had so far failed to curb the incidents of targeted killings of the Shia community. “It was the first incident in this year and we, the community, had informed the authorities about the suspected attack beforehand. Even then, no measures were taken to provide adequate security in Hazara Town,” he added.
Source and copyright