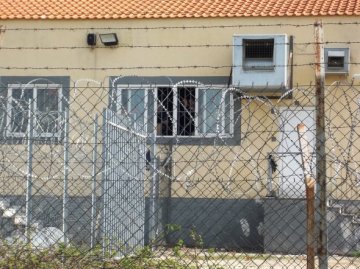 Filakio detention centre in northeast Greece, which have nicknamed “Greece’s Guantánamo” has unbearable contitions and asylum seekers allege they abused in the camp by Greek police. Ninety per cent of illegal immigrants in the EU arrive through the Greek-Turkish border – and into the appalling conditions of its detention camps, Irish Times correspondent Jamie Smyth reports on Saturday.

Situation in Filakio detention centre in northeast Greece, which have nicknamed “Greece’s Guantánamo” is unbearable and almost all asylum seekers in the camp report that they abused in the camp by Greek police.

Irish Times reporter describes the one cell as “dingy and overcrowded, very little light comes through a small barred window. Even at a distance of 10m the stench of urine and sweat is overpowering. Scores of men are squeezed together, either sitting on the floor or standing, with barely room to move. One man sits with his head in his hands.”

According to the report, several immigrants allege that they were maltreated at the centre. “One policeman beat me when I spoke English to him,” says Asif, a 24-year-old Afghan who worked for coalition forces in his home country and was forced, he says, to flee by the Taliban. “I was held for one night there, but I was sick when I got out . . . They treat you like an animal,” according to the Irish Times.

Europe’s top human-rights watchdog last month took the unusual step of issuing a statement about the centre. The Council of Europe said that Filakio provided “filthy, overcrowded, unhygienic, cage-like conditions, with no daily access to outdoor activity” for men, women and children. This could amount to “inhuman and degrading treatment”. Council inspectors also reported they had to step over immigrants to enter overcrowded cells at another Greek detention centre.

The Greek government, already struggling with the austerity terms of an EU-IMF bailout, says it can’t cope with the daily arrival of between 200 and 300 immigrants. It estimates that there are now 1.2 million immigrants in the country. Most are held in detention in camps for anything up to six months. The majority cannot be deported to their countries of origin – typically Afghanistan, Iraq, Iran, Algeria and Somalia – and are simply released without access to social welfare, food or housing. Thousands move to Athens, where many are destitute, according to the report.

A backlog of 55,000 undecided asylum cases means it is difficult for immigrants to submit asylum requests. The United Nations High Commission for Refugees (UNHCR) recently warned that the situation in Greece is a humanitarian crisis and that people needing international protection are not getting the chance to apply for it.

Even if asylum seekers get the chance to apply for protection, Greece accepts just 3 per cent of asylum applications. This is the second-lowest rate in the EU, ahead only of Ireland’s 2 per cent rate and below the EU average acceptance rate of 25 per cent.

Most immigrants who manage to enter Greece don’t want to stay there, and attempt to travel on to other EU states, such as Germany, France, Britain or one of the Scandinavian countries.

The Greek government plans to build a wall along a 12.5km stretch of Greece’s land border with Turkey, to try to stem the flow of immigrants. The proposed wall has been criticised by human-rights groups, which fear it will force immigrants and asylum seekers to take more dangerous routes across the river.

About 200 EU border guards from Frontex are conducting joint patrols with the Greek police in the asparagus and cotton fields on this part of the border with Turkey. The Greek police and Frontex have no power to return immigrants once they have crossed the border.

Irish Times reporter points out the fact tahr hundreds of immigrants have died in their desperate attempts to reach Europe. Some drown. Some freeze to death in winter. Others are blown apart when trying to cross the minefields that are a consequence of past conflict between Greece and Turkey. The number of immigrant deaths is so large that several Muslim graveyards in nearby towns have refused to bury any more bodies.

Sheikh Mehmet Damadoglu, who preaches in the Greek town of Didymoteicho, near the Turkish border, keeps a record of all the deaths. “The number of refugees grew with the Iraq crisis and the war in Afghanistan,” he says. “Since 99 per cent of the refugees are Muslims, I give them a Muslim burial. It is important to wash their bodies and wrap them in special cloth.”

Damadoglu recently opened a graveyard for illegal immigrants and asylum seekers on the outskirts of Sidiro, a small village in the mountains. The graveyard, which is the size of a football pitch, is bleak. Row upon row of earth mounds signify the graves of about 150 people. No grass is growing here, and the graves are unmarked. Bulldozer tracks criss-cross the site, which has plenty of space for more bodies. “We buried 12 people in January. Just one person came to claim a body. A Kenyan man came to claim his wife’s body. She was a Christian, but we advised him to leave her here because the body was in bad condition,” says Damadoglu, reports Irish Times.