You are at:Home»Human Rights»The contours of target killings in Balochistan 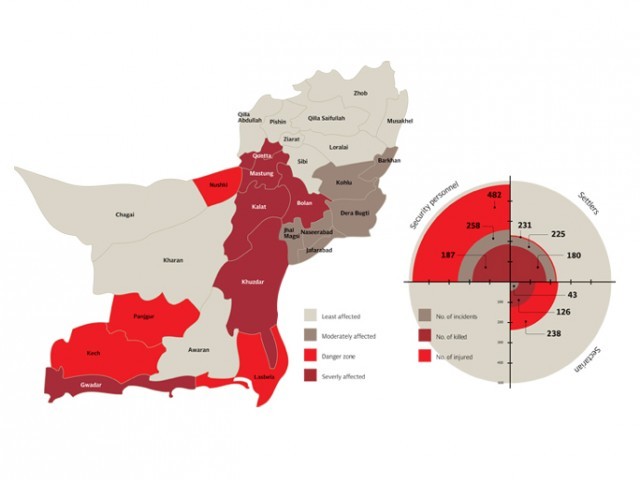 The contours of target killings in Balochistan

By Admin on April 24, 2011 0 Comments
A lack of resources and public sympathy for rebel groups hinder police investigations.DESIGN: SAMAD SIDDIQUI
Share this story

Sectarian killings have been mostly targeted against Hazara Shias, who came to Balochistan decades ago from Afghanistan and Iran. Police and counter-terrorism officials say that anti-Shia militant groups such as Sipah-i-Sahaba Pakistan (SSP) and Lashkar-e-Jhangvi (LeJ) are active in Balochistan. KARACHI: Despite the presence of paramilitary forces with their extended powers for years in Balochistan, target killings continue to increase in the restive province.

Experts say the trend in Balochistan is an interesting study to gauge how effective paramilitary forces can be in controlling crime and the general law and order situation in places like Karachi, where there is debate over whether more power and resources should be given to the Pakistan Rangers as police fails to do the job.

According to Balochistan police records, there were 256 incidents of targeting in Balochistan in 2009 that killed 200 people and injured 387. In 2010, 231 incidents were reported that killed 255 and injured 498. In the first three months of 2011, at least 39 incidents have occurred, which killed 38 and injured 66. Balochistan Constabulary Commandant Ghulam Shabbir Shah, speaking in Karachi recently, said that target killings are set to break all previous records in the province.

According to Shah, no target killings are reported in the province’s Pashtun-dominated areas, including Musakhel, Zhob, Loralai, Ziarat, Pishin, Harnai and Sibi.

The claim was confirmed by Pakhtunkhwa Awami Milli Party’s senior leader Abdul Rahim Khan Mandokhel but, he said, Pakhtun Baloch have been targeted in two or three cases. “Some unsuccessful attempts have been made to create a wedge between the Pakhtuns and Baloch,” he said.

Most target killing and terrorism incidents are reported in the districts of Quetta, Mastung, Bolan, Noshki, Kalat, Khuzdar, Kech, Gwadar, Lasbela and Panjgur. Four types of target killings are reported in Balochistan: Attacks on people who have settled in the province, assassinations of policemen and Frontier Corps (FC) personnel, sectarian killings and murders of political workers.

Settlers in Balochistan are numbered at least 461,328 and mostly comprise Punjabis, Seraikis and Urdu-speaking people. According to police statistics, based on inquiry and FIRs, at least 180 settlers have been shot dead between 2009 and March 2011.

Officials admit that investigations into most target killings of settlers remain unsolved.

“There is a joke in the province that if you want authorities to stop pursuing a murder case, have it claimed by one of the many rebel groups operating in Balochistan,” says National Party Vice-President Hasil Bizenjo.

One such case is that of University of Balochistan’s Professor Nazima Talib whose first death anniversary approaches on April 27.

“These cases are difficult to crack because Baloch people sympathise with rebel groups and, despite knowing who the murderers are, choose to remain quiet,” says Shah.

Shah says that despite clear evidence that police have suffered more, there is a severe lack of resources. “It is very easy to blame civilian institutions for failing to curb crime. But the truth is we don’t have the resources to even fight petty dacoits who have more sophisticated arms and equipment,” he said. On the other hand, FC and army units even get food rations for troops.

Sectarian killings have been mostly targeted against Hazara Shias, who came to Balochistan decades ago from Afghanistan and Iran. Police and counter-terrorism officials say that anti-Shia militant groups such as Sipah-i-Sahaba Pakistan (SSP) and Lashkar-e-Jhangvi (LeJ) are active in Balochistan.

But Jamiat Ulema-i-Islam-Fazl’s (JUI-F) Secretary-General Maulana Abdul Ghafoor Haideri, who hails from Kalat, says he doesn’t know if the SSP or LeJ are involved. “Experience shows that the state and intelligence agencies are the ones behind groups that instigate sectarian violence and ethnic strife,” he said.

Political party workers allege that they are being targeted not only by the state but by rebels as well.

Bizenjo, whose party has lost three senior leaders, says the heavily-armed rebels are against nationalists because “they say that you talk about federation when we are here up in the mountains waging a battle against the state.”

Balochistan National Party-Mengal’s (BNP-M) Dr Jehanzaib Jamaldini says the party lost one of their best leaders Habib Jalib last year in a target killing. “All evidence points to state elements being behind the murder,” he said.

Hundreds of Baloch men, including political workers, have gone missing in the province.

Bizenjo believes Balochistan’s security situation is interconnected with Fata and Afghanistan and violence is bound to continue unless things improve there. “Until it is decided that nowhere in the country will anyone be allowed to hold a gun, the state will not be able to establish its writ and target killings will continue,” he said.

Haideri says the government should either accept failure and step down or admit that it is involved in target killings in the province.