You are at:Home»Refugees»Australia»Flames, blast at Villawood Detention Centre as detainees protest 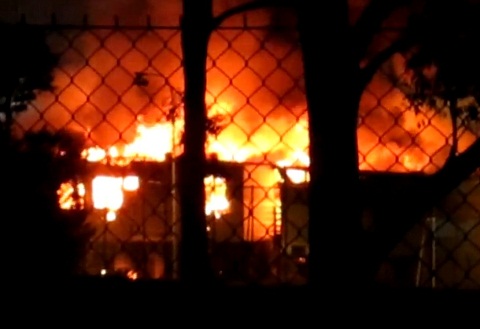 UPDATE 2.05pm: PROTESTERS remain on the roof of a Sydney immigration centre as the government said it would take a tough line on their claims.

Buildings were set alight and rescue workers attacked overnight in violent protests by asylum-seekers at the Villawood immigration detention centre.

Protests began yesterday, after two men climbed onto the roof. By midnight up to 100 people were involved.

Nine buildings, including a medical centre, kitchen, dining room, laundry and a computer room were gutted.

During the wild night of rioting roof tiles and furniture were also thrown at firefighters.

Authorities struggled to gain control of the volatile situation, and negotiators are still working to talk down two protesters who remain on the roof.

The government says most of the protesters appear to have reacted to having their asylum claims rejected.

Speaking from Japan today, Prime Minister Julia Gillard warned rioters at Villawood detention centre that their claims could be affected.

“Violence doesn’t get anyone, anywhere,” she said.

Speaking from tokyo before heading to a meeting with Japanese Prime Minister Naoto Kan, the PM said she had been briefed on the situation but would not comment on domestic affairs while abroad.

But she sent a message to those involved in the violent protest.

“Violence is wrong and it won’t help your claims,” she said.

Today, Immigration Minister Chris Bowen said it would extend an existing investigation into similar violent protests at the Christmas Island centre in March.

During that incident a group of 200 asylum-seekers threw rocks and burnt tents to the ground at Christmas Island after police used tear gas to stop them breaking out.

Mr Bowen said authorities now had control of the situation, and Australian Federal Police officers were expected to re-enter the centre today.

And as the Opposition demanded the government “take control” of their immigration policy, Mr Bowen declared protesters risked having their claims denied if they hadn’t already been rejected.

Mr Bowen said there was no suggestion any of those involved had been part of the Christmas Island disturbance.

But he said authorities were acting on the assumption the roof protesters had instigated the riot.

“These are by and large, I am advised, people who have received negative refugee assessments.”

And he said the protest would not help their case.

“If they think they will be accepted as refugees because of this sort of protest action, they have chosen the wrong government and the wrong minister because that won’t be happening,” Mr Bowen said.

Mr Bowen expected the damage bill would be in the millions of dollars.

“It’s completely unacceptable and people who are responsible, guilty of criminal acts, should not be given permanent residency,” Mr Abbott said.

“You’ve got to deny the people smugglers a product to sell and that’s what this government has comprehensibly failed to do.”

Acting Prime Minister Wayne Swan said the riots were unacceptable and could have a dramatic impact on the asylum claims of those involved.

“What we have seen here is obviously unacceptable behaviour,” Mr Swan said.

“If people have engaged in criminal acts that has a dramatic impact on their standing and what processes they go through.”

Mr Swan declined to detail the damage but said Immigration Minister Chris Bowen would give a fuller statement later today.

Immigration spokesman Sandi Logan said firefighters had contained the fires, and although people remained on the roof, the situation was otherwise in hand.

The asylum seekers still on the roof are reportedly calling for a meeting with the immigration department, but Mr Logan said case managers would continue to be their first point of contact.

“Until they come down, we won’t be negotiating, but we are working and managing to get them down from the roof.

Guards had had to “take cover and retreat” during the riots, Mr Logan confirmed, noting that they had not been armed.

“With daybreak now we’re doing an assessment of the damage. We’ll have structural engineers and assessors coming,” he said.

There will be a police investigation before any charges can be laid.

“There may well be charges laid from this investigation.” 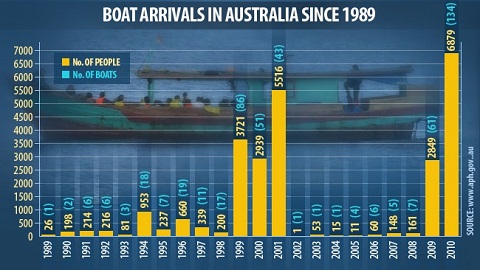 Graphic showing the number of asylum seekers who have arrived in Australia by boat since 1989. Graphic: Matt Pike News Limited
Around 400 asylum seekers are housed at the detention centre.

Firefighters were unable to enter the Villawood detention facility, just outside Sydney, during the riots due to safety concerns.

NSW Police maintained a security perimeter outside the centre due to jurisdictional limits, keeping scores of onlookers a safe distance away.

At the same time, Australian Federal Police and the centre’s security force moved non-protesting detainees to safe areas within the centre.

Fire crews had through the night battled at least three major fires from outside the centre, because detainees were running amok inside the centre.

Ten fire trucks rushed to the facility, in Sydney’s southwest, about 10.30pm yesterday.

Fire Superintendent Chris Jurgeit said three ladder trucks had hoses in elevated positions, dousing a series of buildings, demountables and sheds that were on fire.

“We can’t get too much water into the structures,” Supt Jurgeit said. “It’s like a prison fire. We don’t want to put firefighters at risk.”

Refugee advocate Brami Jegan said she got to the centre about 1am and spotted pockets of fires, but, “It didn’t seem to be too out of control.”

An hour later, it was clear at least one building was going up completely.

She believes stress and frustration were behind the riots.

“What’s happened is an absolute act of desperation. It’s a cry out for help.”

Some have been at Villawood for close to two years, Ms Jegan told ABC Radio.

“It’s so obvious the profound psychological effects that mandatory and prolonged detention is having on these people, these human beings,” she said.

“They’re always being threatened with being sent back.

“They live in this constant fear, and that’s really, really harmful to anyone’s mental health.

“They’ve got to the point now where they’re like, what are we even doing here, we’re just in prison, in indefinite prison in your country.”