You are at:Home»Refugees»Australia’s deadly refugee system 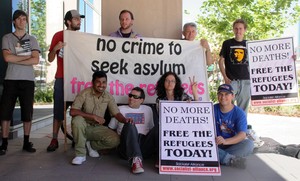 But they failed to bully East Timor into agreeing to an Australian detention centre on its soil.

However, East Timor’s foreign minister, Zacarias da Costa, did not even attend the summit. He maintains East Timor has bigger problems than becoming Australia’s offshore prison.

After almost a year in detention, 20-year-old Afghan refugee Mohammed Asif Atay hanged himself in the belief he would not get asylum.

Pamela Curr from the Melbourne-based Asylum Seeker Resource Centre told ABC’s AM: “This boy couldn’t understand why he was still waiting when those who’d come in the last two months had got their decisions.

“And what I’m told by his friends is that he went quietly to his room and locked the door.

“When they went to the room and found the door locked they broke it down but it was too late.”

At least one further suicide attempt was made in Curtin on March 30. A 26-year-old Tamil refugee was reported to have hanged himself from a tree.

More than half the 1200 people held in Curtin had received rejection letters. The six-month visa freeze of Afghan refugee claims from April to October last year has also prolonged the imprisonment for many.

A refugee in Curtin told RAC: “[There] is anger and upset all through the detention centre. There is no hope in here now. There is just rejection, rejection.”

The two suicides of Afghan refugees, who were both from the persecuted Hazara minority, reveal the growing humanitarian crisis for refugees in Australia. Five refugees have taken their lives in the past seven months.

The deaths have also prompted new demands from refugee advocates to put a moratorium on deporting Afghan refugees because the Australian government cannot guarantee their safety and continued rejections were worsening the crisis in detention.

The United Nations High Commissioner for Refugees says Afghanistan was the world’s second largest source of asylum seekers in 2010 (Serbia was the biggest).

More than 1.1 million Afghan refugees live in refugee camps in Iran and Pakistan, most without access to UN agencies.

The UN refugee agency estimated in June 2010 that “43.3 million people were forcibly displaced worldwide at the end of 2009”.

But the number of refugees to voluntarily return home had fallen to its lowest level in 20 years.

More than 70% of the world’s refugee population is located in the global South. And for industrialised countries that accept refugees, Australia does not even rank in the top 10.

The Australian government’s inadequate quota for humanitarian visas —13,500 each year — means applicants waiting in desolate and dangerous refugee camps in Third World nations face the decision of an excruciating wait or a risky journey.

There is a huge movement of people escaping violence and war in Afghanistan, Iraq, Sri Lanka and other war-torn areas. Of the few thousand that reach Australian waters, many thousands more endure horrific conditions in so-called transit countries such as Malaysia, Singapore, Thailand and Indonesia.

The Bali Process agreement was a new step in Australia’s bid to “stop the boats” — a mantra repeatedly chanted by the Liberal/National opposition and carried out in practice by the Labor Gillard government.

Through the International Organsaition for Migration and the Australian Federal Police, the Australian government funds countless efforts to stop refugees in Third World Asian countries, lock them up or forcibly return them to their dangerous homelands.

When they defy the odds and reach Australian waters, the federal government uses other tactics to deny their rights as refugees.

Australian territories have been excluded from the migration zone for this reason. Refugees who first land in an “offshore excised place” — including Christmas Island and Ashmore Reef — can be refused their legal rights, right to family reunion and right to appeal.

A March 25 article in The Australian revealed how this discriminatory policy is abused. It reported that 150 asylum seekers, apprehended at sea by border customs, were taken to a remote beach at Ashmore Reef and told to get off the ship.

Because they “took their first steps” in a place excised from the migration zone, the asylum seekers could be denied access to Australian courts.

The Australian Greens said the episode exposed the “farcical” nature of the government’s offshore processing policy.

It is farcical. But the recent asylum seeker deaths show Australia’s refugee system is also deadly.

Refugees, who only wish for safety and a place to call home, endure all of this only to finally lose hope in Australia, a first world country with the gall to call itself “compassionate”.