You are at:Home»Refugees»Hazara MP urges humane treatment of asylum seekers 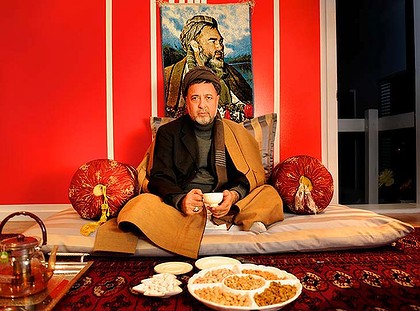 THE federal government’s toughened policy on Afghan asylum claims – and the suicide of two young Afghan men in detention centres – has come under fire from a prominent Afghan parliamentarian.

The arrival of top Hazara MP Mohammad Mohaqiq in Australia to plead that Hazara boat arrivals be treated humanely and given assistance on Australian soil – in the same spirit that Australian troops are fighting the Taliban in the homeland they fled – will raise the pressure on the Gillard government’s pledge to forcibly return rejected Afghans.

”I don’t think it would be fair to send them back,” Mr Mohaqiq said in Melbourne yesterday. He said he had specifically come to Australia to protest to Immigration Minister Chris Bowen about the length of time Hazaras are spending in detention and two suicides at the remote Curtin and Scherger detention centres last month.
Advertisement: Story continues below

”Some people are spending a year in detention and this really concerns me,” Mr Mohaqiq told The Age. ”I am against people smuggling and people entering illegally, but these people whose lives are endangered and made it all the way here, I would like the government to consider their cases kindly and save them.”

Mr Mohaqiq said ”it is not only Australia they come to”, and the number of asylum seekers arriving by boat here was far lower than the 2 million who have fled to Pakistan and Iran.

”The Australian government have forces in Afghanistan and are assisting with security and reconstruction. For the people who have left their country for reasons of security, or their homes or reputations are in danger, to assist them here would be part of assisting the Afghan people.”

No Afghans have been deported this year, but about 50 rejected asylum seekers are reaching the end of the appeals.

The government says it has struck a deal that allows for the forcible return of rejected asylum seekers, but this has been disputed by several key Afghan politicians.

Mr Mohaqiq said he was not opposed to Afghans returning to their home country if they chose, but he ”by no means supports their involuntary return”.

”The people in detention have come from areas where they are in contact with the Taliban. They have escaped from places like Oruzgan, where they faced bitter experiences last year. For example, in Oruzgan 1000 families have left the area and gone to unknown destinations. Some have made it to different corners of the world, including Australia, and they are affected by the bitter experience. We would like the Australian government to consider their cases under its humanitarian program and support them and assist their cases.”

A spokesman for Mr Bowen said the agreement ”allows for the sustainable return of those Afghans not considered to be genuine refugees to Afghanistan. It’s the preference of the governments of Australia and Afghanistan, and the United Nations High Commissioner, that these returns be voluntary wherever possible.”

Amin Saikal, director of the Centre for Arab and Islamic Studies at the Australian National University, said Mr Mohaqiq was one of the three most important Shiite leaders in Afghanistan and had a powerful voting block behind him in parliament.