You are at:Home»Refugees»Afghans to be deported after bids rejected 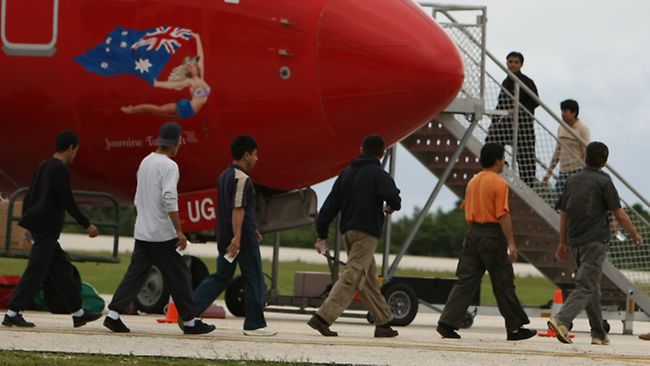 Afghans to be deported after bids rejected

DOZENS of failed Afghan asylum-seekers are facing deportation after the federal government persuaded authorities in Kabul to agree to their forced repatriation, despite fears for their safety. Immigration Minister Chris Bowen said his department was finalising plans to return a “small caseload” of about 50 people whose claims for refugee status had been rejected.

The Afghans are mostly men and are held on the mainland.

Mr Bowen said his department was “nearing the end of the process” and involuntary repatriations of Afghans would begin “over the coming months”.

The move comes despite deep concerns held within the Afghan embassy in Australia about forcing asylum-seekers to return to the country, still embroiled in war and where ethnic Hazaras, who make up the bulk of those seeking asylum, still face persecution.

In January, the Gillard government signed a memorandum of understanding with the Afghan government, allowing for asylum-seekers whose claims had been rejected to be sent home.

But Kabul’s envoy to Australia, Amanullah Jayhoon, insisted the deal applied only to voluntary returns. “It is very clear about voluntary readmitting. The word ‘force’ has not been used in any part of it,” Dr Jayhoon said.

However, after further discussions with Kabul, Mr Bowen says the agreement has now been cemented and deportations will begin shortly. “The agreement very clearly allows for involuntary returns,” Mr Bowen said.

A diplomatic source said there had been “very little consultation” over the MOU and the Afghan government had been given “very, very little say” in the decision.

“I can’t see any reason why the Afghan government would want them back, but they have to say it.”

The source said the decision was “very unfortunate” as failed asylum-seekers, particularly Hazaras, could face retribution for having fled their homeland.

“The way they get treated back home in Afghanistan is a disgrace,” the source said. “If it’s found they tried to escape, they could be killed.”

The plan for forced repatriations comes as the government moves to cut the number of asylum-seekers being held in overcrowded, under-staffed immigration detention centres around Australia, following last week’s riots and fires at Christmas Island.

Detainee numbers are at a record high after the arrival of 207 boats carrying 10,326 people since the beginning of 2009.

Afghans have been by far the biggest single group, making up 46 per cent of “irregular maritime arrivals” in the past two years.

Until last year, Afghan asylum-seekers enjoyed a success rate as high as 96 per cent, which was one factor that prompted the government to freeze new applications from Afghans and Sri Lankans last April.

The freeze on Afghans was lifted late last year, but their claims are now being rejected at a rate of about 50 per cent because the government argues it is safe for them to return home.

The MOU was endorsed by the UN High Commissioner for Refugees, but The Australian understands there is concern at high levels within the UNHCR about the agreement.

The chief executive of the Refugee Council of Australia, Paul Power, says the council has received expert advice that it is still dangerous for ethnic Hazaras to be returned to Afghanistan.

He said the council was concerned a UNHCR offer to undertake “ad hoc monitoring” of returnees would not be sufficient to guarantee their safety.