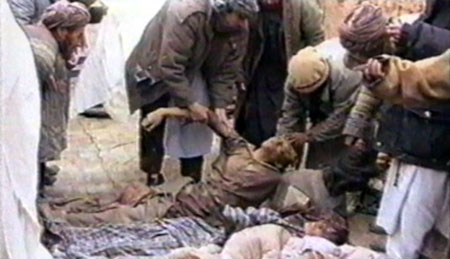 YAKAWLANG, Afghanistan — Ibrahim still has vivid nightmares about the slaughter on the morning of January 11, 2001 that he miraculously escaped.

Pumped up by victory after seizing control of Ibrahim’s home district of Yakawlang, blood-thirsty Taliban fighters set upon Afghanistan’s most oppressed ethnic group, the Hazaras, in typically ruthless fashion.

“They lined us up in two rows and started shooting us one by one,” said Ibrahim, a Hazara who is 32 but looks 10 years older in his worn black tunic and brown jacket, topped off by a white turban.

“I couldn’t stand the sight of all that blood, and I fainted,” he told AFP.

Ibrahim was one of the lucky ones — the United Nations and other rights organisations say the insurgents killed around 350 Hazaras on that day.

He and one other wounded survivor headed for the mountains, where they hid until the fall of the Taliban more than nine months later.

Ten years on, the central province of Bamiyan is one of the most peaceful in war-torn Afghanistan and for that reason is expected to be among the first to come under the control of Afghan security forces.

But Hazaras like Ibrahim fear that when NATO troops withdraw, the way will be open for the rebels they call “animals” to return.

As Shia Muslims, the Hazaras, who make up much of the population of central Afghanistan, were a prime target for the mainly Sunni Taliban.

The Taliban famously blew up Bamiyan’s historic Buddha statues, but they also destroyed what little sense of security the Hazaras, who occupy the bottom rung of Afghan society, used to enjoy.

From the victims shot so many times their heads were left pulverised to the tribal elders who were cut to shreds with knives, accounts of Taliban brutality abound in this province, around 130 kilometres (80 miles) west of Kabul.

In the minds of Bamiyan’s residents, the threat of the militants’ return is ever-present.

“The Taliban are the worst creatures that God has ever created. We haven’t heard from them for 10 years, but we are still afraid,” said Sayed Zia of Koshkak village, high in the mountains that surround the provincial capital, also called Bamiyan.

“For us, the Taliban are just animals, or even worse,” added his neighbour Afzal.

Afghan President Hamid Karzai is due to announce on Monday which will be the first provinces to be handed over to Afghan security forces this summer, the first stage of a transition process that will see foreign troops pull out by 2014.

The Hazaras of Bamiyan do not believe the Taliban will return immediately if NATO forces leave the province.

“The Taliban are not active in the province because no one supports them,” said 36-year-old Nasrullah Waezi, a young mullah from the provincial capital.

But they do fear that if NATO leaves Afghanistan altogether, the Taliban could surround Bamiyan and close in on the province, as they did in 2001.

“Once NATO leaves the country the Taliban will be here in a week,” said Asif, 30, who fought against the insurgents in Yakawlang in 2001.

Bamiyan’s deputy governor Hadji Qasim Kazemi echoed his fears, saying NATO must stay on if the fruits of a decade of peace, including new government buildings and the province’s first proper roads, are to continue.

“We want NATO to stay,” he told AFP. “Hazaras are peaceful people, but if intruders like Al-Qaeda or the Taliban come, they will fight.”

In the centre of the provincial capital, Ali Zafar, the imposing head of the local anti-Taliban militia, still goes by the title “commander.”

He now runs a hotel and says he has a comfortable life, but would not hesitate to take up arms again.

His friend, a tall, elegant man dressed in a traditional flat hat and a long grey coat, serves tea and smiles: “We have kept plenty of weapons, just in case.”

But the fight appears to have gone out of Ibrahim, who had one son at the time of the slaughter but now has two more and two daughters.