You are at:Home»Refugees»43 million refugees, a billion in abject poverty, the facts on asylum seekers & refugees and Australia’s shameful record 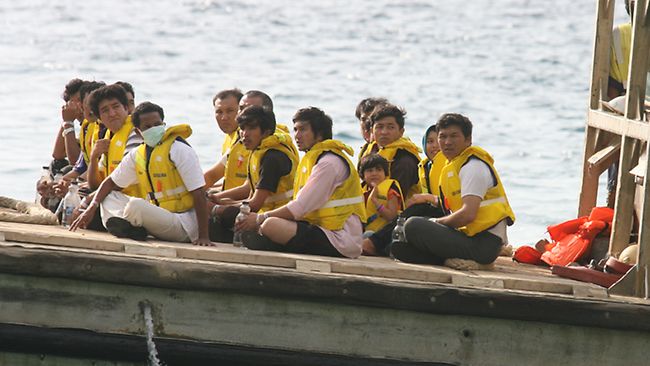 At least 43 million people displaced. At least 16 million refugees. Only 800,000 Asylum Seeker applications per year. Millions have not been counted. Millions are trapped. If you are a Hazara in Quetta, Pakistan there is are no holding camps, no UNHCR, no queues. My sister-in-law is of refugee-origin, Vietnamese, having arrived as a baby on a ‘boat’ in 1980. Afghanis, Tamils, Iraqis, Iranians are fleeing civil strife, persecution, war. Let us not forget anyone. Let us embrace the ideal of helping out one another.

Australia’s record in assisting our Asylum Seekers and Refugees is shameful. We fall short of our moral and legal obligations in assisting them. We turn people away we should not.

Plato argued that “To do injustice is more disgraceful than to suffer it.” In Australia during 2009 there were 8,427 applications by Asylum Seekers. However this is a small trickle of the world refugee problem. Many Australians are averse to the Asylum Seekers who risk their lives by journeying by sea in rickety old boats crewed by poor Indonesian fishermen who for a small payment to help their poverty stricken families are prepared to sacrifice five years of their lives in Australian jails. I have come across some of these people in my visits to our jails and this is the sacrifice they describe. The world’s refugee problem is an immense one yet Australia contributes very little in playing its part, which is short of its international obligations, to remedy it.

During September 2001, Australia implemented the Pacific Solution where it set up an offshore processing facility on the island of Nauru. This did not stop the boats. The facility at Nauru was merely another detention centre. What stopped the boats to Australia was that the Australian Navy turned them back to Indonesia. During the preceding three months prior to the implementation of the Pacific Solution 13 boats arrived in Australia. During the following three months after the Pacific Solution 14 boats attempted to reach Australia from Indonesia however John Howard, the Prime Minister, instructed the Australian Navy to turn them back to Indonesia. Yes, they were turned back. Some drowned on the return voyages. This inhumane policy is what discouraged boat people to Australia. To reach Australia Asylum Seekers are generally two weeks on the open seas, and often physically and mentally traumatised, hungry and distressed. Some drown. Some are dead on arrival, 64 to date. The idea of spending another two weeks at sea after being turned back, doubling up the risk of drowning obviously discouraged families from making the high risk journey. After all if they were to be turned back it was pointless to try. This is why Opposition leader Tony Abbott at one time declared that we he would ‘tow them back to sea’. This disgusting policy is the only proven way to stop the boats arriving. The only other way to stop the boats is to refuse Asylum Seekers their right to seek asylum. This is unless we are prepared to accept a more appropriate intake of refugees, for instance 50,000 people per year.

Most Australians, though they have some idea, are not aware of the real facts of the world’s refugee problem. The world’s displaced people number 42 million people. However there are also millions who have not been counted. 16 million of the 42 million are refugees. 27 million are internally displaced peoples uprooted by wars and natural disasters. The UNHCR (United Nations High Commission for Refugees) is caring, as best it can, for about 9 million refugees and half the displaced people. Each year there are some 800,000 Asylum Seeker applications worldwide. Australia’s 2009 8,427 Asylum Seeker applications appear insignificant compared to South Africa’s predicament. In the same year South Africa processed 207,000 Asylum Seeker applications. In the same year the United Kingdom processed 45,197 applications, the USA processed 38,080, France processed 34,400 and Canada processed 33,970. One of the world’s poorest countries, Sudan, processed 35,100. 80% of the world’s refugees are being hosted in the world’s developing countries, in the countries least able to afford them. Iran and Pakistan host millions of refugees. Pakistan, which endured the floods that ravaged most of the country, has 1.6 million of its own people internally displaced.

Where there is no UNHCR there are no queues. For instance hundreds of thousands of Afghani Hazaras who fled to Quetta, Pakistan have no road to anywhere. There is no UNCHR in Quetta. The Hazaras fled the Taliban, and even the nomadic Pashtuns who disregard them, and abject poverty and isolation. Should people not flee persecution and insecurities from for instance the autocracy of the Taliban, who despise the Hazaras, or from the worst aspects of the theocracy of Iran? Should we not have accepted all the Vietnamese boat people that we did during the Fraser years? My sister-in-law, who is very Australian, was a baby on one of the boats from Vietnam. I grew up with many Vietnamese and Cambodian friends who were of refugee-origin, who limped or dragged a leg because of a landmine injury and who had lost family to war or civil strife. What has changed from 1980 to 2010? What is it about ‘boat people’ that scares many Australians? Around the world many more people arrive by air than by sea in seeking Ayslum, however those arriving by air are not scrutinised and detained to the same extent as those arriving by sea. It is important to understand that many of the world’s Refugee holding camps do not ensure a queue. I have met many Somalian, Sudanese and Chadian Refugees who were in camps for instance in Kenya for anything between eight to sixteen years. If someone has no access to a queue and if the conditions are dangerous in the camps, as for instance in Quetta, Pakistan for the Hazaras, hence logically they are not jumping any queue, none exists, and therefore they are not taking anyones place.

Australia’s annual migration intake is thereabouts 300,000 people. Every two years Australia’s migration intake numbers about 600,000 which out-numbers the 580,000 Australians who identify as Aboriginal. The majority of Aboriginal leaders are not arguing against this intake into our country even though hundreds of thousands of Aboriginal people live in abject poverty. They argue only for the expedient elimination of disparity and racism. For more than a decade Australia has only accepted 14,000 Refugees each year. 14,000 people from a migration intake of thereabouts 300,000 people. Our Refugee intake equates to only 1.1 for every 1,000 Australians. The 1958 Migration Act makes it legal for boat people to seek asylum. The United Nations definitions of Asylum Seekers are underwritten by the right of people to be free from persecution however they are further underwritten by the right of people to life, liberty, security and the prospect of the most basic advancement. The United Nations Declaration of Human Rights argues against nations blighting themselves with self-regard and demands of nations a global responsibility which describes the common good and humanity. It is illegal to turn back boat people seeking Asylum as the Australian Government did in the last three months of 2001. Then again according to the United Nations Conventions the Northern Territory Military Intervention and the suspension of the Racial Discrimination Act were illegal, and once again Sections 25 and 51 of our Commonwealth Constitution where our Aboriginal people can be made ‘wards’ of States and Territories are in contravention to the principles and objects of UN Conventions.

Australia’s slow processing of Asylum Seekers will ensure that more detention centres will be built. Many Asylum Seekers are still being detained for more than a year and some up to two years. On Christmas Day 2010 there were 927 children in detention centres with half of them being unaccompanied minors. Community has been long prepared to billet them. When I was a kid in NSW my own migrant parents billeted children from flood ravaged rural towns. The detention centres are terrible experiences, places of deprivation and unnecessary confinement for peoples already traumatised by displacement, alienation, loss of family and the high risk journey. These centres only further build up trust issues between humanity. You only have to ask the my refugee advocate colleagues from the Refugee Rights Action Network who visit these detention centres. These RRAN stalwarts turn up with dictionaries because they are not provided by the government and with toys for the children. We are aware that women detainees have gone weeks without for instance underwear and tampons. Detainees, with no idea of when they will be released, heavily depend on these visits from RRAN’s volunteer membership. The myths that I would love to address are far too many for this Opinion Piece however I would like to close with a few more facts. No Asylum Seeker receives any additional or special Centrelink benefits and allowances. Once granted a visa they are entitled to only the equivalent of any Centrelink benefits that are available to other Australians. For instance a non-refugee and a refugee-origin single mother are entitled to the same fortnightly Centrelink benefit of $611.90. Australia’s intake of Asylum Seekers is one of the lowest in the world, and from a presumably prosperous country it is one of the world’s most shameful records. There is no need for an East Timor Solution, no need for a detention centre on Christmas Island, no need for detention centres, such as Curtin, in remote locations, no need for detention centres period. Australia cannot solve the world’s refugee problem or end the world’s wars however Australia can lead by example and take in its fair share of uprooted humanity, meet its prescribed foreign aid obligations, which it does not, close the detention centres and work with the Asylum Seeker claims from within community as happens with those who do not arrive by ‘boat’. And the only reasons some come by boat, and they do inspite of the thousands who have drowned, are because it is true that the so-called queues do not exist and that the conditions in neighbouring countries they have reached are appalling, where these countries are economically poor and overwhelmed by the large numbers of refugees, hosting numbers fifty to one hundred times more than Australia.

Indonesian people I know do not understand why Australia, a wealthy country by comparison to their own impoverished homeland, does not take in their fair share of refugees. They could not comprehend the inhumanity of the Australian Government to turn back boats in 2001. East Timorese journalist friends describe the same negative view of the Australian Government’s policies and inhumanity. Race and racism have many layers however it appears evident to most of South East Asia that Australia is hanging on to its out-dated racist identity. The Asylum Seekers I have met describe to me that the decision to leave their homeland was made with the deepest sorrow and a myriad of fears – and that they knew the risk to themselves and their children on the high seas in the search for hope. They describe that extended families gave up much of what little they had to give some hope to a few of their members in faraway lands, where war, civil strife, persecution and abject poverty do not exist.