You are at:Home»Refugees»Australia»Protest calls for end to kids in detention 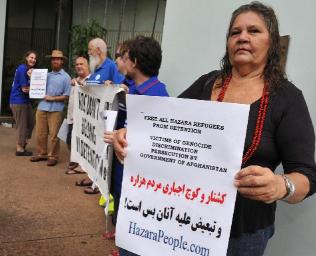 Protest calls for end to kids in detention

DAMIEN McCARTNEY
PROTESTORS have taken to the pavement outside Darwin Magistrates Court to campaign to get children out of detention centres. The protestors were there to support teenage asylum seekers who were facing charges over a riot at Darwin Airport Lodge last month.

But they were prevented from entering the courtroom after Chief Magistrate Hilary Hannam declared it a closed court.

“We’re here supporting the young boys who are in court today, but the court is closed so we cannot go in there and offer our support,” said a spokeswoman for the group who did not want to be named.

“All children need to be released from detention, we don’t support locking anyone up – particularly children,” she said.

“We are really happy the government has announced they are moving all children out of detention, they made that announcement last year, and there are still 1000 kids in detention.”
“They have said they will all be out by June this year, so we are holding them to it,” she said.

“It’s been painted as an organised and a frightening riot, what we’re saying is when you lock up people, particularly teenage boys and you don’t cater to their needs, you don’t tell them what’s going on, and keep them in long term mandatory detention, things are going to go wrong.”