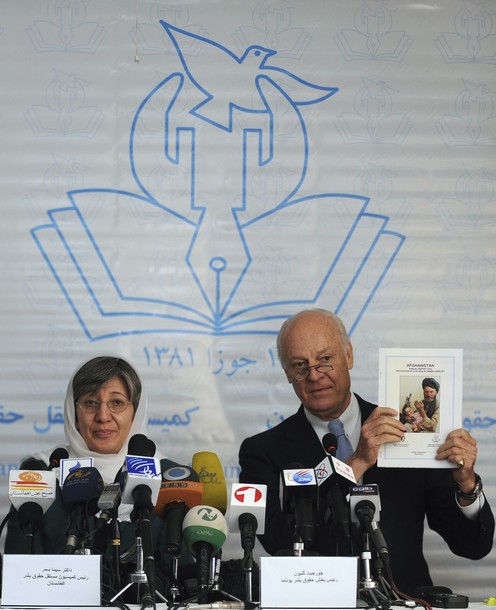 A total of 2,080 or 75 percent of civilian death toll were attributed to anti-government insurgents, up 28 percent from 2009, according to the report.

The report also said that 55 percent of all the fatalities, or 1,141 deaths had been inflicted by suicide bomb attacks and Improvised Explosive Device (IED) blasts.

Afghan and NATO-led forces were responsible for 440 civilian deaths or 16 percent of all the fatalities.

Other 257 or nine percent of civilian deaths were not caused by any party to the conflict, it said.

“We all know that there is no military solution to the conflict, ” said Staffan de Mistura, the head of UNAMA, at a joint press conference with Chairperson of AIHRC Sima Samar and the visiting UN Assistant Secretary-General for Human Rights Ivan Simonovic.

“We also know that everybody agrees there should be search for political solution, but now we are asking formally, strongly and firmly on behalf of Afghan people that 2011 should also see a search for the protection of civilians by all sides,” de Mistura said.

“Protection of civilians in armed conflicts means protection of basic human rights such as right to life, security and freedom of movement and respect for the international humanitarian law by all parties to the conflict,” said Simonovic.

Accountability for violation of laws is the only effective way to prevent civilians from being killed or injured in the future, he emphasized.

The UN and AIHRC urged all the parties to take immediate steps to reduce civilian casualties and made 2011 the year of increasing protection of Afghan civilians, he said.

The report also called on foreign forces in Afghanistan to make their investigation and reporting on civilian casualties more transparent, maintain and strengthen directives restricting aerial attacks and the use of night raids.

Head of Afghan human right watchdog Samar said that her group is concerned over 105 percent increase in assassination that left 462 civilians dead with half of them in the country’s south where Taliban insurgents are active.

The number of children casualties rose by 21 percent while women casualties increased by six percent in conflict-ridden country, Samar added.

The top UN official de Mistura read out his messages for Taliban saying: “We know you will be saying those figures were inaccurate, but facts are facts.”