You are at:Home»Refugees»Australia»Story of today 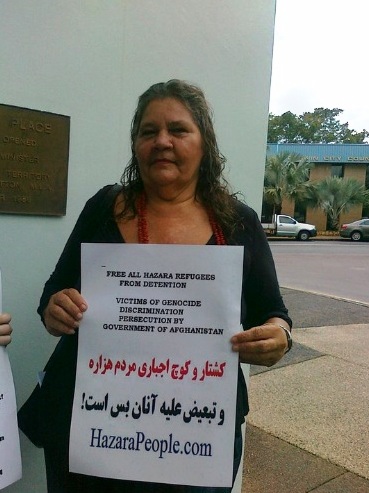 This morning in Darwin’s Magistrate Court six teenage Afghan asylum seekers detained at Airport Lodge Detention Centre were on trial for possession of a weapon during a fracas that turned ugly with other teenage asylum seekers from Iran on Februrary 9 this year when riot police were called to calm down the youths after injuries were incurred. The youths are from the Hazara ethnic minority. Mohamadi Ali Changazy, Mohammadi Khan, Mosavi Sayed, Amanulla Razaei, Ameer Sabiri and one other unnamed youth emerged from the court after two hours during which a group of supporters from the Darwin community including aboriginal Larrakia elder June Mills held vigil outside. The group displayed banners calling for all children to be released from detention and some supporters called for an end to the detention of Hazara people who face persecution in Afghanistan and if deported, certain death. The Karzai regime itself has stated that their safety cannot be guaranteed as they are targets of the Taliban. “I take seriously my role as an elder in my community and on my land. We would not deal with young people in this way. If I had my way there would be a traditional welcome to country and teaching. As a mother, I’m concerned that these young people don’t have that family structure of kinship that we have in our system, automatically having aunties and uncles to support them. These young people have done nothing wrong. They are being punished rather than treated with compassion” said June Mills. 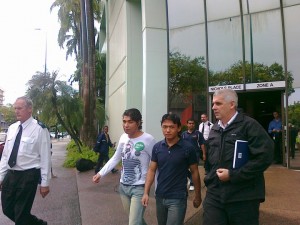 The boys appeared calm and compliant as they boarded a Serco van to another undisclosed hotel location in Darwin away from the Airport Lodge. Darwin has now three detention facilities with the Asti Hotel and Airport Lodge owned by Australian citizens. There has been controversy connected to the provision of accommodation in private facilities, with many in the wider community questioning the huge profits being made by housing detainees. Mr John Robinson, owner of the Airport Lodge – a series of freight containers joined together outside the airport terminal itself-reportedly collecting one million dollars in the last six months from the Department of Immigration. The issue of detaining minors however and their circumstances has been sharply criticized by many, including local social workers and children’s welfare advocates. Many of the unaccompanied minors are still receiving inadequate educational services despite promises from Minister Bowen that they could attend local schools and since the incident the soccer activities have been suspended. Another detention centre to be built at Wickham Point has been announced recently to house only male detainees, and Airport Lodge set to expand, indicating that release into the community by June for minors as promised by Julia Gillard now seems unlikely.