You are at:Home»Art»Bamiyan Buddhas once glowed in red, white and blue Bamiyan Buddhas at the end of the 10th century. Later damages are made visible. (Photo: A. Metzinger)
Art

Bamiyan Buddhas once glowed in red, white and blue

By Hazara People on February 25, 2011 1 Comment
Bamiyan Buddhas at the end of the 10th century. Later damages are made visible. (Photo: A. Metzinger)
Share this story

The monumental Buddhas of Bamiyan once shone in glowing colors. Restorers from the Technische Universität Muenchen (TUM) have analyzed hundreds of fragments of the statues that were blow up by the Taliban. They have, for the first time, been able to reliably date the period in which they were sculpted, and have also studied the technically brilliant method of construction. A process developed jointly with a company set up by a TUM graduate could stabilize the porous rock, paving the way for a reconstruction of this ancient world heritage site. Bamiyan Buddhas at the end of the 10th century. Later damages are made visible. (Photo: A. Metzinger)

The world watched in horror as Taliban fanatics ten years ago blew up the two gigantic Buddha statues that had since the 6th century looked out over the Bamiyan Valley in what is now Afghanistan. Located on the Silk Road, until the 10th century the 55 and 38 meter tall works of art formed the centerpiece of one of the world’s largest Buddhist monastic complexes. Thousands of monks tended countless shrines in the niches and caves that pierced a kilometer-long cliff face. 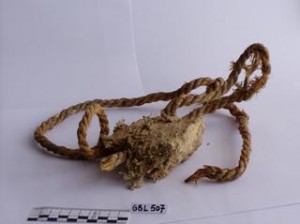 The bottom layer of the Bamiyan Buddhas' plaster was held in place with ropes.

Since the suppression of the Taliban regime, European and Japanese experts, working on behalf of UNESCO and coordinated by the International Council on Monuments and Sites (ICOMOS), have been endeavoring to secure the remains and restore access to the statues. The fragments are being very carefully examined, as prior to the explosion the Buddha statues had barely been researched. For a year and a half now, scientists from the Chair of Restoration, Art Technology and Conservation Science have been studying several hundred fragments at the TUM. Their findings not only contribute to our understanding of this world cultural heritage site, they may also enable the parts recovered to be reassembled:

Coloration: “The Buddhas once had an intensely colorful appearance,” says Professor Erwin Emmerling. His team discovered that prior to the conversion of the region to Islam, the statues were overpainted several times, presumably because the colors had faded. The outer robes, or sangati, were painted dark blue on the inside and pink, and later bright orange, on top. In a further phase, the larger Buddha was painted red and the smaller white, while the interior of the robes was repainted in a paler blue. The graphic reconstruction undertaken by the TUM researchers confirms ancient traditions: sources as far back as the 11th century speak of one red Buddha and one moon-white. The other parts of the figures may possibly have had a white priming coat, but that can no longer be proven beyond doubt.
Construction technique: The statues themselves were hewn out of the cliff; however, the flowing garments were formed by craftsmen using clay, which was applied in two or three layers. The remains display an astonishing degree of artistic skill. “The surfaces are perfectly smooth – of a quality otherwise only found in fired materials such as porcelain,” says Professor Emmerling. In the clay, the TUM conservators found straw and chaff which absorb moisture, animal hairs which stabilize the plaster like fine glass fibers, and quartz and other additives which prevent shrinkage. The bottom layer of plaster was held in place with ropes attached to small wooden pegs. This allowed the craftsmen of old to apply unusually thick layers of up to eight centimeters. “These have survived not only nearly 1500 years of history, but even the explosion in some parts,” adds Professor Emmerling in amazement.
Dating: Previous attempts to determine when the statues originated were estimates based on the style of the Buddha’s robes or similar criteria. Now mass spectrometer tests at the ETH Zurich and the University of Kiel have determined the age of the organic material in the clay layers. The TUM scientists have, as a result, been able to date the construction of the smaller Buddha to between 544 and 595 and the larger Buddha between 591 and 644.
Conservation: How can the fragments at this world heritage site be conserved for the future? The ICOMOS teams have in the meantime stacked the ruins in temporary warehouses in the Bamiyan Valley. Larger pieces have been covered over in situ. “However, that will only last for a few years, because the sandstone is very porous,” Professor Emmerling explains. Conventional methods of conservation are out of the question. “On this scale, under the climatic conditions in the Bamiyan Valley, the behavior of the synthetic resins usually used would vary too widely relative to the natural rock.” Expert conservator Professor Emmerling has therefore joined forces with Consolidas, a company founded by a TUM graduate, to refine a process recently developed by the latter for possible use on the Buddha fragments: instead of synthetic resins, it might be possible to inject an organic silicon compound in the stone.
In addition, the TUM conservators are also working on a 3D model of the cliff face that shows all of the pieces in their former position. Professor Emmerling considers a reconstruction of the smaller Buddha to be fundamentally possible – he argues in favor of reassembling the recovered parts, rather than attempting to reconstruct the original condition in antiquity. As far as the larger Buddha is concerned, in view of its depth of around 12 meters, Professor Emmerling is more skeptical. The smaller figure with a depth of around two meters was more along the lines of a relief. However, even to restore this figure, there are political and practical obstacles to overcome. Conservation of the fragments would require the construction of a small factory in the Bamiyan Valley – alternatively some 1400 rocks weighing up to two tons each would have to be transported to Germany. A conference to be held in Paris next week will consider the continuing fate of the Buddhas. 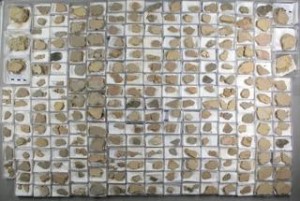 Restorers from the Technische Universitaet Muenchen have analyzed hundreds of fragments of the Bamiyan Buddhas.