You are at:Home»Human Rights»Hazara woman seeks justice against thugs who killed her son 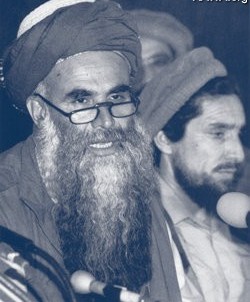 Before The Afshar massacre of Hazaras in 1993, jihadi leader Abdul Rasool Sayyaf told his officers, "Don't leave anyone alive -- kill all of them."
Human Rights

Hazara woman seeks justice against thugs who killed her son

By Hazara People on February 9, 2011 0 Comments
Before The Afshar massacre of Hazaras in 1993, jihadi leader Abdul Rasool Sayyaf told his officers, "Don't leave anyone alive -- kill all of them."
Share this story Even Mother Nature was cruel on the day 15 years ago when rampaging thugs chopped off Marzia’s fingers for a gold ring and shot dead her nine-year-old son when he cried out to object.

It was a bone-chillingly cold morning, she recalls, when militia loyal to Pashtun warlord Abdul Rab-Rasoul Sayyaf – now a parliamentarian – captured her village, west of Kabul and dominated by ethnic Hazaras.

In a post-assault attack on the village, gunmen smashed into her simple house, says the illiterate housewife in her 40s. They demanded a gold ring she was wearing.

“I couldn’t take it off. One of them stepped forward with a bayonet and said ‘I will take it off,’ and chopped my fingers,” she says, holding up a hand missing the thumb, fore and middle fingers.

Her son Samad cried out. “When he chopped my fingers, my son jumped towards me and wailed ‘Oh, nanai (mother)’. Another man turned his gun and fired at him,” she says, her lips quivering. “My son died in my arms,” she says, wiping away tears with the palm of her butchered hand.

The number of dead in what has become known as the Afshar Massacre is not clear: a United Nations report says 300 civilians, almost all ethnic Hazara Shiites, were killed but villagers say even more were slaughtered, some decapitated.

Hundreds of Hazara men were rounded up and corralled into forced labour – or just disappeared. Villagers claim 1,200 men were taken away.

One was Marzia’s husband, Sayed Mohammad.

Sitting near his wife in their one-room home, he says he was accused of being a combatant, beaten, and forced to dig trenches and wash dishes for his captors for six months before he was freed, half-paralysed and mentally ill.

The February 1993 Afshar campaign was one of the worst episodes of the 1992-1996 civil war that erupted when internationally supported militias that had driven out the Soviet occupiers turned on each other.

The ethnic-based factional fighting – in which all sides are accused of atrocities, including the Hazara – killed around 80,000 civilians in Kabul alone, according to rights groups.

An almost daily barrage of rocket and artillery fire reduced large parts of the attractive capital to rubble.

The conflict was ended when the Taliban Islamic militia took power in 1996, initially welcomed for restoring calm after the chaos. But they too brought terror before being ousted in a US-led invasion late in 2001.

“The Afshar Massacre is one of the worst brutalities of the civil war,” says Horia Musadeq from the Afghanistan Independent Human Rights Commission.

“It is just one example of hundreds of incidents Afghans suffered. Hundreds of civilians were killed, women were raped and many men were captured, held and tortured,” he said.

A 2005 Human Rights Watch report implicates Sayyaf – now an ally of President Hamid Karzai – and other figures such as Burhanduddin Rabbani, president at the time and now also in parliament.

“The Afshar campaign was marked by widespread and serious violations of international humanitarian law,” it says, and calls for “justice-seeking mechanisms to sideline past abusers from political power”.

Karzai in late 2006 signed a Peace, Reconciliation and Justice Action Plan that seeks to “establish accountability” – which some fear could see a backlash from strongmen worried about having to face a judicial process.

Just weeks later the parliament voted in a bill that would give groups and factions amnesty against prosecution. Its position on individuals is vague.

Karzai admitted at a meeting in December, at which Marzia was among several victims who pleaded for justice, that this was a concern.

“There are tyrants in our land,” he said. “We must move with lots of caution so as not to cause lots of noise and more human rights violations.”

The United Nations has meanwhile expressed disappointment at the delays in implementing the action plan, which also provides for investigations of atrocities and memorials for those killed.

Marzia says she wants justice, even if only from “great God”.

Responding to such calls is vital for Afghanistan to recover from its three decades of war and to revive the national spirit, Musadeq says.

“We can’t survive as a nation unless we give justice to war victims. Can you imagine that those who have killed her or others’ children sit in the parliament, live in palaces and drive Landcruisers?” she asks.

“When Sayyaf speeds past a victim in his Landcruiser, kicking up dust, think how it feels. It feels really bad.”