You are at:Home»Refugees»Australia»Freedom or Death 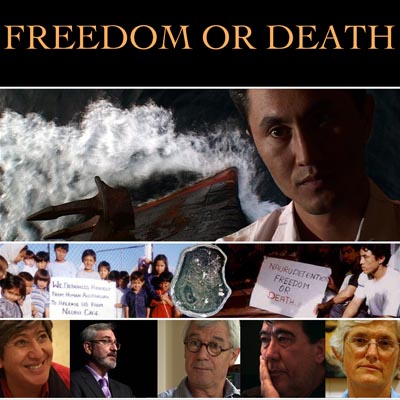 offshore detention center on the impoverished Pacific Island of Nauru. This strong human story is captured through personal interviews with key people who were directly involved with the issue, united by a common concern for the refugees. It is the inspiring story of Chaman Shah Nasiri, a Hazara refugee from Afghanistan, who acted as a representative for the detainees. When claims for asylum were rejected following prolonged and indefinite incarceration, a group of detainees began a hunger strike in a final act of desperation. Their official statement was “freedom or death.” This documentary explores a deeply controversial chapter in our history exposing human rights abuses, which were deliberately hidden from the international community. It brings light to key issues including children in detention, the forced separation of families, Nauru’s environmental degradation, and the hunger strikes. The documentary features interviews with Frederika Steen, Hassan Ghulam, Chaman Shah Nasiri, Julian Burnside QC, Andrew Bartlett and Dr. Sima Samar.