You are at:Home»News»Karzai favorite no better than Taliban? 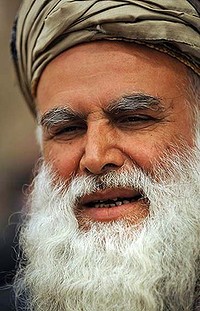 Before the Afshar massacre of Hazara civilians in 1993, jihadi leader Abdul Rasool Sayyaf told his officers, "Don't leave anyone alive -- kill all of them." Photo: Reuters
News

Karzai favorite no better than Taliban?

By Admin on February 1, 2011 0 Comments
Before the Afshar massacre of Hazara civilians in 1993, jihadi leader Abdul Rasool Sayyaf told his officers, "Don't leave anyone alive -- kill all of them." Photo: Reuters
Share this story

KABUL, Afghanistan, Jan. 31 (UPI) — A candidate for speaker of the Afghan Parliament is a wanted war criminal and the wrong choice for a country bent on political reform, a rights advocate said. Afghan President Hamid Karzai backed the nomination of Abdur Rab Rasul Sayyaf as the next speaker of the Afghan Parliament. London’s The Independent newspaper reports that Sayyaf is allegedly responsible for the 1993 massacre of the minority Hazara community and stands accused of training Khalid Sheik Mohammed, the self-proclaimed mastermind behind the Sept. 11, 2001, attacks on the United States.

Rachel Reid, an expert on Afghanistan at Human Rights Watch, said Sayyaf is the wrong man for the job at a time when Kabul is struggling with political reforms.

“Instead of being held to account for these crimes, he has climbed ever higher above the law, now trying to become the chief law maker,” she was quoted by the Independent as saying. “This is a terrible prospect for the victims of atrocities by his forces, and for women rights.”

She said Sayyaf was no better than the Taliban.

The minority Hazara community took 59, or about 24 percent, of the 249 seats up for grabs in the September vote for the Wolesi Jirga, the lower house of Parliament.

The Wolesi Jirga convened Wednesday after Karzai swore in the members.

© 2011 United Press International, Inc. All Rights Reserved. Any reproduction, republication, redistribution and/or modification of any UPI content is expressly prohibited without UPI’s prior written consent.