You are at:Home»Refugees»Afghanistan denies deportation deal with Australia 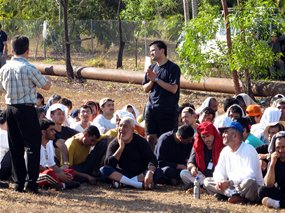 There are more than 2,500 Afghan asylum seekers in detention in Australia. (ABc: Brooke Bannister)
Refugees

By Hazara People on February 1, 2011 3 Comments
There are more than 2,500 Afghan asylum seekers in detention in Australia. (ABc: Brooke Bannister)
Share this story

There are more than 2,500 Afghan asylum seekers in detention in Australia. (ABc: Brooke Bannister)

The Afghan government has denied an agreement signed with Australia will allow the deportation of unsuccessful Afghan asylum seekers.

Afghanistan signed a deal with Australia and the United Nations High Commissioner for Refugees two weeks ago, allowing the forced return of failed asylum seekers.

But Afghanistan’s Minister of Refugees Jamaher Anwary now says the memorandum of understanding did not include anything about deportation.

The Afghan government is under pressure from some human rights groups to scrap the deal because of concerns about the safety of returnees.

Dr Anwary says there is no pressure or force in the protocol and it is against international rules.

The head of the Kabul sub-office for UNHCR, Grainne O’Hara, says the deal does allow for forced returns and the Afghan government knows it.

“I think the Afghan government, having gone through a very lengthy process of negotiation with the Australian Government, is quite fully aware of the terms of the agreement,” Ms O’Hara said.

There are more than 2,500 Afghan asylum seekers in detention in Australia. Forty-nine have had their applications rejected after going through the legal process.

The agreement says it is preferable if failed asylum seekers return to Afghanistan voluntarily and provides assistance if they do. But it still allows for deportation as a last resort.

This is how Immigration Minister Chris Bowen described the significance of the deal when it was signed two weeks ago:

“Never before today has there been an involuntary return from Australia to Afghanistan. So this underlines the importance of today,” he said.

“Without today’s agreement it would be impossible to contemplate involuntary repatriation to Afghanistan.”

But since then, the Afghan government has come under pressure from human rights activists to scrap the memorandum because of concerns about the safety of returnees.

Nader Nadery from Afghanistan’s Independent Human Rights Commission says the Afghan government should never have signed the agreement and will not be able to protect those who are deported.

“Afghanistan is not yet secure and its institutions are not yet capable of providing protection to those who would be sent back to Afghanistan,” he said.

It is unclear whether there is genuine confusion over the detail of the agreement, or if the Afghan government is simply trying to find a way out after receiving a negative response at home.