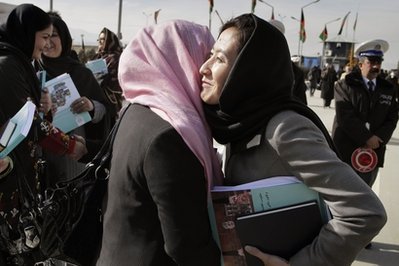 Female members of the new parliament congratulate each other after the inauguration of the new parliament in Kabul, Afghanistan on Wednesday, Jan. 26, 2011. President Hamid Karzai swore in the country's new parliament Wednesday in a ceremony that marked the end of a drawn-out battle over whether the lawmakers would be able to start work despite ongoing investigations into electoral fraud.(AP Photo/Musadeq Sadeq)
News

By Hazara People on January 26, 2011 0 Comments
Female members of the new parliament congratulate each other after the inauguration of the new parliament in Kabul, Afghanistan on Wednesday, Jan. 26, 2011. President Hamid Karzai swore in the country's new parliament Wednesday in a ceremony that marked the end of a drawn-out battle over whether the lawmakers would be able to start work despite ongoing investigations into electoral fraud.(AP Photo/Musadeq Sadeq)
Share this story

Female members of the new parliament congratulate each other after the inauguration of the new parliament in Kabul, Afghanistan on Wednesday, Jan. 26, 2011. President Hamid Karzai swore in the country's new parliament Wednesday in a ceremony that marked the end of a drawn-out battle over whether the lawmakers would be able to start work despite ongoing investigations into electoral fraud.(AP Photo/Musadeq Sadeq)

Mr. Karzai had tried to delay the convening of the new parliament until a special court finished investigating allegations of election fraud. The victorious candidates – as of today, sitting parliamentarians – had argued the court was unconstitutional and that they would convene with or without the president’s blessing. Key international players appeared to back the new parliament, prompting Karzai to complain about “foreign hands” stoking the crisis.

Since Karzai’s fraud-marred reelection, lawmakers have successfully challenged more of his major decisions, holding out the prospect of diverse power centers competing inside the constitutional process, rather than just on the battlefield. Yet the parliament remains weak, and this particular standoff with Karzai may not be over.

“There are so many issues not resolved: What will be the role of the special court, whether [its]decisions will be binding or not, and how to implement the decisions,” says Shahmahmood Miakhel, country director for the United States Institute of Peace in Kabul. “So we can not say this is the end of the story.”

Special deals with the special court?Statements from Karzai indicate that he thinks a deal was struck with parliamentarians to allow the special court to continue its investigation and to abide by its findings, expected in February. But legislative leaders appear to be saying something different.

“There is no special agreement between MPs and President Karzai on the special court,” says Fawzia Kofi, a reelected MP from Badakhshan. “The agreement was that cases of criminal issues related to elections should be dealt according to the law – the Constitution, and electoral law, and the regular courts – not the special court.”

However, MPs have a certain amount of immunity under the law. Ms. Kofi says the immunity does not extend to “obvious crimes” like murder and bribes, but simply protects free speech. Mr. Miakhel, however, notes that the courts have to seek permission from the leadership of parliament before pursuing criminal cases against MPs.

Kofi says she expects that the new parliament will vote quickly to abolish the special court. The court was appointed by the Supreme Court, a body widely seen as beholden to Karzai. Parliamentarians have also noted that the group tasked under law to address election violations – the Electoral Complaints Commission (ECC) – has already passed judgment on the 2,648 top priority complaints.

But roughly 200 losing candidates have kept up steady protests of the official election results certified by the Independent Election Commission (IEC) and have pinned their hopes on the special court.

Stronger opposition presence in parliamentResearch on the winning candidates conducted by the Kabul Center for Strategic Studies found that â€œas a result of strict control, monitoring, and observation of IEC and ECC, the government was not able to bring many pro-government candidates.â€

But the center’s director, Waliullah Rahmani, cautions that “it doesn’t mean that we will have a stronger opposition group inside the parliament. [The] study shows that these groups and figures are fragmented.”
The study found that 51 percent of the new parliamentarians are “independent,” a group that Karzai’s government might find easier to sway. The lack of strong political parties has left a high number of independents and little cohesion among lawmakers, rendering the parliament generally weak.

The largest ethnic group, Pashtuns, won 96 out of the 249 seats – a proportion slightly lower than some demographic estimates would predict if voting followed purely ethnic lines. The Hazara minority group punched far above its weight, winning 61 seats.

This was dramatically demonstrated in Ghazni Province, which is split demographically between Pashtuns and minority groups, but which sent all Hazaras and no Pashtuns to parliament this time. The most visible leader of the 200 losing candidates, Daoud Sultanzai, hails from Ghazni.

Parliament’s ethnic proportions have made some Afghans like Karzai nervous about further alienation of Pashtuns, the core group from which the insurgency draws its ranks. But others like Mr. Rahmani point out that those who peacefully participate in the democratic process should reap some benefits.

“This is what we can call a reward for democracy. I believe Pashtuns will understand that when there is high turnout, then they can get the reward, like what the Hazaras did in Afghanistan,” says Rahmani, who is a Hazara and whose brother won a seat in parliament from Ghazni Province.