You are at:Home»Refugees»Europe»Countrywide Hunger Strike In Greece 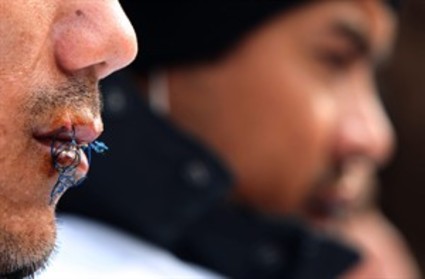 A hunger strike by 300 migrants across Greece begins today. It is the latest in a long line of hunger strikes by refugees denied asylum by a regime that currently only approves 0.6% of all applications it receives, that has been regularly criticised by the UN and the rest of the EU for the appalling conditions in its detention centres and its general abuse of foreigners and that now seeks to join the ever-growing list of states that think that building a wall to keep ‘them’ out is a reasonable solution to a ‘problem’ that steadfastly refuses to go away.

The European Court of Human Rights has also recently criticised Greece (along side Belgium) for its mistreatment of Afghan asylum seekers and 6 EU countries (UK, Sweden, Norway, Germany, Finland and Denmark) have suspended Dublin II returns of refugees to the country until Greece can guarantee asylum seekers’ their human rights and due process in asylum cases.

We are immigrants and refugees from across Greece. We came here persecuted by poverty, unemployment, wars, and dictatorships. Western multinational companies and their political servants in our countries, left us with no choice but to risk our lives ten times to get to the door of Europe. The West which robs us of our home places to achieve far better standards of living, is our only hope to live like humans. We entered Greece (normally or in other ways) where we work to feed ourselves and our children. We remain at the indignity and the darkness of lawlessness, for the benefit of employers and the State’s agencies by the wild exploitation of our work. We live by our sweat and with the dream to have equal rights with our Greek colleagues, at some point.

Lately, things have become very difficult for us. Wages and pensions are reduced; everything becomes more and more expensive; so the immigrants are presented as if they were the culprits, as they are to blame for the misery and wild exploitation of the Greek workers and minor entrepreneurs. The propaganda of fascist and racist parties and organizations has become the State’s official talk about the immigration issue. Their phraseology is being reproduced unaltered by the mass media when they refer to us. Their ‘proposals’ are enshrined as governmental policies: wall at Evros, navigable army camps and European military forces in the Aegean Sea, crackdowns and assault squads in cities, mass deportations. They try to convince the Greek working-class people that we suddenly constitute a threat against them, that we are to blame for the unprecedented attack they endure by their own governments.

The lies and brutality must be answered immediately; we immigrants and refugees will give this answer. We move forward with our lives now to stop the injustice against us. We demand the legalization of all immigrants, equal political and social rights and obligations like the Greek employees. We ask our Greek fellow workers, everyone who suffers from the exploitation of their efforts, to stand beside us; to support our struggle, so that lies and injustice, fascism and totalitarianism of political and economic elites do not prevail in their home place as well. All these have prevailed in our own countries, and forced us to migrate to be able to live with dignity, we and our children.

We have no other way to make our voice heard, our rights to be spread. Three hundred (300) of us begin nationwide hunger strike in Athens and Thessaloniki on 25 January 2011. We put ourselves at risk, because this is no decent life. We prefer to die here, rather than our children to live what we suffered.