You are at:Home»News»Who benefits from Taliban revisionism? 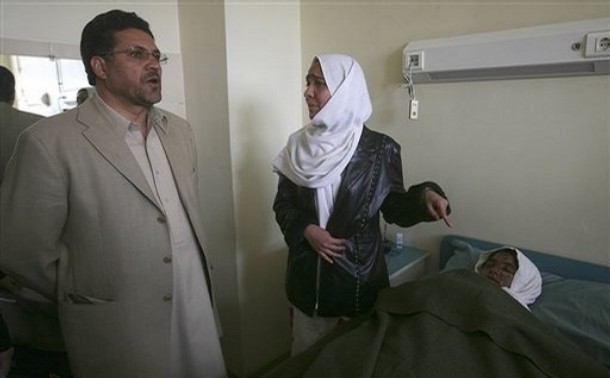 Shamsia Husainai, 17, rests on a hospital bed while Masuma, center, speaks with Afghan Education Minister Farooq Wardak in Kabul after an acid attack on her Wednesday in Kandahar, Afghanistan, Friday, Nov 14, 2008. Men squirted the acid from water bottles onto three groups of students and teachers walking to school Wednesday, principal Mehmood Qaderi said. Some of the girls have burns only on their school uniforms but others will have scars on their faces. AP PHOTO
News

Who benefits from Taliban revisionism?

By Hazara People on January 22, 2011 0 Comments
Shamsia Husainai, 17, rests on a hospital bed while Masuma, center, speaks with Afghan Education Minister Farooq Wardak in Kabul after an acid attack on her Wednesday in Kandahar, Afghanistan, Friday, Nov 14, 2008. Men squirted the acid from water bottles onto three groups of students and teachers walking to school Wednesday, principal Mehmood Qaderi said. Some of the girls have burns only on their school uniforms but others will have scars on their faces. AP PHOTO
Share this story

The Afghan government is trying to whitewash the Taliban’s image by claiming it no longer opposes education for girls. 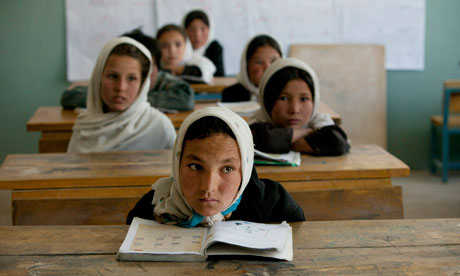 Afghan girls listen during class at the Markaz high school in Bamiyan, Afghanistan, in October last year. In the peaceful province of Bamiyan, girls are able to attend school without any fears. Photograph: Paula Bronstein/Getty Images

Farooq Wardak, the Afghan education minister and a key ally of President Hamid Karzai, claims that the Taliban leadership no longer opposes education for girls. The question is not whether this claim is true – teachers and students who continue to be terrorised by Taliban attacks would find it laughable – but why a senior Afghan official would engage in such misinformation.

The education ministry’s own statistics show that 20 schools were bombed or burned down between March and October 2010. At least 126 students and teachers were killed in the same period – an increase from the previous year. It’s hard to know how many of these attacks were carried out by the Taliban, but the evidence in many cases points in their direction.

Attacks are often preceded by a threatening “night letter” like this one, sent last year to a school in Kunduz, in the north:

“You were already informed by us to close the school and not mislead the pure and innocent girls under this non-Muslim government … This is the last warning to close the school immediately … If you remain in the province, remember that you along with your family will be eliminated. Just wait for your death.”

In another case, a female teacher received a letter that said:

“We Taliban warn you to stop working, otherwise we will take your life away. We will kill you in such a harsh way that no woman has so far been killed in that manner. This will be a good lesson for those women like you who are working.”

Another teacher quit after receiving a letter with a Taliban insignia in October 2009:

“We warn you to leave your job as a teacher as soon as possible, otherwise we will cut the heads off your children and we shall set fire to your daughter.”

When I showed some of these letters to Wardak last July, he passed his eyes over them briefly, then cast them aside, saying: “If we had time I could explain to you how I know that this is the handwriting of Pakistanis, not Afghans.” He went on to question whether Mullah Omar, the Taliban leader, really exists. This was a startling lesson in revisionism about the Taliban.

Today, just as when the Taliban were in power pre-9/11, some rural communities are able to negotiate with them to stop attacks on education. Afghan parents want their children educated, including their daughters, and fight for it, even when it puts them at risk. But the Taliban usually draws the line at educating girls over about age 10, when puberty and demands to segregate the sexes take precedence. And not all attacks are about gender. Many schools and teachers are attacked as visible agents of the government in small rural communities or as symbols of western influence and teaching.

When in power the Taliban claimed that girls were being denied education only because of scant resources, a claim that Mullah Abdul Salam Zaeef, the Taliban’s former ambassador to Pakistan, recently repeated. However, when I interviewed Mullah Zaeef about attacks on education several years ago, he dismissed Human Rights Watch’s findings of systematic attacks as a fabrication.

Wardak plays down Taliban attacks on women and girls because he has become a leading government proponent of the need for reconciliation with the Taliban. It suits his agenda to whitewash continuing Taliban crimes. And, like many Afghan politicians, he prefers the conspiracy claims – that the Taliban are an entirely Pakistani creation, rather than confronting the messy reality of a home-grown movement that is as much a product of Afghan reality as of Pakistan’s intelligence agency.

There is a risk that some politicians in the UK, US and elsewhere, nervous about mounting casualties and dwindling public support for the war in Afghanistan, will seize on such claims. Governments seeking an exit strategy may also find it convenient to play down Taliban abuses against women and girls.

While most women in Afghanistan desperately want peace, they don’t want a peace deal that is blind to the price they may pay. That requires realism about the nature of the insurgency. Although a comprehensive peace deal seems distant for now, small local deals are already taking place under the name of “reintegration” of Taliban fighters, with the promise of jobs and other enticements. But there is no vetting system to stop a commander who is notorious for attacking girls’ education from becoming a local security chief, or even a district governor, with all the obvious risks to women and girls.

Instead of trying to soften the image of a group synonymous with the oppression of women and girls, the education minister should focus on increasing opportunities for their schooling, and on protecting girls’ education from attack. Attacking schools is a war crime and should never be glossed over. Those who threaten, bomb and burn down schools should instead be held to account. Shamsia Husainai, 17, rests on a hospital bed while Masuma, center, speaks with Afghan Education Minister Farooq Wardak in Kabul after an acid attack on her Wednesday in Kandahar, Afghanistan, Friday, Nov 14, 2008. Men squirted the acid from water bottles onto three groups of students and teachers walking to school Wednesday, principal Mehmood Qaderi said. Some of the girls have burns only on their school uniforms but others will have scars on their faces. AP PHOTO