You are at:Home»Refugees»Curtin detainees ‘on hunger strike’ 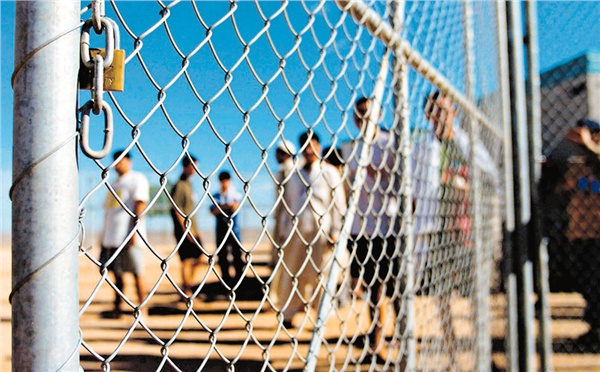 Hundreds of asylum seekers at the Curtin Detention Centre near Derby have gone on hunger strike this morning and are refusing to even drink water, according to a refugee advocate.

Advocate Pamela Curr said a detainee told her of the protest in a short telephone conversation earlier today.

“Some of the men have been on hunger strike for three weeks and some have been taken to hospital because they’ve collapsed … he said two people are in hospital that he knows of,” she said.

The Department of Immigration says between 20 and 30 asylum seekers are refusing food offered by the detention centre staff.

The hunger strike is part of a larger protest which started last night and at times involved up to 150 asylum seekers.

A spokeswoman for the Immigration Department said staff are negotiating with the protesters and are encouraging those refusing food to end their hunger strike.

She said the protest would not affect the outcome of the detainees’ asylum seeker claims. “People found to be owed Australian protection will receive it, and those found not to be refugees through our robust system will be returned home either voluntarily or through the mechanism of the new Memorandum of Understanding with Afghanistan,” she said.

Ms Curr said she had been told that the men, mostly young Afghani males, were frustrated at not being told anything by the Department about how their cases were proceeding.

He had also claimed that access to the internet had been blocked, she said.

Detainees’ moods had lifted in October after the Federal Government lifted its six-month processing ban for Afghani asylum seekers.

Ms Curr said many of the detainees had been interviewed in November but since then, about 150 people had been rejected as refugees.

Ms Curr said the man had been unaware of the memorandum of understanding signed between Australia, Afghanistan and the United Nations High Commissioner for Refugees, which would return failed asylum seekers to Kabul involuntarily.

About 50 Afghan asylum seekers who have failed the basic assessments would be the first to go, but that could be years away pending a judicial review of their cases by the High Court.

Representatives from the Immigration Department and the International Organisation for Migration started visiting detention centres yesterday to provide information to “irregular maritime arrivals” about their eligibility for the reintegration program, the department said in a statement.

The Department said detainees would be offered help to return and counselling services designed to reduce the chance of them trying to return to Australian.

In-kind and cash assistance to a maximum of US$4000 is available for people returning to Afghanistan and Iraq and US$3300 for other countries, with a maximum of US$550 cash.

According to the Department, the program is intended for people who ask for support to return voluntarily to their country of origin and who have not been notified they are to be formally removed.

However, Ms Curr accused the Federal Government of running a scare campaign to frighten already isolated detainees into signing to go back to their country of origin rather than use the court system.