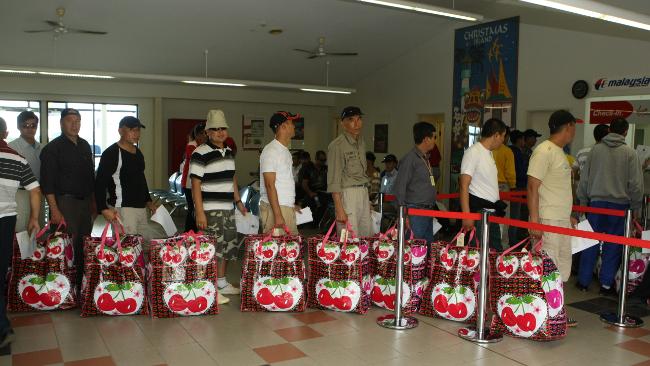 By Hazara People on January 17, 2011 2 Comments
Share this story

A new agreement between Australia and Afghanistan paves the way for the first forced return of Afghans who are deemed not to be refugees. And if that happens, they are likely to be from the persecuted Hazara minority because they form the majority of Afghan arrivals in Australia. Australia claims Afghanistan is now safer for Hazara people. But analysts say Australia’s refugee determination process is based on poor information and that is dramatically underplaying the dangers and potentially exposing forced returnees to unacceptable risks. MOTTRAM: Jamaher Amwary is Afghanistan’s minister for Refugees and Repatriation. A big job, since his country has more refugees than any other.

MOTTRAM: But at the signing in Sydney on Monday of the new memorandum of understanding between his country and Australia, Dr Amwary pledged that with Australia’s help, Afghanistan would work to stop the people smuggler traffic and boats destined for Australia that have so agitated Australia’s political debate.

For Australia, the immigration minister, Chris Bowen, signed the memorandum and stressed that Afghanistan’s agreement to accept forced returns would send a message to the people smugglers.

BOWEN: No longer will people smugglers be able to tell people that even if they are not regarded as a genuine refugee, there is no mechanism for the Australian government to return them to Afghanistan. That is no longer the case. This is a sustainable and robust approach, which treats people with dignity but makes it clear that the end result of not being regarded as a refugee […] is return to Afghanistan.

Lending its weight to the deal, the UN refugee agency, the UNHCR, also signed on.

Expert on refugees and on Afghanistan, Professor William Maley of the Australian National University, says the memorandum does have some important provisions.

MALEY: One is that it requires that cases be assessed not simply in terms of refugee convention obligation of protection but also against instruments such as the convention against torture as well as against compelling humanitarian need.

MOTTRAM: That means better prospects to have cases approved, especially for about 200 unaccompanied Afghan children who are currently in Australian detention. In addition, a recent court victory in Australia has required that all asylum seekers get access to judicial review.

But it’s less the new memorandum and more the Australian government’s processes for assessing refugee claims in the first place that concerns Professor Maley.

MALEY: That’s partly because the government has had to pull in all sorts of people with relatively minimum training in recent times to undertake assessments and one wonders whether the people who are doing these kinds of assessments really have a good smell and feel of what the situation on the ground in Afghanistan is like.

MOTTRAM: Not only are those officers ill equipped for their task – as rejection rates for Afghans grow – they are, Professor Maley says, labouring under a questionable Australian claim that security has improved in Afghanistan, especially for the persecuted minority Hazaras, who make up most of the Afghan refugee claimants in Australia.

And just last year Professor Maley says there was particularly gruesome evidence of that.

MALEY: Eleven Hazaras in June 2010 were decapitated in the province of Oruzgan, where Australian troops are deployed, and their bodies were left by the roadside and those who are making decisions in cases of this sort need to think very carefully about whether they would even possibly be exposing somebody to the risk of that kind of treatment.

MOTTRAM: Ethnic Hazara, Younus Noori, made the dangerous boat journey to Australia from Indonesia in 2000, fleeing the Taliban’s threats. Eventually granted asylum in Australia, he now works, studies and raises his family in Adelaide. He can barely describe how dangerous his journey was, but during a visit to Canberra said the dangers still facing Hazaras were so much greater that nothing would stop them taking the trip.

NOORI: This is the most difficult and the most horrible journey that you can ever feel coming to Australia by boat. But the problem is that when the people are inside like a kind of a burning house, whenever they see a hole, they hope that they can go through and get out of that and they will try to use that.

MOTTRAM: Australia claims no one will be returned to face persecution. And with 49 of the 2600 Afghans currently in Australian detention having had their cases rejected at two reviews, Chris Bowen, the minister, says forced returns could come within the year. But with the international community advocating a deal with the Taliban as part of a political settlement in Afghanistan, Hazaras fear they are facing the prospect of much more – not less – persecution.