You are at:Home»Refugees»To stop the refugee boats, start by setting up a visa queue in Quetta 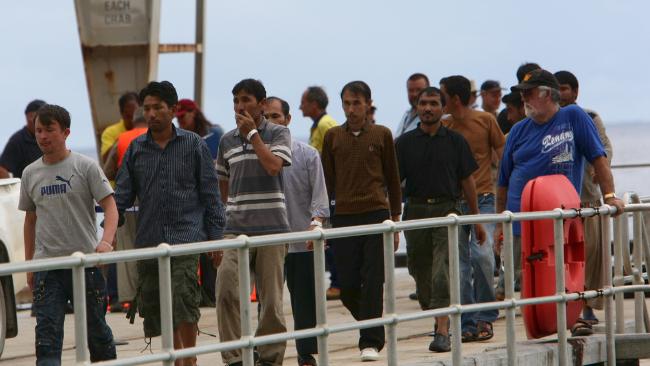 To stop the refugee boats, start by setting up a visa queue in Quetta

By Hazara People on January 9, 2011 0 Comments
Share this story TWENTY years ago, Gul Rasul lost his leg at the hip while clearing Afghan villages of landmines.

He helped refugees return from Pakistan, but his price was a living nightmare: hours of agony in the back of my ambulance and a lifetime disability.

This story is important because a man from a small, persecuted Shia minority found a way to rebuild his country. He rejoined logistics with a prosthetic limb and his younger brother replaced him in the field. At any time he could have rolled the dice with people-smugglers and taken a decent shot at Australia, but he is one of the deserving thousands who haven’t.

It is probably inevitable that people will flee regional instability across the Middle East and southern and Southeast Asia. But it is being aggravated by the 1951 Refugee Convention, which drives people into neighbouring states to apply for asylum, only to discover massive waiting lists and years of delay. It is eminently safer, faster and more efficient for the UN to process refugees when they first cross borders; it also restricts criminal trafficking mostly to non-refugees.

Two-thirds of Australia’s arrivals originate from Afghanistan and Iraq, nations with democratically elected governments that we helped establish. Half of these arrivals are escaping little more than poverty and pockets of instability.

Because the laws of refoulement don’t apply to these non-refugees, they should be immediately returned to UNHCR safe zones in their region for economic reintegration. That doesn’t occur because we have a federal government offering each of them the option to appeal Immigration’s determination to a review tribunal, and a recent High Court determination allowing them to appeal that appeal. Even then, we merely invite them to return home.

The Australian-funded AliceGhan residential complex in Kabul is an ideal resettlement base. It can accommodate 6000 people but is mostly empty. Only when non-refugees are respectfully returned home can they warn others of smuggling’s futility.

The further from source we determine asylum, the harder and more costly it is to perform. The most tragic option is what we do now: label it a complex problem, watch boats limp over the horizon, then process applicants onshore.

In office, Labor has made more than a dozen policy retreats and is reaping what it sowed, with more than 6000 people arriving annually. The first hint of progress was the government’s leak last month that Afghanistan might finally accept the return of failed asylum-seekers, which was a regular occurrence under John Howard. Coalition immigration spokesman Scott Morrison pointed this out, arguing the need to address the problem at its source. Supporting refugees in their countries of first asylum is more effective than dealing with those who ultimately make it to our shores. He is right to demand a fresh look at how we implement and interpret the Refugee Convention in the 21st century.

Displaced and persecuted families such as Gul Rasul’s may engage smugglers as the only alternative to long UNHCR resettlement waiting lists. Once in Pakistan, road blocks around Quetta prevent Afghan asylum-seekers from reaching Western authorities in Islamabad to lodge a direct application. It’s wrong that wealthy nations sign up to a refugee treaty, only to make success geographically improbable.

Expanding cross-border processing would mean thousands more applications, but a consistent bar for refugee status would mean the quick dismissal of frivolous applications. Our goal must remain identifying true persecution as expediently as possible.

Wealthy nations are more likely to accept UNHCR resettlement requests out of Pakistan than they are from Australian detention centres. That’s why it is in our interest to better resource border processing, then engage other target nations to shoulder the resettlement load, particularly those not pulling their weight in securing or reconstructing Afghanistan.

Malaysia’s visa exemptions for certain Muslim states is the segue for smuggling by air into Southeast Asia. Next, Indonesian boat crews operate as drug mules of the trade, with little to fear from our courts. Ten-year jail terms followed by non-voluntary extradition to the feared Kerobokan prison would end these journeys. But the federal government can’t even finalise an Indonesian prisoner-exchange agreement. Footing the incarceration costs of its complicit citizens is one way to induce Indonesia to stop boat trafficking before it starts.

Immigration loopholes at home add to the attraction of smuggling. The chance for family reunion visas lures extended families in Afghanistan to pool resources, smuggle individuals on to boats, then hope the remainder can follow. Until every person deserving asylum can get it, we should limit reunions to spouses and minors of the persecuted.

Australia is obliged to defend its sea borders, but surveillance and processing along our northern shore is expensive and the risks we impose on our service personnel often unnecessary. A fraction of the billions this government spends running detention centres for non-refugees would fund facilitated return for thousands of families into the new Afghanistan and Iraq.

Regional instability, and the people it displaces, is a fact of life; commercial people-smuggling shouldn’t be. Australia must strengthen cross-border processing in Pakistan, return non-refugees to their region for UNHCR appeals, provide real deterrence for Indonesian smuggling crews, and reform our family reunion program. Only with innovation at source rather than desperation along our north can we secure our maritime borders and help those who need it most.

Andrew Laming is a Coalition federal MP from Queensland, a former landmine clearing medic in northern Afghanistan, and a World Bank consultant.