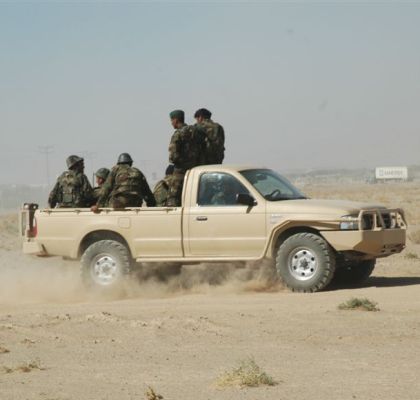 “The commander tells us, ‘search your pockets’. If somebody gives him money, he can take vacation. I don’t have any money so I can’t go,” said one soldier, a 20-year-old ethnic Hazara man.

MUSA QALA, Afghanistan: Disgruntled Afghan soldiers dish out five-dollar dinner plates of fried rice and potatoes to US Marines at a camp on the frontline against the Taliban in southern Afghanistan. This culinary sideline, which supplements the US forces’ spartan rations, helps the Afghans save enough cash to bribe their commander to give them time off to see their families, the men say. Some never return.

Speaking in secret afterwards, the Afghan troops told AFP that because they are ethnic minorities in the country’s Pashtun-heavy army, bribery is the only way they can make sure their Pashtun commander gives them a break.

“The commander tells us, ‘search your pockets’. If somebody gives him money, he can take vacation. I don’t have any money so I can’t go,” said one soldier, a 20-year-old ethnic Hazara man.

“As a non-Pashtun, I’m cheap. I’m not as valuable to them (the army) as a Pashtun soldier,” added a Tajik, who like others requested anonymity for fear of retribution.

The situation is sapping morale among young recruits at a small base in the Musa Qala district of volatile Helmand province, a highly dangerous area and one of Afghanistan’s main Taliban flashpoints.

A report from respected NGO International Crisis Group in May said today’s Afghan army was “incapable of fighting the insurgency on its own”, highlighting ethnic factionalism, illiteracy, drug addiction and desertion.

Its research found that Pashtuns and Tajiks — thought to make up 42 and 27 percent of all Afghans respectively — dominate the officer ranks, while Hazaras, Uzbeks and other groups remain under-represented at that level.

General Mohammad Zaher Azimi of the Ministry of Defence said that the Afghan National Army (ANA) was ethnically balanced and that it would not stand for any discrimination in the ranks.

“We are not aware of any mistreatment of soldiers from one ethnic group by officers from another ethnic group, or officers taking bribes to give soldiers leave,” he told AFP.

“But we will investigate these reports and if we find out they are true, we will take proper measures to solve them. We will not tolerate any kind of discrimination in the national army.”

Feelings of alienation do not help fire up the young recruits for their job, which many admit they find frightening and only stick with for the relatively decent wage of 280 US dollars per month.

Dangers lurk both on and off the battlefield — Taliban attacks on army targets in Afghanistan’s towns and cities are frequent, with nine troops killed in one day last month in Kabul and Kunduz.

“I’m scared, who cannot be scared of a Taliban attack? If the foreigners leave, we don’t have anything,” said the young Tajik soldier, who has another three years to serve before he can leave the army.

“Most of us are scared because we just come to get money. We’re scared to get in front of the bullet,” added the Hazara soldier.

“A lot of soldiers take vacation and never come back. Without the Marines’ help we cannot look after Musa Qala. And because of the national ethnic problems, I think the army will remain weak.”

US Marine commanders say they are pleased with the progress of the soldiers they are training through daily lessons and joint patrols.

When the troops leave their base, the Marines lead the way while Afghan soldiers conduct searches of people and compounds.

But when the international forces do battle with the Taliban, Afghan soldiers take a back seat.

On one patrol, an Uzbek soldier summed up the despair felt by many of his brothers in arms.

“Non-Pashtun people have no value here. What can I do?” he said. “How can our country be built if things go on like this?”