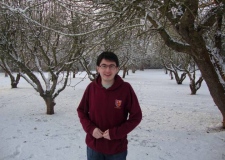 Mohammad Razai, 24, who is devestated after learning his mother and half-brother may be unable to attend his graduation.
Refugees

By Admin on January 2, 2011 0 Comments
Mohammad Razai, 24, who is devestated after learning his mother and half-brother may be unable to attend his graduation.
Share this story Mohammad Razai, 24, who is devestated after learning his mother and half-brother may be unable to attend his graduation.

was twice refused entry to the country to watch him graduate.
The case of Mohammad Razai, 24, has been taken to the minister, Damian Green, by Cambridge MP Julian Huppert.

Mr Razai, who is due to graduate this month (January), came to the UK aged just 15 as an asylum seeker, speaking no English, after several members of his family were detained, tortured and killed in his home country of Afghanistan.

He, his father and mother were imprisoned in 1987 when Afghanistan was under Soviet occupation. His father was later executed.

The family is part of the Hazara ethnic group.

In 2000, after one of his uncles was murdered in prison, he and his 14-year-old cousin, Ali, were smuggled out of the county dressed as women in order to protect them.

Mr Razai made his way to Cambridge University via a failing London comprehensive school, has completed his pre-clinical medicine degree at St Edmund’s College and hopes to graduate this month.

He has already delayed his graduation twice to allow his mother and half-brother to attend but the UK Border Agency has refused two of their applications for visitors’ visas.

Following the second refusal Mr Razai enlisted the help of Dr Huppert in the hope that with further intervention his family might be allowed to make the journey from their home in Kabul.

Mr Razai said: “I will be very disappointed if my mother cannot be at the graduation ceremony.

“I was supposed to graduate in June but it was postponed until October and now to January.

“My mother has made four day-long journeys to Islamabad to try to get these visas. She is exhausted and giving up.

“On both occasions the reason for refusal has been the same; that they are not genuine visitors.

“The broader issue is that, unfortunately, there is an assumption that claims from certain parts of the world such as Afghanistan are disingenuous.”

Dr Huppert said: “This case has serious implications for any British citizen in this country planning an event such as a wedding or even a funeral who wants family from overseas to be present.

“This is one of the biggest events in Mohammad’s life and it is only natural that he wants his family to be with him.

“The Border Agency is being unnecessarily harsh in this case. I hope it will grant these visas so that this family can be together.”

A spokesman from the UK Border Agency said: “Every visa application is carefully considered on its own merits against the immigration rules.

“The immigration rules for visitors are clear and it is important an applicant provides sufficient evidence of funds and sufficient ties to their home country to demonstrate they will return at the end of their proposed stay.”