You are at:Home»News»Are we committed to Afghanistan or to Hamid Karzai’s government? 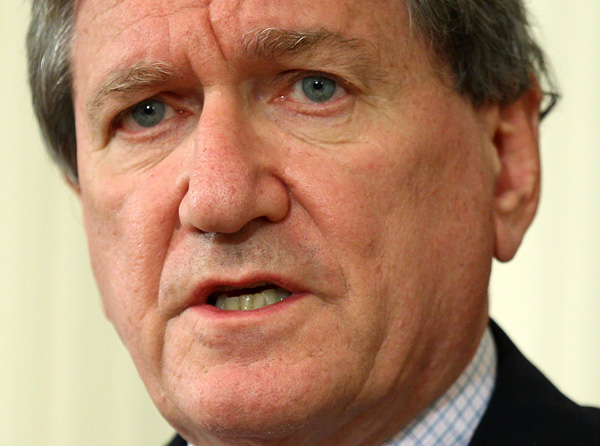 Are we committed to Afghanistan or to Hamid Karzai’s government?

By Admin on December 20, 2010 0 Comments
Richard Holbrooke
Share this story

The critical political question is now this one: Are we committed to Afghanistan or to the Karzai government? There are many, many Afghans who will fight the Taliban and al-Qaida whether we continue to do so or not: the Hazara and the Tajiks and a good number of the nation’s women and city-dwellers. Not to feel some sort of duty and solidarity here would be morally deaf. But in what sense are these allies represented by a regime that cannot any longer even claim to have won an election? Or, even worse, by a predatory regime that may have a mutually hand-washing covert agreement with the Taliban itself?

The Pak-Af Problem
Are we committed to Afghanistan or to Hamid Karzai’s government?
By Christopher Hitchens riends of his would enjoy disputing whether his heart or his ego was the larger, but it was sad to know, as Richard Holbrooke’s heart eventually burst, that he had strained a good deal of it in upholding a policy in which much of his best advice had been, or was being, ignored. He was frequently left off the Obama plane when sensitive talks with Pakistani officials were in prospect. He was publicly rebuked by the administration when he stated that almost every Pashtun family contained at least one Taliban sympathizer. His early warning about the stupidity of incinerating the Afghan poppy crop was often ignored. And his death coincided with the latest confused review of a policy—known as “Af-Pak”—whose very abbreviation contains the seeds of its own negation.
Print This ArticlePRINTDiscuss in the FrayDISCUSSEmail to a FriendE-MAILGet Slate RSS FeedsRSSShare This ArticleRECOMMEND…ReprintsREPRINTSSingle PageSINGLE PAGE
Facebook FacebookDigg DiggReddit RedditStumble UponStumbleUponCLOSE

The word Pakistan is already enough of a crude acronym. Cobbled together in the 1930s by an exiled Muslim propagandist named Choudhary Rahmat Ali, it represents Punjab, Afghania, Kashmir, and Indus-Sind, with the last three letters a hasty add-on to mean “land.” In the Urdu language, the resulting mouthful means that an Islamic republic made up of fragments is “The Land of the Pure.” The Baluchi and Bengali peoples, orphans and victims of partition and of the Punjabi military elite, are simply left out. But the Pakistani claims on Afghanistan and Kashmir are included within the confection. By using the A and the K again, as with “Af-Pak,” we echo Pakistan’s own claim that it needs its own semi-colony in Afghanistan the better to combat India in India. This is the problem to begin with, and the reason why so many of our forces are permanently endangered by having to fight an enemy—the Taliban—that was created by and is still subsidized by our “friends.”

There are policies that might permit victory and policies that merely guarantee defeat. At first sight, a “surge” that emphasizes the date of its own abandonment so well in advance belongs in the latter category. But there are those who say that Afghans are encouraged to resist the Taliban by the assurance that NATO will not remain on their soil indefinitely. Tenuous as that sounds, it could explain why important areas in and around Kandahar have gone so quiet lately. But so does the rival explanation that all the Taliban need do is wait, and rest, and get the local population to synchronize its own timing with the inevitable withdrawal.
The critical political question is now this one: Are we committed to Afghanistan or to the Karzai government? There are many, many Afghans who will fight the Taliban and al-Qaida whether we continue to do so or not: the Hazara and the Tajiks and a good number of the nation’s women and city-dwellers. Not to feel some sort of duty and solidarity here would be morally deaf. But in what sense are these allies represented by a regime that cannot any longer even claim to have won an election? Or, even worse, by a predatory regime that may have a mutually hand-washing covert agreement with the Taliban itself?

In the aftermath of Richard Holbrooke’s death, I sought the opinion of two experienced policymakers, on the condition that they would permit themselves to be quoted. The first was Sir Sherard Cowper-Coles, the former British envoy and special representative to the country, who has now discreetly furloughed himself in order to be able to speak more openly. The second was Peter Galbraith, who was unceremoniously removed from Kabul by Ban Ki-moon’s U.N. bureaucracy after exposing the misuse of U.N. funds to underwrite Karzai’s undisguised vote-stealing last year.

Hamid Karzai, Sir Sherard tells me, “is a great king, but a poor chief executive … neither the hero nor the zero depicted by U.S. politicians and press, but a genuine patriot struggling to balance and control internal and external forces far greater than those available to him. Many of his instincts—about the way in which international aid fuels corruption, about the pernicious influence of private security contractors, about the effect of civilian casualties on consent for the counterinsurgency, about Helmand being in a far worse state now than it was before Western forces went crashing naively in—are basically right.” He added cautiously that some of Karzai’s other opinions—such as “that the American Army could suppress the insurgency if it really wanted, but is keeping it going in order to provide an excuse for a foreign military presence” did not seem so soundly based.

In Galbraith’s opinion, “it is more accurate to think of the Pashtun parts of Afghanistan as a mafia state where the government, local power-brokers, and Taliban both collaborate and fight. The power-brokers (in government or controlling the government) often work with the Taliban to enrich themselves and to share control of key areas. … The U.S. system of local contracting, the U.S. desire to make the government look effective by having it run development projects, and the obliviousness of the military and many diplomats (who are on short tours and often locked down) make it easy for both sides to rip us off.”

These expert assessments express a narrow but deep difference. How to adjudicate between them? On Dec. 13, the Washington Post’s Rajiv Chandrasekaran provided a hair-raising account of a meeting involving Karzai, Gen. David Petraeus, and Ambassador Karl Eikenberry. The American side was warning the president that a precipitate cancellation of contracts with overseas private-security firms would leave many crucial targets unguarded. Karzai’s response, before storming out of the room, was to shout that he now had three main enemies: the Taliban, the United States, and the international community, and that, “If I had to choose sides today, I’d join the Taliban.” This is not the only time he has made this hysterical threat, which may be a psychologically revealing one. He also made it in a meeting with Afghan lawmakers in April of this year.

Chandrasekaran’s report went on to note drily that, in many known cases, allies or relatives of Karzai would be the beneficiaries of such contracts being reassigned to local bidders. Thus it is for him, a “win-win strategy,” allowing him to pose as a defender of Afghan autonomy while enriching his own warlord clientele. Needless to say, this is a severe lose-lose outcome for the NATO alliance, as well as an arming and reinforcement of what might become a future Taliban coalition-partner.

The Cowper-Coles analysis, while not uncritical, allows us to preserve the idea that there are still two sides in Afghanistan, where we are attempting rather clumsily to shore up the lesser evil or perhaps the weaker yet better one. The Galbraith diagnosis is that the two supposed sides are in fact symbiotic and self-conscious partners under the skin. The first conclusion could argue that the present course is highly quixotic yet still defensible. The second conclusion is almost too horrible to think about, which is why it must be confronted very honestly and very soon.