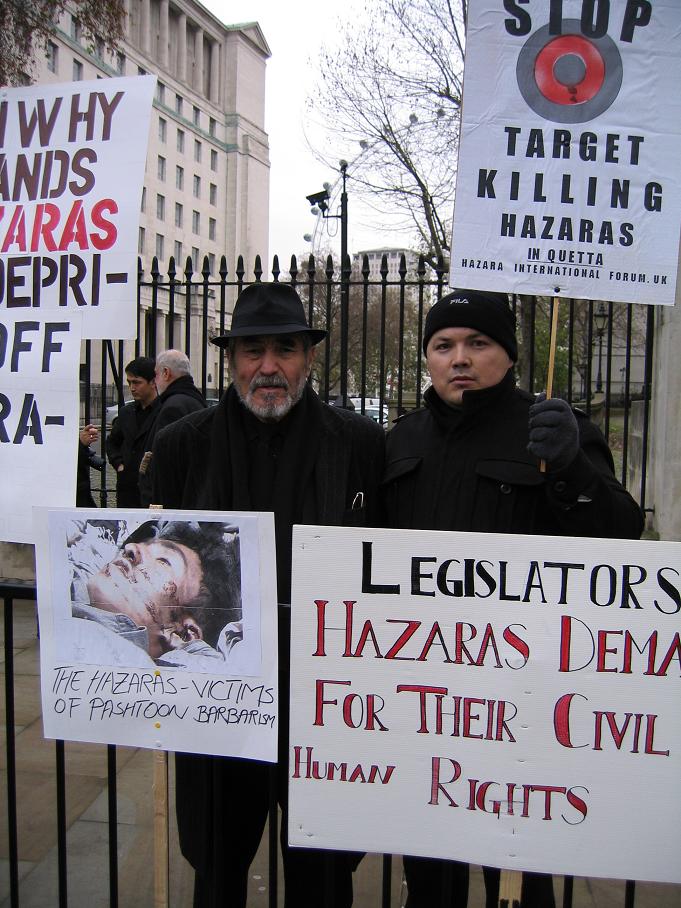 London: As per the previously circulated press release, Hazara International Forum of Great Britain held a Static Demonstration in front of the 10 Downing Street, London between 12:00 noon to 14:00 hours on 10-12-2010 to highlight the racial, ethnic and religious persecution of the Hazaras living in Quetta and Karachi Pakistan and Central Afghanistan. Despite harsh and frigid weather – people came to participate in the demonstration from across the UK such as Manchester, Milton Keynes, Birmingham, Coventry and Southampton to show their solidarity and commitment to the suppressed people of Hazara – suffering the brutalities of mass and target killings and abductions in Quetta and Karachi, Pakistan. The cruelties and atrocities of the Pashtun Kochis (Nomads), who perpetrate mass human rights violations with covert support of Hamid Karzai government; were also highlighted through banners and placards. The deportation of Hazara asylum-seekers from various European countries, viz., the UK, France, Germany, Norway, Sweden, Denmark, Greece and Australia were underscored to attract the attention of Human Rights organisations. Iranian influence and its proxy wars in Quetta, Karachi and Afghanistan, affecting the lives of the Hazaras, were also magnified via placards.

Ms. Jean Lambert – Member of European Parliament – also participated in the demonstration to show her support to the people of Hazara. The General Secretary HIF, Liaquat Ali Hazara, also drew her attention towards letters of the Forum for arrangement of series-wise meetings with her and other members of European Union Parliament who assured him that she will look at that and reply to it in due course. MNA, Syed Nasir Shah, also came to support the cause and appreciated the efforts of HIF for raising concern on prevailing predicaments of the Hazaras.

The excerpt of some placards and banners read as “Pashtun Kochis (Nomads) + The Taliban = Hamid Karzai”, “Marginalisation of Hazaras in Afghanistan Not Acceptable”, “Use Your Rights to Protect the Rights of Hazara Asylum-seekers”, “Stop Deportation of Hazaras From Australia”, Stop Target-killings of Hazaras In Karachi, Pakistan”, “No to Iranian Influence on Hazaras of Pakistan”, “Hazaras Youths, Stand Up For Your Rights!”, “Karzai, Why Thousands of Hazaras Were Deprived of Their Suffrage”, “Hazara Refugees Should Not Be Deported”, “No to Iranian proxy wars in Pakistan and Afghanistan”, “Down to The Taliban, Down to Its Affiliated Groups”, “Mullahism + Sectarianism = Iranian Sponsorship”, “Down to Governor, Down to Chief Minister, Balochistan” and “Stop Target-killings of Hazaras in Quetta”.

Agha Marzooq Ali, the Chairman HIF, in a video message to the Hazara nation requested the International Community to use its resources and influence to stop target killings of the Hazaras especially in Quetta, Pakistan.

In a separate interview to the Voice of America, he urged the Hazaras to beware of the belittling anti-Hazara policies of Iran who is trying to fan extremism and sectarianism in South Asia for political gains.

The Secretary General HIF also conveyed his message to the people of Hazara via video message that the Hazaras are suffering the centuries-long persecution of the Pashtun rulers of Afghanistan, who, now, face the grudge of religious extremists in Quetta and Karachi. He strongly negated the point of Syed Nasir Shah that other Shia organisations were not invited to participate in the demonstration and said that it was on the record of HIF that other Shia organisations, working in the UK, were invited for participation who have not shown up at the event.

The Jang Group of Newspapers gave sufficient coverage to the event and published the news of the Demonstration on the front page. The General Secretary HIF, L.A.H, was also interviewed by the Voice of America in Urdu which has also been included into the Pashtu bulletin. The reporter of VOA arrived at the demonstration in the last minute it had already finished who could not witness the real strength of the protestors. The audio link provides a complete one hour bulletin; however, the listeners may listen to the interview of LAH at 03:00 minutes. 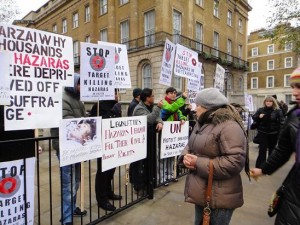 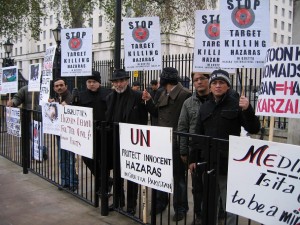 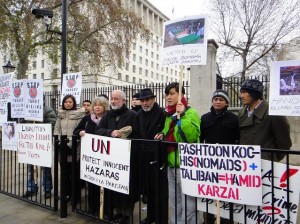 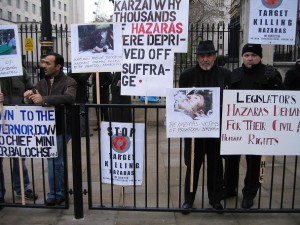 At the end of the demonstration, a memorandum, comprising of the above cited matters and issues was handed over at the gate of 10 Downing Street for its onward transmission to the British Prime Minister.