You are at:Home»Refugees»Gillard faces new test after tragedy 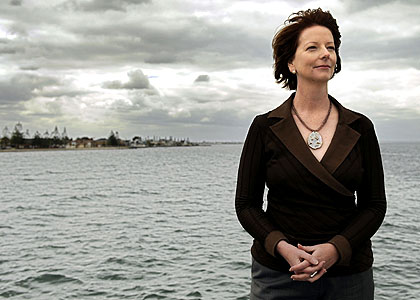 CANBERRA: The tragic sinking of a crowded refugee boat, which left 30 dead after it crashed into rocks on Australia’s remote Christmas Island on Wednesday, has renewed political pressure on Prime Minister Julia Gillard to change her refugee policy.

Gillard yesterday said 42 people survived the accident and 30 bodies had been found, but the final death toll from the accident may never be known.

It has put the spotlight on the government’s refugee policy and has the potential to unsettle Gillard’s minority government, which rules with support from three independent and one Green legislators.

The actual death toll may never be known because the total number of passengers was uncertain and bodies may have been lost to the sea.

The known toll increased to 30 after two more bodies were plucked from the rough waters off Christmas Island where the wooden vessel packed with asylum seekers broke apart.

As many as 100 people were believed to be aboard the boat when tragedy struck.

Forty-two people were rescued. The bodies recovered included a man and a boy aged about 11 found by divers on Thursday near the submerged wreck. Other bodies may have drifted out into the Indian Ocean or been sent to the depths.

The passengers of Iraqi, Iranian and Kurdish origin were taking a perilous journey hundreds of refugees try every year. Most leave poor, war-ravaged countries such as Afghanistan and stop in Indonesia, where they crowd onto barely seaworthy boats with few provisions to try to reach Australia.

The tragedy shocked Australia, where an often divisive debate has raged about how a rising number of asylum seekers reaching the country by boat should be handled.

One side argues the boat people are illegal immigrants who should be turned back, while the other says they deserve greater compassion.