You are at:Home»Refugees»Years of waiting and misery ended here 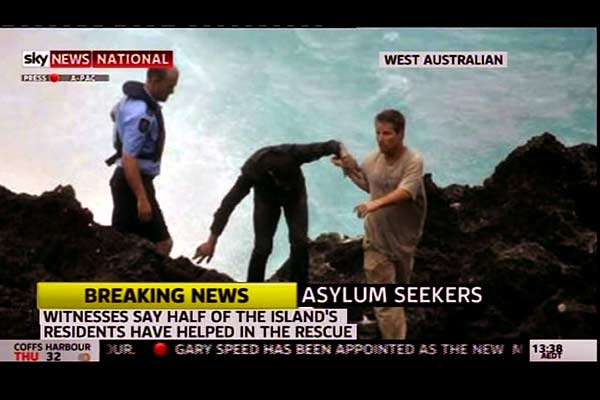 AUSTRALIA’S promise this year to resettle 500 refugees stuck in Indonesia will fall woefully short. Asylum seekers say the backlog of applications is encouraging people to make the perilous journey by boat instead. The deal between the Australian and Indonesian governments represented a tenfold increase over the previous year’s intake and was intended to take the burden off Indonesia and give asylum seekers an alternative to the sea crossing.

With two weeks until the end of year deadline, well-placed sources say, fewer than 100 refugees have come to Australia under the program and only about 50 more have been cleared to leave.

”There have been lots of refugees who have been told by the [office of the United Nations High Commissioner for Refugees]they can go to Australia and have been to the Australian embassy for interviews,” said ”Ali”, an ethnic Hazara from Afghanistan who has been in Indonesia for two years and has gone through the interviews.

”We are all refugees but we are still stuck here … I know some people who have taken the boats.”

The vessel that sank at Christmas Island yesterday is believed to have left from Indonesia. A source at Indonesia’s National Search and Rescue Agency said Australian authorities had not alerted it about the departure from Indonesia of the vessel.

Australia, with its superior radar, satellites and intelligence, frequently shares information with Indonesia about suspected people-smuggling boats in its waters.

But the source, who spoke on condition of anonymity, said such an alert had only been issued once in the past week, for a smaller vessel that departed Padang in Sumatra on Tuesday.

The vessel that sank was believed to be carrying Iranians and Iraqis, although it is not known whether any were refugees who attempted to get one of the 500 places to come to Australia.

However, asylum seekers said that people smugglers were making ”publicity” about the backlog, using it to entice asylum seekers to take boats. Ali said he was first interviewed in July by Australian officials in Jakarta but hasn’t been told how his application has progressed.

”They said they have to wait for a decision from Canberra.”

According to one source, the reason for the delay is the slowness of ASIO’s security checks.

There are 2700 registered asylum seekers in Indonesia, mostly from Afghanistan, Iraq, Iran and Sri Lanka. Hundreds more pass through each month without bothering to register as they await a vessel to Australia.

Some 800 of those who stay in Indonesia are recognised refugees. The UNHCR has assessed them as being legitimately in fear of persecution if they return to their homelands.

It is understood the names of 534 were forwarded to Australian authorities more than six months ago.

According to Ali, life for asylum seekers is miserable in Indonesia. If they are not in immigration detention, they must survive on a monthly allowance of about $100.

A spokesman for the Department of Immigration would not respond directly to questions posed by the Herald. ”Processing and resettlement is ongoing. The time taken for each case to be finalised is dependent on individual circumstances,” he said.