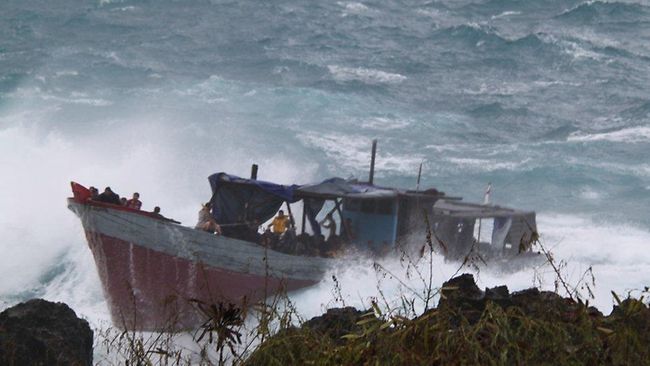 A photograph taken by local witnesses of the asylum-seeker boat being dashed on cliffs at Christmas Island. Source: The Australian
Refugees

By Hazara People on December 15, 2010 4 Comments
A photograph taken by local witnesses of the asylum-seeker boat being dashed on cliffs at Christmas Island. Source: The Australian
Share this story

THE death toll from the asylum-seeker boat crash at Christmas Island is believed to be 50, with 33 others injured, the Royal Flying Doctor Service said. A photograph taken by local witnesses of the asylum-seeker boat being dashed on cliffs at Christmas Island. Source: The Australian

Australian Customs has said that it has recovered 27 bodies from the water.

“We understand, and it’s not confirmed, that there are about 50 dead, and about 33 walking wounded,” said Flying Doctors’ spokeswoman Lesleigh Green, adding that they expected to pick up another three critically ill passengers.

Witnesses on Christmas Island told of a “major tragedy” after the asylum-seeker boat crashed into cliffs this morning.

Acting Prime Minister Wayne Swan confirmed “a number of people” had died and that a Navy and a Customs vessel were working in the rescue.

Julia Gillard announced late this afternoon she was cutting short her leave and returning to work as Prime Minister this evening.

Two Royal Flying Doctor aircraft were preparing to leave Jandakot airport in Perth as the ongoing rescue continued to stretch emergency services on the island.

There were two doctors and two nurses aboard but there were concerns that due to the poor weather, the planes may have difficulty landing.

Survivors of the tragedy are believed to be Iranian and Iraqi Kurds, said Pamela Curr of the Melbourne-based Asylum Seeker Resource Centre.

“My contacts on the (Christmas) island say they don’t think they are Afghan while most of the Iraqis and Iranians arriving by boat at the moment are Kurdish – they’re the ones coming out (to Australia),” Ms Curr told The Australian.

Eyewitnesses said about 70 asylum-seekers were onboard the 16-metre wooden boat battling heavy seas, when it smashed to pieces on rocks shortly after 7am (local time) off Flying Fish Cove.

Witnesses said people were being washed up on the jagged cliffs near the island’s old hospital and police station.

Local electrician Michael Foster described the surging water at the bottom of the cliffs as being like the inside of a washing machine.

He speculated the boat may have lost power as it approached Flying Fish Cove, at the northern end of the island, in the pre-dawn light – with rough seas then smashing the vessel against the jagged cliff face.

“I would suggest I saw about 30 [people]who didn’t make it,” he said. “The mood on the island is a bit disarrayed – there are people who have never seen a body before.”

Witness Phillip Stewart told Sky News that he saw the boat being dashed by waves and that while some people survived he believed up to 50 people had died.

Locals have told The Australian that the boat came into local waters some time this morning without being detected by authorities.

Dramatic pictures show the vessel, with women and children on board, being picked up by the waves and smashed into cliffs near Flying Fish Cove earlier today.

Navy inflatables were used to pick up some survivors from the heavy seas after the vessel broke up.

The Australian Federal Police have released a statement on the boat crash, revealing that they are responding to a “maritime incident involving a suspected illegal entry vessel on Christmas Island”.

One local resident who lives nearby, but who did not want to be named, said she heard screams at 6am and went down to the cliffs where she saw people hanging on to the boat as it was being pushed towards the cliff in huge seas.

“It almost tipped,” the woman said. “One woman was holding a small child.” The boat broke up soon after that, she said.

Phone calls went out around the island and hundreds of people went to the cliffs, throwing life jackets, ropes and anything else that floated out to the asylum-seekers.

“They were being washed into the cliffs, the really sharp cliffs,” Ms Stephenson said.

Local resident Allison Millcock said she arrived at the cliffs at 8am, by which time she could only see wood chips floating in the water. “I’ve been told the refugees got into trouble around 6am . At around 8am there were only woodchips in water. I’m told about 20 were rescued. It’s only rough number.”

A contractor with the council, manning a roadblock, said only federal police, hospital staff other emergency personnel and staff from security contractor Serco were being allowed down to the scene.

He said the navy was trying to bring survivors 6km around the other side of the island to calmer waters at Lilly Beach.

Ms Curr told The Australian Online she had received a text message from someone on the island saying that at least 30 people had been saved.

She said she was informed that people had been in the water since early this morning in 3m swell.

“What happened that they allowed this boat to come in the rough seas?” she asked. “We need answers.”

It was likely the unamed boat had been tracked since leaving Indonesia, Ms Curr said.

“Boats don’t just pop us and my concern is this – was there no one available to warn this boat not to land because the Australian Navy was there waiting for the seas to go down,” she said.

Speaking by phone, one Christmas Island resident said Navy and Customs, which had two vessels in the vicinity, were aware of the arrival of the refugee boat and a second asylum seeker vessel.

“I walked out onto my deck – because I’ve got beautiful ocean views – and I could see this refugee boat upside down – just bobbing up and down in critical seas out there and then I called the police because I couldn’t see any (rescue) boats around – I couldn’t see any patrols (boats),” the woman said asking not to be named.

Mr Stewart told Sky that waves of 4-5 metres were washing over the steep limestone cliffs today. It is the height of storm season for the area off Australia’s northwest coast.

“They were in a surge zone,” he said, “one of the most dangerous places to be.”

He said many people were being struck by flotsam and jetsam.

Christmas Island shire president Gordon Thomson told The West Australian he understood it was a “very bad situation” but he was unclear of the details.

The AFP has stressed that its response is ongoing and its priority is to ensure the safety of “all involved” in the incident.

“The AFP and partner government agencies on Christmas Island are coordinating the immediate response to this incident”.

It will release a more detailed statement shortly.

A spokesman for Customs and Border Protection issued a brief statement a short time ago.

“There is an ongoing situation which involves a rescue of people off Christmas Island. Our paramount priority is the safety of all involved. A further statement will be provided later in the day,” he said.