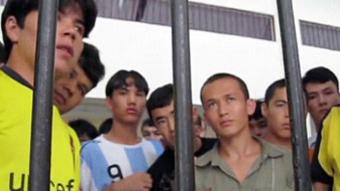 Afghan detainees to be sent home

By Hazara People on December 13, 2010 0 Comments
Share this story

Paul Maley and Lanai Vasek From: The Australian December 14, 2010

AUSTRALIA and Afghanistan have finalised an agreement that will pave the way for hundreds of failed asylum-seekers to be returned to Kabul. In a coup for the Gillard government, Canberra and Kabul have agreed on a draft memorandum of understanding, which is likely to be signed within weeks, The Australian has been told .

News of the agreement came as ASIO figures revealed the strain the constant flow of asylum-seeker boats is having on authorities. In answers to a Senate committee yesterday, ASIO said 330 asylum-seekers remained in detention while they waited for the agency to conduct security assessments.

The figures also reveal a blow-out in the number of security assessments ASIO is being asked to conduct. In the 10 months to October, 2460 boatpeople received checks, compared with 1093 for the whole of last year. The rise is consistent with the spike in unauthorised arrivals, which have hit 6224 this year, more than double the 2867 who arrived the year before.

The government has long maintained that deporting failed asylum-seekers was a key part of its strategy to stop the boats, which have been coming in ever-greater numbers since late 2008.

Afghans comprise the largest nationality of boat arrivals. Most are ethnic Hazaras, who have been subjected to persecution throughout central Asia.

According to the Immigration Department, 4342 Afghans have arrived since the flow started in late 2008, about half the overall total of 9252.

Although Afghans are overrepresented in asylum figures, only two out of the 181 unauthorised arrivals who have been returned to their home countries in that time were Afghans. Both returned voluntarily.

Several sources familiar with the negotiations said the agreement would involve Afghanistan, Australia and the UNHCR.

One source said the agreement could be signed as early as next week, although another source contacted by The Australian played down that possibility. It is understood the major barrier is getting all the participants “in the same room together” to sign the document.

News of the agreement drew a critical response from Khalid Koser, a Geneva-based expert on people-smuggling and non-resident fellow at the Lowy Institute.

Dr Koser said return programs were hugely expensive, added to the pool of internally displaced people inside Afghanistan and offered no clear deterrent to would-be asylum-seekers – a key selling point of the plan.

“If you look at (people-smuggling) as a cost per head, it’s always a massive figure,” Dr Koser said, adding it was impossible for authorities in Afghanistan to effectively monitor returned asylum-seekers, all of whom would “certainly” be returned to Kabul.

“It can’t be returned to the regions,” Dr Koser said of the agreement. “What you’re risking is returning people and making them internally-displaced people.”

In a paper on people-smuggling written for the Lowy Institute, Dr Koser said the costs borne by the taxpayer were among the highest in the world. “It is very unlikely that any other country in the world currently spends as much on asylum-seekers in terms of the ratio of costs to individuals involved as Australia,” he said.

Last night, Curtin immigration detention centre was running at almost double its original recommended capacity, while the Christmas Island, Leonora and Scherger facilities were also operating above their limits. A total of 1016 asylum-seekers were being held at the Curtin facility, in the remote West Kimberley region of Western Australia – despite an initial limit of 600.

A redevelopment of Curtin, which will allow for an extra 600 places, is not due to be completed until April; however, it is understood 150 beds are currently being used.

On Christmas Island last night 2726 people were being housed at a facility originally designed to hold just 400.

Nearly 400 of those people were in tents, despite warnings from the Immigration Department that tents were flammable and exacerbated tensions inside the overcrowded centre.

The Leonora detention centre, in outback Western Australia, was housing 207 asylum-seekers despite having a recommended capacity of only 200. The Scherger base near Weipa in northern Queensland – which opened in September – was six people over its 300-person limit.

The updated figures came as Immigration Minister Chris Bowen yesterday attended a meeting in Geneva, with the UN High Commissioner for Refugees, Antonio Guterres, as well as the Director-General of the International Organisation for Migration, William Swing, about the plan for a regional processing centre.

Opposition immigration spokesman Scott Morrison said the problem of overcrowded centres would not be solved until the government amended its domestic border protection policy.

“The simple fact is under this government we will see more beds and more boats,” Mr Morrison said.

“This government is just bankrupt on policy that works.”