You are at:Home»Human Rights»An open letter from the Hazara people around the world to international human rights organizations, international authorities and well-known personalities 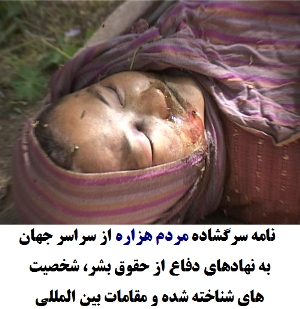 An open letter from the Hazara people around the world to international human rights organizations, international authorities and well-known personalities
Human Rights

By Admin on December 10, 2010 3 Comments
An open letter from the Hazara people around the world to international human rights organizations, international authorities and well-known personalities
Share this story History is a witness to crimes against humanity such as the persecution and discrimination against beliefs, race and linguistics that have led to various forms of human suffering.

Mass killings, ethnic cleansing, slavery, forced migration and discrimination are the most important forms of these crimes that have been committed by governments or their counterparts.
The most important preventative factors against present and future human rights crimes are investigation and identification of past crimes.

After the passage of time, human rights crimes have been investigated and governments, human rights organizations and progressive people have performed the necessary actions and reparations.

Whenever we turn over the page of crimes against humanity, it can be seen that the experience and painful memories of these crimes have been reduced or removed from a human being’s life by compensation with an apology, rehabilitation, return of properties or at the very least, condemnation of these human rights crimes.

The apology of the German government for the actions of the Nazis, the trial of the Serbian and Croatian Republics presidents at The Hague International Court and the later apology from Muslims and Serbs are good examples.

Surprisingly the crimes against humanity by the government of Afghanistan that have been investigated and identified are faced with the silence of the international community and international mass media. Therefore, these crimes are continuing.

The Hazara people have been persecuted for more than a century and crimes against humanity, genocide and forced migration have been committed against them. Since the activation of international human rights organizations in Afghanistan, some of these crimes have been documented, such as ongoing massacres of Hazara people in the Afshar area during the Mujahedeen rule in Kabul and the mass killings of Hazaras in Mazar-e Sharif, Bamyian and Yakawlang during the Taliban government.

Sending armed Kuchi-nomads to the regions where Hazara people live has been one of the methods used by the governments of Afghanistan over the past years for placing Hazara people under more pressure and it is currently being used again by the Karzai regime.

There are some groups inside the Karzai government that are fully involved in forced migration, murder and crimes against humanity by sending Taliban under the name of Kochi nomads to Dymyrdad, Behsood, Ghazni and Daikundi over the past months.

Currently these crimes are also being committed in Kabul, the capital city of Afghanistan, and the government is inciting people to commit violence against each other.

The direct involvement of members of the government of Afghanistan is shown by the settlement of Kochi nomads into the Hazara regions. In addition, the unilateral stance of the governmental media and their propaganda shows that the Afghan Government is behind all of these organized crimes.

As signatories of this letter, we request from the international community, institutions and especially human rights organisations, condemnation of these historic crimes and also those crimes against the Hazara people which are still taking place under the Karzai regime. We urge you to demand the Afghan government to implement and perform human rights norms, which are acceptable to the international community. In cases of violation of human rights laws by the Afghan government, based on its membership of The Hague International Court, the Court should be asked to take suitable actions towards stopping these crimes in Afghanistan. As signatories of this letter for solving the present problems with Kochi/Talibanism, we recommend the following:

1. The United Nations should introduce its special representatives to help solve the problem. The Afghan government lacks the capacity and tendency to solve this problem. It has become a great humanitarian disaster which needs the intervention of international institutions. We ask international organizations such as Human Rights Watch, Amnesty International and the UN Human Council to follow the issue and take proper action.

2. The documents that show the Kochi ownership of Hazara farm lands were issued to them by the dictators who were directly involved in the genocide and forced migration of the Hazara people. In fact, all these ownership documents show the active participation of Kochi Pashtuns in the crimes and should be unconditionally declared invalid.

3. Unconditional disarmament must be undertaken by Kochi and they should join the process of disarmament like other people in Afghanistan. The US and NATO have more than 150000 troops in Afghanistan and must take necessary actions regarding the disarmament of the Kochi-Pashtuns.

4. Reports and documents indicate that in recent years armed Kochi have been involved in killing, displacement and the destruction of houses and schools by fire and looting properties of Hazara people. The Afghan government and those people who are involved in all these crimes should return all the rights lost by Hazara victims and give them suitable compensation.

5. Criminals who are directly and indirectly involved in the killing and looting of Hazara property should be identified and prosecuted.

6. The transit of the Kochi is often used for transporting narcotics, weapons, explosives and precious jewels and must be under the control of international institutions.

7. The re-settlement of the Kochi Pashtuns should not happen on the farmlands of original inhabitants or their occupied properties. Kochi settlement must take place on the arid lands through irrigation of the lands such as Delaram, Bakwah and Nimruz.

8. Unfair rights in elective and appointive parliament seats which have been given to the Kochi must be taken from them and they should have equal rights with others, not less and not more.

9. Real Kochi and Talib terrorists should be identified.