You are at:Home»Refugees»Australia»Voting’s a privilege for Abdul 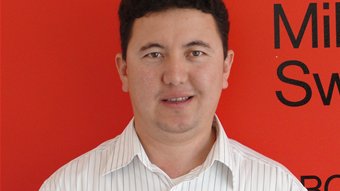 Voting’s a privilege for Abdul

By Jenni Henderson and Louise Ray

For Abdul Rezaei the state election will be the second time he has voted in his life. The first time was in the federal election in August.
This election means more to Mr Rezaei than it does for most people because until recently elections were not part of the political landscape in his home country of Afghanistan.

He is planning to cast an early vote for the state election because he’ll be away on polling day.

Mr Rezaei came to Australia from Afghanistan in 2001 and was held on Christmas Island after arriving by boat.

He was then housed at a detention centre in Western Australia until he received his three-year protection visa.

In June 2005 he received permanent residency and three years later he became an Australian citizen.

“Ten years ago, when I left Afghanistan, it was under the control of the Taliban regime… and it was not good when I left my country, ” Mr Rezaei says.

Mr Rezaei is part of a ethnic group called Hazara. He is also Shiite Muslim, and both these traits left him vulnerable to persecution.

“We were young and we had a different religion to the Taliban because they are Sunni. The Taliban needed young people for fighting, that’s why we were scared and I spoke with my father and I said it’s better to leave the country,” he explains.

Mr Rezaei has now lived in the Mildura community for four years.

His wife and three children arrived in 2007 to join him.

“We like Mildura and we like the place, its quite pleasant and also very nice people,” he says.

His wife won’t be voting in this state election because she isn’t yet an Australian citizen.

“She needs to pass the citizenship test,” he laughs, adding that she’s studying for it now.