You are at:Home»News»Ghazni’s Re-Election and the high-handedness of the IEC and Hamid Karzai 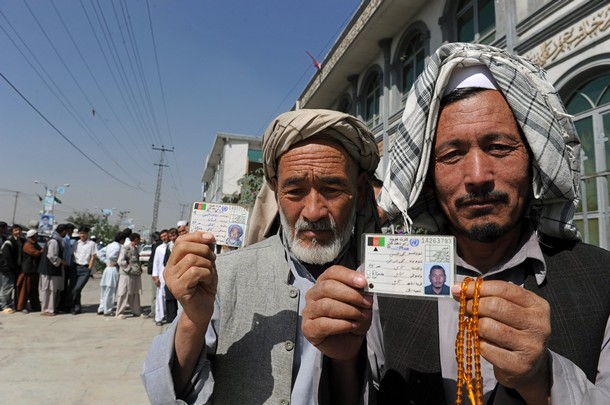 The much awaited result of the recent parliamentary elections has been announced by the Independent Election Commission amid fears of deteriorating law and order and clashes between the Hazaras and the Pashtun. The parliamentary election was held on 18th September, 2010 which churned out mass protests and demonstrations in Hazara inhabited regions as their actual adult population was underestimated to repeat the centuries-long injustice and high-handedness of one particular faction. Analysts and vigilant news reporters have witnessed various cases of rigging, fraud and political manoeuvrings as the stage had already been prepared to prolong the dominance of the Pashtun. 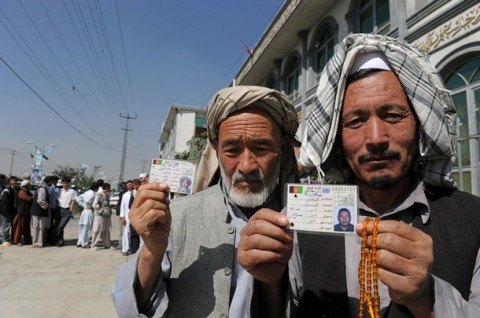 Hazara men pose with identification cards as they line up to cast their votes outside a polling station in Kabul on September 18, 2010. Getty Images

The recent announcement of the result of 33 provinces by the IEC is not surprising for international community and the oppressed ethnicities of Afghanistan, as the elections’ fall-out was architectured, preponderantly, to benefit the Pashtun. The post election scenario witnessed that the brokers, pressure groups and Pashtun lobbyists were making hectic efforts round the clock to create confusion among people, resultantly; the result of Ghazni province is with-held to favour one particular ethnicity. The ground is being prepared to hold re-election in this Province to restrict the successful Hazara candidates going into the parliament which has also been articulated by Hamid Karzia in his previous statements. 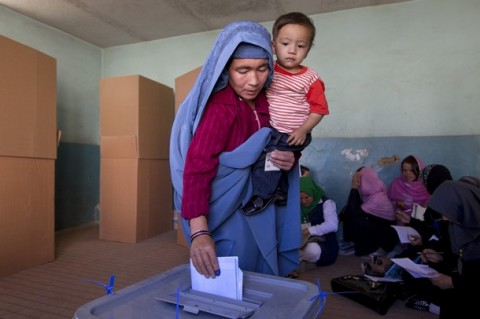 A Hazara mother holds her son as she casts her ballot September 18, 2010 in Kabul, Afghanistan. (Photo by Paula Bronstein /Getty Images)

Frauds and rigging were committed in various regions of Afghanistan, particularly, the Hazara populated areas such as Jaghori, Malistan and Meknik faced severe shortage of ballet papers and, at least, over 25, 000 people could not cast their votes. Sadly, a large number of polling booths were closed down in the first hours of voting on various pretexts. In Qarabagh, for instance, no polling was conducted although the locals had queued at polling centers since early morning and waited for hours with the hope of using their suffrage but the polling centers were closed down on the pretence of security although this is a peaceful region with ethnic Hazaras as the main population.

The IEC and Afghan President, Hamid Karzai have never realized to order an enquiry into the matter which deprived thousands of ethnic Hazaras from voting. Now, the senior Pashtun columnists, writers, intellectuals and news reporters – who claim to have in-depth knowledge of Afghan matters – like Rahim Ullah Yousafzai have turned their cannons toward successful Hazara candidates winning their seats from Ghazni province. This is not surprising that the Pashtun intellectuals come to the fore to defend their ethnicity despite the fact that the Taliban and the Al-Qaeda are exporting terrorism. There is no denying the fact that an overwhelming number of terrorist networks, their affiliates and outlaws belong to various clans of the Pashtun who are involved in genocides, massacre and mass human rights violations but these self-admiring award winners sew their lips, pour down mercury in their ear and blindfold their eyes to evade others.

Why their rigorous campaign has started to exert maximum pressure for re-election in Ghazni only? Who is to be held accountable for unfair distribution of ballet papers in Hazara inhabited regions?

A news reporter, a columnist, a political analyst is ethically and morally required to present the truths and ground realities to the masses no matter what caste, race, culture or ethnicity they belong.

The world community must utilise all available means to probe the insufficient distribution of ballet papers in parts of Hazarajat instead of making unrealistic proposals with regard to the Ghazni’s re-election. The Head of the IEC, Mullah Manawi and Hamid Karzai should be taken into task for underestimating the real strength of the Hazaras or deliberately affecting the suffrage of the masses. 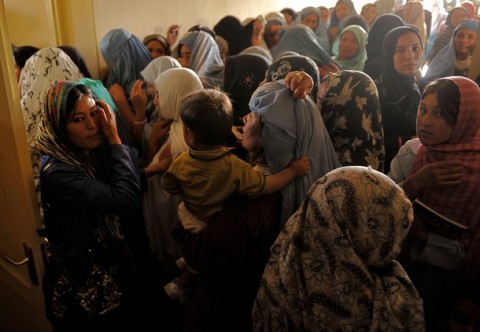 Hazara women watch as a polling station in Kabul runs out of ballot papers on September 18, 2010. (MASSOUD HOSSAINI/AFP/Getty Images)

Instead of making security excuses for Ghazni, they must concentrate on improving the law and order in overall as priority of one particular province can marginalise the public representation of another ethnicity which as already proved to elect their candidates.

Hamid Karzai has opened many fronts in this fragile situation which will be costly enough for his government to accomplish the long-standing wish of restoring law and order. Touching a particular string cannot owe him public credibility as his endeavour of appeasing the Pashtun and taking away the winning seats from Hazaras, may lead to fierce ethnic clashes. Realising about the entire deteriorating situation of the country, his enthusiasm of adventurism, will bring friction among others.