You are at:Home»Refugees»Labor plans to deport refugees to even worse conditions 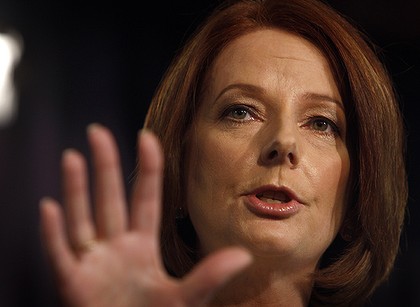 Labor plans to deport refugees to even worse conditions Prime Minister Julia Gillard’s government plans to establish a regional processing centre to stem the very small numbers of asylum seekers and refugees who attempt to arrive unauthorised by boat to Australia. With a nod to the Coalition’s racist “turn back the boats” policy, Labor plans to shift its current offshore processing of asylum seekers to a poorer regional country.

Timor-Leste is Labor’s preferred location for the planned regional processing centre. On July 12, before the federal election, the Labor government announced its policy in an attempt to pre-empt opposition within Timor-Leste. President Ramos-Horta met with Australia’s immigration minister, Chris Bowen, in Dili on October 12 to discuss a proposed Australian-funded asylum seeker processing centre in Timor-Leste.

But even before Bowen’s arrival, Horta made clear that the Timor-Leste government was thinking, at most, of a temporary centre under the United Nations High Commission for Refugees (UNHCR). “Any asylum seeker centre has to be a regional mechanism, it has to be led by the UNHCR … and it has to be temporary, not permanent”, Horta told the media. On October 13 Dr Mari Alkatiri, Timor-Leste’s former prime minister and now secretary-general of the main opposition party, Fretilin, opposed a processing centre.

Gillard’s proposal for a regional asylum processing centre has also not been endorsed by the Malaysian or Indonesian governments. Gillard said her aim was to create a regional framework under which asylum seekers would receive the same treatment wherever they were found. “There would be no advantage in moving from country to country trying to seek different processing regimes because you would find yourself returned to the one area under the one processing regime”, she was quoted in the November 2 Australian.

While there are few details of the planned regional processing centre, Gillard has said that asylum seekers would be moved to a third country for resettlement. In other words, the centre would be a mechanism for shifting Australia’s legal responsibility to give asylum onto other countries.

High Court’s spanner in the works

A considerable complication for the government’s plans was created by the High Court’s unanimous decision on November 11 rejecting the two-tier legal system under which asylum seekers who arrive by boat are treated differently than those who arrive by air, are detained offshore on Christmas Island and denied access to Australian courts.

The court determined that two Sri Lankan Tamil asylum seekers were denied procedural fairness because the review of their applications was conducted under regulations issued by the government, rather than according to the law.

“This decision applies to every asylum seeker in Australia subject to the offshore processing regime”, said David Manne, executive director of the Refugee and Immigration Legal Centre, who coordinated the High Court challenge. “It means that not one single one of them should be removed without their consent until they have had their claims assessed through a new and lawful process in accordance with the High Court’s ruling.”

Manne also indicated that the ruling could block the plans to move processing to a third country. “It’s unlikely the government could cure the fundamentally flawed process … by sending people to Timor or Nauru”, he told the Sydney Morning Herald.

The whole offshore processing regime was created by the federal Coalition government in 2001 to deny asylum seekers access to Australian courts. The High Court has now said that, even from Christmas Island, asylum seekers have the right to be heard in court.

But although the original reason for detaining people on Christmas Island has now vanished, the Labor government’s first responses to the ruling indicated that offshore processing would continue. The reason is clear: the government wants to continue intimidating asylum seekers with prison-like conditions and isolating them from support in the Australian population.

Labor’s pretended concern about asylum seekers risking the sea voyage to Australia has aimed its fire at people smugglers, yet its actions – mandatory detention, offshore processing, excision of islands from Australia’s migration zone, visa freezes, children in detention and regional processing – punish asylum seekers. Labor has also reneged on its 2008 promise that the onus of proof would be reversed so that the Department of Immigration and Citizenship would have to prove that asylum seekers were not refugees in order to deny asylum.

Immigration minister Chris Bowen told the November 2 Australian, “We already have the toughest mandatory detention regime in the Western developed world, yet people still come to Australia”. That says worlds about both the callousness of Labor policy and the conditions that cause people to flee their homelands.

On October 29 the Australian Human Rights Commission released its 2010 Christmas Island immigration detention report, calling for an end to mandatory detention and offshore processing. Commission president Catherine Branson, QC, said detaining asylum seekers in remote locations like Christmas Island was not appropriate. “It is important to remember that asylum seekers are not illegal immigrants”, she said. “All people have a fundamental human right to seek asylum from persecution.”

Branson called attention to “the significant increase in the number of people in … overcrowd[ed]and deteriorated conditions” on Christmas Island. “There are around 2500 people in immigration detention [there], including families with children and unaccompanied minors. Many people have been detained for months, and some for a year or more.

“We have real concerns about this. It is well known that detaining people for long and indefinite periods can have serious impacts on their mental health.

“It is even more concerning when people are detained in remote locations like Christmas Island where it is difficult to make sure they have adequate access to mental health services and torture and trauma counselling.”

On October 16, the government said it was making a major policy shift and would release hundreds of asylum seekers, mostly children and families, and allow them to live in the community while their applications are being assessed. But this turned out to be misleading. Not all children will be released from immigration detention. Many will not be released until June 2011, and some will continue to be detained even then. A new detention centre for families and children is being built at Inverbrackie in South Australia. The existing Darwin detention facility for families and children is being expanded, and another detention centre will be built at Northam, in WA, to hold 1500 single men.

2009 was the worst year in two decades for the voluntary repatriation of refugees. Only 250,000 returned home, a quarter of the annual average over the past 10 years. Developing and poor countries have borne the brunt of the global refugee crisis. With an estimated 800,000 refugees qualifying for resettlement, there are resettlement places available for fewer than 10 percent.

On October 29 a UNHCR poll of Iraqis who have returned from neighbouring countries found that physical insecurity, economic hardship and a lack of basic public services have led the majority to regret their return. The survey of 2353 Iraqis, or 537 families, who returned to the Baghdad districts of Resafa and Karkh between 2007 and 2008, was conducted from April to September this year. It found that 34% of returnees were uncertain whether they would stay permanently in Iraq and would consider seeking asylum again if conditions do not improve.

Sixty-one per cent of those interviewed regretted returning, mainly due to insecurity and personal safety concerns. Many cited explosions, military operations and kidnappings in places where they returned. Almost 80% said they did not go to their original place of residence, either due to the general insecurity or because they still feared direct persecution.

Gillard said in her October 19 speech in parliament on the Afghanistan war that Australia will be entrenched there “at least” through this decade. The Karzai government’s ambassador to the United Nations, Dr Zahir Tanin, said in a November 2 statement that “due to reoccurring instability and violence, one of the greatest numbers of refugee countries of origin in the world is Afghanistan”. Tanin said that, over the last 12 months, internally displaced persons had increased by more than 100,000.

Yet Chris Bowen told the November 2 West Australian that he hoped Australia could finalise an agreement with Karzai “in a matter of months” to deport hundreds of Afghan asylum seekers to Afghanistan from early next year. The agreement between Kabul, Canberra and the UNHCR would be modelled on one between Kabul and Britain under which Britain deports about 90 Afghans a month.

The government is rejecting up to 70% of Afghan asylum seekers. This contrasts with the need pointed to by the UNHCR chief, Antonio Guterres, in a statement on November 2: “As a result of never-ending conflicts, we are witnessing the creation of a number of quasi-permanent, global refugee populations, of which Afghans and Somalis are the most obvious …

“The vast majority of Afghan refugees, 96 percent of the total, reside in the Islamic Republics of Pakistan and Iran. Both countries have demonstrated – and continue to demonstrate – extraordinary generosity.

“Pakistan has been hosting Afghan refugees – currently numbering 1.7 million – for thirty years. Even the massive displacement resulting from the calamity of the recent flooding has not imperilled their welcome.

“With insecurity in many parts of Afghanistan, compounded by worsening economic and educational prospects, Afghan youth are fleeing or seeking opportunities elsewhere.”

The UNHCR noted these young people face high risks including being mistreated, forcibly separated from family members by smugglers, being detained, beaten and deported along their route, being held as forced labourers or passed on to traffickers, suffocating in the backs of trucks or drowning at sea and sometimes, even when they reach their destination, going without food or proper sanitation or medical care.

Australia will spend $106 million this financial year on aid in Afghanistan. Yet in a May 13 budget statement, the defence minister, John Faulkner, said the government will spend $1.1 billion for “enhanced force protection capabilities in Afghanistan over the period 2009-10 to 2012-13” – that is, for continuing to fight the war in that country.

The figure includes $5.8 million over two years to deploy two officers to Afghanistan to “liaise with the Afghan Government and relevant international organisations to assist with the appropriate settlement and reintegration of returned Afghan nationals”. This means “assisting” Afghans forcibly returned to the Afghanistan battlefield.

In fact, the government is willing to spend big to block refugees. It “will invest $1.2 billion to bolster Australia’s border security” and “build on the $654 million border protection and anti-people smuggling package in the 2009 Budget”. Over five years, $202 million will be spent “to increase capacity, maintain and upgrade service delivery and upgrade infrastructure in both onshore and offshore immigration detention facilities including capital funding for several immigration detention facilities”.

It seems farcical for Labor to commit to an elaborate plan to convince poor Asian countries to take on a much larger responsibility for Australia’s refugee obligations by supporting a regional processing centre. But Labor’s racism is more sophisticated than the Coalition’s. It does not want the outright taint of the Coalition’s “turn back the boats”. But neither does it want its mandatory detention regime and offshore processing to be under increasing public scrutiny. Hence its racist solution is to shift a large part of this onerous task to a poorer Asian country.

This, it hopes, will weaken Australian working people’s solidarity with Asian countries and their campaigns against the imperialist exploitation of their labour and resources and help to maintain divisions among working people in Australia for the benefit of the capitalists and the class-collaborationist union bureaucracy.