You are at:Home»News»Major discovery in Afghanistan 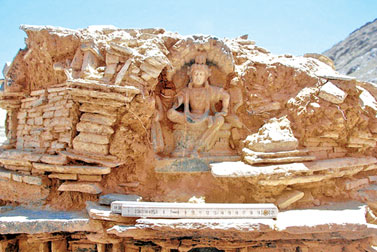 The monastery found while digging for the copper mine
News

By Hazara People on November 21, 2010 0 Comments
The monastery found while digging for the copper mine
Share this story The monastery found while digging for the copper mine

In 2001, Afghanistan’s ruling Taleban blew up two giant Buddha statues in defiance of international efforts to save them. United Nations former Secretary-General Kofi Annan, in Pakistan on a tour at that time, described the Taleban’s acts as a disservice to themselves and Islam.

The monuments, in Bamiyan were once a big tourist draw, and one of them was the tallest of its kind in the world. They dated back to between the Second and Fifth Centuries AD, before the advent of Islam, when Afghanistan was a centre of Buddhist learning and pilgrimage.

The 2,000-year-old Buddha statues were believed to have been carved during the time of the Kushan dynasty which is thought to have been the ancestors of the Hazara tribe that inhabits Bamiyan, the heart of the Hazarajat region.

Nine years after this barbaric event that produced a global public outcry, a Chinese company digging an unexplored copper mine in Afghanistan had unearthed ancient statues of the Buddha in a 2,600-year-old Buddhist Monastery in Mes Aynak.

Knowing the dangers posed to them by the Taleban, international archaeologists are rushing to salvage what they can from a major Seventh Century BC religious site along the famed Silk Road connecting Asia and the Middle East.

The ruins include a monastery and ‘Stupa’ and were discovered as labourers excavated the site on behalf of the Chinese Government-backed China Metallurgical Group Corp (MCC), which intends to develop the second largest copper mine in the world, lying beneath the ruins. 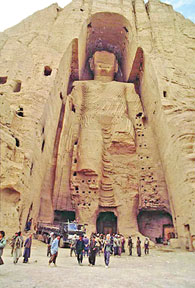 This picture is believed to have been taken by the Taleban, as they got ready to blow up the Bamiyan statue

MCC wanted to start construction work on the mine by the end of 2011, but under an informal understanding with the Kabul Government, it has given archaeologists three years to carry out a salvage excavation. Archaeologists working on the site since May say that there won’t be enough time for a full preservation. The monastery complex has been dug out, revealing breathtaking hallways and rooms decorated with frescoes and filled with clay and stone statues of standing and reclining Buddhas, some as high as 10 feet and mighty in their grandeur.

An area that was once a courtyard is dotted with mini stupas standing four or five feet high. More than 150 statues have been found so far, though many more are believed to be in place.

The larger ones are too heavy to be moved, and the team lacks the chemicals needed to keep the small ones from disintegrating when extracted.

“That site is so massive that it is easily a 10-year campaign of archaeology,” said Laura Tedesco, an archaeologist brought in by the US Embassy to work on the sites in Afghanistan.

The team hopes to lift some of the larger statues and shrines out before winter sets in this month. Around 15 Afghan archaeologists, three French advisers and a few dozen labourers are working in the area, a far smaller team than the two dozen archaeologists and 100 labourers normally needed for a site of such size and richness. They say that the salvage effort is minimal due to lack of funds and personnel. 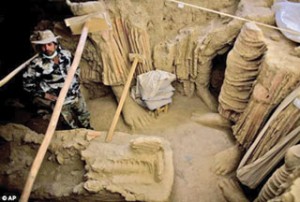 “This is probably one of the most important points along the Silk Road,” said Philippe Marquis, a French archaeologist engaged in the project. “What we have at this site, already in excavation, should be enough to fill the (Afghan) National Museum.”

Mes Aynak’s (20 miles from the south of Kabul) religious sites and copper deposits have been bound together for centuries and throughout the site’s history, artisan miners have dug up copper to adorn statues and shrines.

When China won the contract for the mine in 2008, there was no discussion with Kabul about the ruins, only about funds, security and building a railroad to transport the copper out of Logar’s dusty hills.

But a small band of Afghan and French archaeologists raised a stir and put the antiquities on the agenda. Some believe that Afghan archaeologists have known since the 1960s about the importance of Mes Aynak, but almost nothing had been excavated.

Although the mine could be a major boost for the Afghan economy, worth tens of billions of dollars, a Mining Ministry official working on the antiquities issue said MCC shares the government’s goal of protecting their heritage while starting mining as soon as possible.

But people all over the world are worried that the Taleban will soon destroy this historic site as they do not allow ‘non-Islamic’ relics or religious sites to exist in their country.