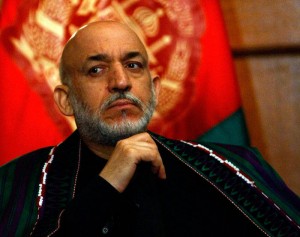 By Hazara People on November 15, 2010 0 Comments
Share this story The collapse of the Taliban in 2001 persuaded the Afghan nationals to rejoice and celebrate as they wished to take the reign of the government in their hands. The Taliban, on the other hand, tried to destabilize the entire country in forms of guerrilla wars, ambush, assaults, kidnapping and collecting tax from poppy-cultivating lands. The Afghans have learned good lesson from the brutal and despotic Taliban regime (1996 – 2001). They are also keen to oppose the latter’s inclusion into the incumbent government and formation of such power-sharing in the future. Kathy Gannon, (Special regional correspondent of the Canadian Press) has reported that the Afghan Mujahideen are taking their weapons out of mothballs to prepare for a large-scale war with the Taliban amid the efforts of Hamid Karzai to negotiate with the latter faction.

The Afghans in general and the International Community in particular have envisaged to safeguard Afghanistan from prospective Talibanization in order to evade civil war. Hence, they cannot afford to allow hardliners into their ranks in the name of reconciliation and negotiation. Some ethnicities like Hazaras – living in central Afghanistan – have always supported peace and tranquillity who would be pleased to further the tasks of international donors and aid agencies to rebuild the country. They have great contribution in modern Afghanistan who aimed to build the infrastructure and promote educational activities in their inhabiting land.
All pacifists sympathize with common Afghans who have suffered the brutalities of civil war for over two decades and the advent of the Taliban scratched their wound harder in form of massacres in Mazar-e-Sharif, Yakawlang and Bamiyan where they committed genocide of the Hazaras and over 10,000 innocent people were killed. The Afghans are making steady progress in every realm who would want more support to build up the country; however, there are bigoted writers and columnists whose hearts beat for the Taliban as the stroke of their pen. They may also be earning good money from terrorists to write or speak on their behalf. In a recent example, a well-known columnist of Jang Group, Rahim Ullah Yousafzai, showed his discomfort over the win of Hazaras in the recent parliamentary election. Although his latest article is merely devoid of logical observation, he still tries to avert general readers towards unworthy perception.

There is no iota of doubt that people like him (Rahim Ullah Yousafzai) would earn more in civil wars than peace who would not spare a moment to create anxiety among people through their writings and falsified judgemental notions. Intellectually, no body becomes a writer or an opinion-maker with writing some passages. Nor they can be lauded for unreliable and exaggerating write-ups. The above columnist has always favoured the Taliban overtly or covertly to show off his lack of wisdom as world community have identified the true image of fundamentalist Islam. People belonging to print and electronic media must realize that over-generalization of events and unrealistic weightage of hard-line form of Islam would affect the masses negatively.

The Hazaras consist of over 25% of Afghan population who deserve to be given their legitimate share. As they have had the opportunity to prove their ratio in the recent parliamentary election, why the Pashtun writers and columnist feel sharp pain in their chest? The Hazaras have successfully secured 52 seats out of 249 (about 21%) amid confirmed reports that the ballot papers in parts of Hazarajat and Hazara-inhabited areas finished as early as 11:00 AM. Places like Jaghori, Malistan and Nahur ran out of ballot papers in the first hours of morning which agitated the voters to gather at the heart of the city for mass protest and demonstration.

An eyewitness, Mr.Mukhtar Pedram, the Managing Director Weekly “Hashd-dad”, who visited Jaghori District says, “There were a large number of people in the election but, unfortunately, tens of areas faced shortage of ballet papers which prevented thousands of people to vote.” He says, “Only in Jaghori District, 14,000 people could not cast vote to their favourite candidates due to its unavailability. In Malistan District, for example, three polling centers were shut down because of lack of ballet papers and about 4,000 people, mostly belonging to ethnic Hazara of Meknik area could not vote. On the other hand, the Head of the Afghan Election Commission, Mullah Manuwi had omitted 80 polling centers in these regions despite complete security.

Surprisingly, no election was held in Qarabagh despite full preparations though the voters had made long queues outside polling stations since early morning. Initially, the officials of election commission and Afghan government assured the voters of the start of election but, after a few hours of desperate wait, they were informed that the election had been called off due to security reasons. The voters were astonished to know that the pretexts of Afghan election commission and the corrupt Afghan government were usurping their right to vote as though Qarabagh is a peaceful region, occupied by ethnic Hazaras who know no security threats.
There are reliable reports that polling ended in noon in places like Dasht-e-Barchi which is mainly inhabited by the Hazaras.

Rahim Ullah Yousafzai claims to be an expert in Afghan matter who has deliberately overlooked these facts. Had accurate amount of ballot papers provided in regions with Hazara population in majority, they could have proved to win more seats. Instead of arguing the percentage of an ethnicity, why we cannot underscore the weaknesses in the system? No matter, how on tries to portray a picture, the ground realities remain unchanged.

We must exercise due care in quoting the figures about matters related to a particular ethnicity which, if proved otherwise, shall damage our own reputation. The future of Afghanistan lies in the hands of Afghans who are working day and night for the progress and development of the country. The sympathizers of Islamic extremists will try to churn out unrest in the society but being rejected by the masses, their conspiracies will fade away.