You are at:Home»News»The identity of Afghan soldiers – murdering Two American fellow-workmen in Sangeen district – should be revealed 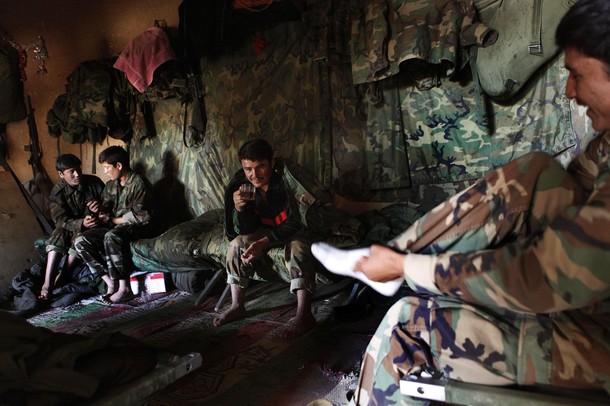 The ISAF Press Office at Kabul has stated to the correspondents that an Afghan national soldier has killed two soldiers of NATO. This incident took place at the American troops’ headquarters last night at about 02:00 hours local time at Taamiraan, Sangeen District of Helmand province. On the other hand, the Taliban spokesman, Qari Yousaf Ahmedi has contacted the news reporters to claim that three members of the US army were shot dead by an Afghan national solider at Sangeen District who has joined them with his gun. The Ministry of Defence, Afghanistan has not commented on this incident yet nor it has revealed the identity of the soldier.

In July this year, an Afghan soldier gunned down three British soldiers in Nad-e-Ali District of Helmand province and, then, joined the Taliban. Later, an Afghan policeman killed two Spanish soldiers who were engaged in the training of the police forces in West Afghanistan. Subsequently, the assailant was also killed in exchange of fire. These incidents cannot be attributed to Afghan forces alone as foreign troops, especially American soldiers, have also killed a large number of Afghan army and police forces this year on the pretext of assault. ISAF forces have knocked down over 14 members of Afghan army and police force in Qundooz and Ghazni. Foreign soldiers, stationed in Afghanistan, have never explained the motives of these incidents instead they have always termed them as friendly or inadvertent happenings. However, it is quite surprising when three British soldiers were killed in July by an Afghan national soldier, Dawood Azimi, the Head of British Broadcasting Corporation, Kabul without any credible evidence or confirmation reported the assailant as a Hazara, the same night, the news was published on the websites of BBC Persian and English. Questionably, these incidents may have taken place in Afghanistan umpteenth times but why correspondents like Azimi try to affiliate them with one particular nation whilst treacherous of other nations have always kept mum and never revealed the perpetrators of other incidents. Everyone knows that many of the people of Afghanistan, while that in their country from any citizenship rights is not businessmen, always paid a big price for honour and integrity of the country. All know the treacherous and traitors and every page in Afghanistan’s history is filled with these facts. Who has built over the country and which nation allowed selling out the country? Who are they that have, sometimes, sold the country to Great Britain, Russia, Saudi Arabia and Pakistan, and, sometimes, to America and Iran? Then we must know when other nations have always identified their dignity amid these embezzlements and usurpation of rights. Hence, we have to weed out this cancerous tumour, which has frustrated entire Afghanistan for 300 years.

Related story:
Hazaras are victims of the blame game in Afghanistan