You are at:Home»News»Afghanistan’s oppressed Hazaras use vote to claim a voice 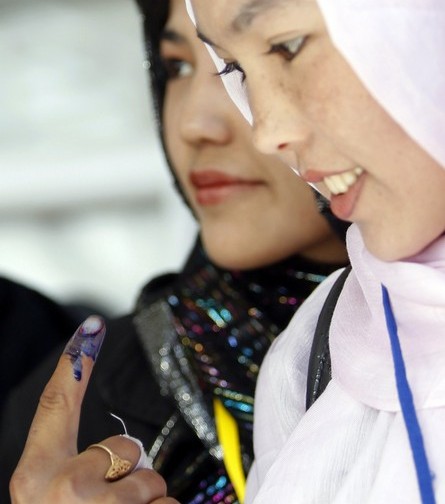 Afghanistan’s oppressed Hazaras use vote to claim a voice Afghanistan’s most repressed ethnic group, the Hazaras, have used their vote in recent parliamentary elections to win themselves a political voice that could change their fate. Throughout the war-shattered country’s history, Hazaras have occupied the bottom rung of society, and as Shia Muslims in
a country dominated by Sunnis were brutalised by a succession of rulers.

In post-Taliban Afghanistan, however, Hazaras are making democracy work for them, and look likely to take 20% of the seats in the recent parliamentary poll. “Hazaras have always been repressed and abused by their rulers,” said Ahmad, a Hazara intellectual who refused to give his surname because of the political sensitivity of the issue. “The new system, the democracy that we have had since the fall of the Taliban, is seen by Hazaras as a great chance to prove their existence.”

Hazaras account for 10-15% of Afghanistan’s population, which is estimated to be 30 million, although there are official census data. They dominate the country’s central highlands, a region surrounded by the conservative Pashtuns, Afghanistan’s traditional rulers from the south and east, and the urbanised, liberal Tajiks in the north and west.

For most of the past 200 years, Hazaras — descendants of Mongol conqueror Ghengis Khan, whose hordes rampaged across the region in the 13th century — have been treated as second-class citizens, banished to low-status, low-income jobs.

Whenever Hazaras have risen against the repression, they have been brutally subdued by their Pashtun rulers, who sometimes massacred entire clans and then doubled taxes on others.

The Taliban, the ultra-conservative Islamists who ruled Afghanistan from 1996-2001, kept up the tradition and made abusing the Hazaras one of the defining points of their brutal regime.

But since the Taliban were thrown out of power in a US-led invasion, the Hazaras have learned how to make the new system, a Western-backed democracy, work in their favour.

The September 18 parliamentary poll, the country’s second since the end of the Taliban era, marked a significant milestone on the Hazaras’ rocky journey to equality. Preliminary results show that Hazara candidates won more than 50 of the 249 seats in the lower house of parliament, the Wolesi Jirga.

“As a Hazara I’m absolutely satisfied with the results,” said Ahmad, reflecting the growing confidence of the Hazara community.