You are at:Home»News»Billions in Afghan aid fail to beat medieval disease 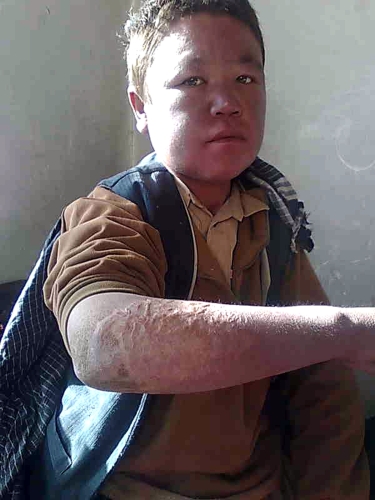 YAKAWLANG, Tuesday 2 November 2010 (AFP) – Mossa lives on the top of an Afghan mountain four hours’ walk from the nearest road in one of the poorest parts of the world and cannot remember the last time he washed.

A creeping pattern that looks like a fossilised fern decorates his right forearm — the tell-tale sign that he has leprosy.

His body has gone into shock as it reacts to the infection, said Dr Ali Moral, who points to the 17-year-old’s swollen red face, arms and legs.

“The first sign of the disease is the skin lesions with no sensation — no burning, irritation, itching or pain, just no sensation at all,” Moral said, prodding Mossa’s arm to prove its numbness.

“The nerves become enlarged and thick. Then the eyebrows fall out — that is another major tell-tale sign. Then the eyelids become perforated and paralysed, the patient cannot close the eyes so they can’t blink, the eyes become dry and eventually they go blind.

“The hands become clubbed,” he said, illustrating the effect by tightening his fingers into claws. “The nerves pull the fingers inwards. It destroys the eyes, hands and feet. They are disfigured for all their life.”

Leprosy is a disease that conjures up visions of medieval dirt, destitution and extreme disfigurement, of people confined to colonies while parts of their body — fingers, toes, nose — rot and fall off, and where they eventually die.

While today’s reality is a long way from that apocryphal picture, that the disease still exists in Afghanistan is a commentary on how little development has come since the Taliban were overthrown in a US-led invasion.

Despite tens of billions of dollars in aid money flowing into the country since 2001, living conditions for millions of Afghans have changed little from those of centuries ago.

The Afghan government of President Hamid Karzai has complained that it lacks control over much of the aid money — more than 40 billion dollars in less than a decade — and that oversight by donors is so poor cash is easily diverted or embezzled.

Officials have estimated that about a third of the money has gone directly to the firms that win the development contracts from donors such as USAID.

Many billions are believed to have disappeared into Afghanistan’s maw of official corruption, or been wasted on misguided or short-sighted projects.

A US government audit last month found that around 18 billion dollars was unaccounted for, snagged in a “labyrinth” of contract bureaucracy.

Earlier this year, Afghanistan’s Western backers agreed to give the government greater control of aid money — up to 50 percent from 20 percent — and to improve their own oversight of development funds.

What provincial officials say they need is the basics — roads, power, hospitals and schools — to drag their regions into the current century.

Moral’s tiny clinic — three minutes by motorbike from the house he was born in — is testimony to unfulfilled need.

For the past decade he has run the clinic for German charity Lepco in Yakawlang, a district of about 65,000 people almost 3,000 metres (9,000 feet) up in the mountains of Bamiyan province, in Afghanistan’s central highlands.

The region is famous for the huge Buddhas that were blown up by the Taliban in early 2001, for the azure Band-i-Amir lakes, for breathtaking landscape, and as one of the few areas to escape the worst of the war.

The people here are mostly Hazaras, believed to be descended from Ghengis Khan’s 13th century hordes who rampaged across Central Asia.

As Shiite Muslims in a Sunni-dominated country they are at the bottom of most demographic ladders — impoverished, uneducated, marginalised and, under the Taliban’s 1996-2001 regime, massacred.

— Life unchanged for hundreds of years —

Squatting beside Mossa’s foam-mattress bed on the floor of a cold concrete room he is sharing with an elderly tuberculosis sufferer, Moral said the only way to find lepers was to look for them.

He found Mossa while on a regular mobile-clinic tour of four Afghan provinces, looking for people suffering from leprosy or tuberculosis.

Moral has this year found nine leprosy sufferers in the provinces he tours — three in Bamiyan, the others in surrounding Daikundi, Ghor and Sar-E-Pul, he said, adding: “That’s half the number I had last year.”

The UN’s World Health Organisation (WHO) puts the number of confirmed new leprosy cases detected so far this year at 26, about half the number in 2009.

Afghanistan has 10 leprosy clinics across the country, where WHO provides the drugs and funding for treatment, said Mohammad Reza Aloudal, WHO’s national coordinator for tuberculosis and leprosy.

Moral said the main obstacle to finding lepers is that the disease incubates for between five and 20 years, and so is difficult to detect before the lesions start appearing.

While it is not as contagious as myth would have it, leprosy can be passed on if contact is prolonged and close — as it is among large Afghan families such as Mossa’s, with 12 siblings living in a small mud house.

“When I first started doing this, we found more leprosy patients more often, but it has decreased in these past 10 years.

“Now we only find them in the remote areas, in the valleys where people have no access to clinics, they don’t have enough food, hygiene is very poor, life conditions are very poor and haven’t really changed for hundreds of years.”

Of course, he said, he dishes out advice on hygiene, on not having livestock living in the house, on washing body and clothes at least now and then.

“But it is not possible in the remote areas. They live on the mountain, they don’t have running water or electricity,” he said. “Hygiene definitely plays a role in getting leprosy.”

Moral said he thought to drop in on Mossa’s family as he was passing by Dari Chost, 100 kilometres west of Yakawlang, at the end of his October tour last week.

“There is no road, the village is on a mountaintop, I walked four hours to get there,” he said.

“I found his brother some years ago, and yesterday I found him,” he said of Mossa.

“His body is reacting to the multi-bacterial infection. He is swollen in the face, arms, legs. He can’t walk. The reaction is feverish, body and muscle pains, extreme weakness.

“Last night I gave him medicine to bring down the inflammation, decrease the swelling. He has been like this for a week. If he was like this for longer, he would be disabled for the rest of his life,” he said.

Moral said he had found Mossa in time to treat the disease with a cocktail of drugs, with hopes of a full recovery — eight months to deal with the reaction, and a year to cure the leprosy.

Mossa certainly caught the disease from his brother, Moral said, adding that 80 percent of people worldwide have natural immunity.

“Mossa’s brother also had a reaction. It was during the winter so they couldn’t get treatment. His hands are now clubbed, his arms are paralysed, his eyelids are paralysed. He must be cared for by his family. Marriage will be difficult.”

Mossa’s father Ishmael, 60, sits worrying at the foot of his son’s bed.

Neighbours in his village of 30 families are good to them, he said, but they don’t know that the boys have leprosy. If they did, the stigma is such that no one would ever come near them again, he said.

The family are so poor that they look after other people’s livestock. They are illiterate, the nearest school four hours’ walk away.

As Moral examined the lesion on Mossa’s forearm, he said the boy had probably been developing signs of leprosy for about two years.

“We have to keep him here for observation, to prevent disability setting in, so he will be here for the next eight months at least,” he said.