You are at:Home»Refugees»Belgium: NGOs call to keep asylum seekers from unsafe states 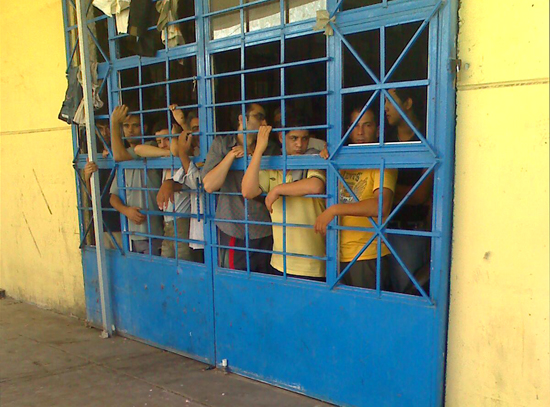 By Admin on October 30, 2010 0 Comments
Migrants live in overcrowded and unsanitary conditions at Pagani detention centre in Lesvos, Greece (MSF)
Share this story seekers to Greece, a country which does not respect the rights of refugees. Belgium will process their asylum applications instead.

Amnesty International, CIRE, the Belgian Committee for Support to Refugees, JRS Belgium and Vluchtelingenwerk Vlaanderen have all welcomed this decision.

Above all, JRS and the other NGOs have demanded a review of the Dublin Regulation which authorises the return of refugees to states which do not sufficiently guarantee their protection. This decision demonstrates the need to reassess this regulation.

According to the Dublin Regulation, the EU state where the asylum seeker first enters is responsible for the examination of their asylum application. This has put serious pressure on EU border states.

This regulation should be replaced by a just system, both for asylum seekers and for states. The introduction of a temporary suspension mechanism would be a first step in the right direction. It should be applied in cases where a state is faced with a significant influx of asylum seekers or where the refugee determination procedure does not respect European and international norms.

The return of asylum seekers to such states could then be temporarily suspended while the EU calls on them to respect their obligations and take concrete steps to rectify the failures. At the moment only a few states have suspended transfers to Greece. A suspension mechanism would oblige all EU states to adopt the same measures.

The decision of Melchior Wathelet has been long expected. Greece is one of the principal entry points into the EU and is considered the asylum seekers’ worst nightmare. They are forced to live on the streets or are locked up in cramped and unsanitary detention centres. The asylum procedure is a failure.

An Iraqi has almost no chance of being granted protection in Greece, whereas in the Netherlands, for instance, 77 percent of Iraqis are recognised as refugees. The UN refugee agency (UNHCR) recently described the situation in Greece as a veritable humanitarian disaster.

Over the past few years, JRS has urged EU states to stop the return of asylum seekers to Greece. Since then, Iraqi and Afghani refugees live in constant risk of being returned to their countries of origin.

Norway, the UK and the Netherlands have recently made the same decision as Belgium. These states, however, have not acted on their own initiative. National and European courts have prevented them from returning asylum seekers to Greece.

Belgium is currently at risk of being condemned by the European Court of Human Rights in an emblematic case: in 2009, Belgium returned an Afghan asylum seeker to Greece. Today he is living on the streets without the right to access a fair asylum procedure.

The proposed revision of the Dublin Regulation is currently on the table at European discussions. The European Commission has submitted a good proposal for recasting the Dublin Regulation. It is up to the Belgian Presidency to use its full political weight in the negotiations to ensure this revision pushes reform in the right direction.