You are at:Home»News»7 dead, 8 injured as van falls into ravine in Daikundi 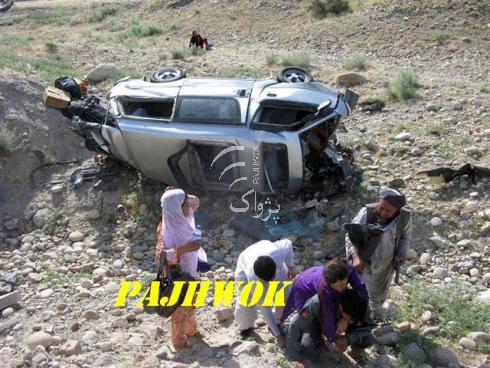 7 dead, 8 injured as van falls into ravine in Daikundi

By Hazara People on October 17, 2010 0 Comments
Share this story NEILI (PAN): Seven people were killed and eight others were injured when their vehicle skidded off a road and plunged into a deep gorge in central Daikundi province, officials said on Saturday.

The victims were travelling in a flying-coach vehicle towards Kabul when the accident happened in the Zanjok area of Miramor district, the district chief, Col. Muhammad Nadir Dawran, told Pajhwok Afghan News.

The dead included five men and a woman, he said, adding all the injured were women, who had been taken to a nearby hospital. The bodies were handed over to their families, Dawran said, blaming the tragic accident on the reckless driving. He said roads and routes in the province were narrow and damaged. “Such tragedies occur due to carelessness by drivers,” the official said.

A health official, Dr. Muhammad Sharif Shayan, said the flying-coach driver was in a critical condition and was referred to Kabul for treatment.