You are at:Home»Human Rights»Samar May Win Nobel Prize for Advocacy of Afghan Women’s Rights 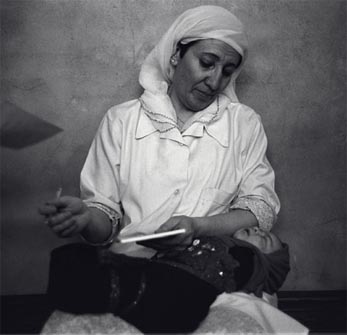 win the Nobel Peace Prize for her efforts to promote women’s health and education, according to the International Peace Research Institute.

Samar, 53, is the “top pick,” said Kristian Berg Harpviken, head of the Oslo-based institute, which ranks potential winners. This year marks the 10th anniversary of the United Nation’s Security Council Resolution 1325 on women, peace and security and “it’s very likely the committee would like to use the opportunity to mark the situation of women in war, the whole gender issue related to conflict,” Berg Harpviken said in a telephone interview.

Jailed Chinese writer Liu Xiaobo is the favorite to win the Nobel prize with odds of 3-1 at Dublin-based Paddy Power Plc. The Internet betting service ranks Zimbabwean Prime Minister Morgan Tsvangirai, 58, as No. 2, along with former Irish President Mary Robinson, 66, and Russian human rights activist Svetlana Gannushkina, all with odds at 8-1.

U.S. President Barack Obama unexpectedly won last year for his efforts to strengthen international diplomacy. Past laureates include U.S. civil rights leader Martin Luther King Jr. and Mother Theresa, a nun who tended the Calcutta poor. The prize, along with honors for literature, physics and medicine, was created by Swedish industrialist Alfred Nobel and first awarded in 1901.

The 10 million-krona ($1.5 million) prize will be announced by the Norwegian Nobel Committee on Oct. 8. It is the only Nobel to be awarded from Oslo. The others, including the prize for economics, founded by Sweden’s central bank in 1968, are announced from Stockholm.

Samar, a doctor who is head of the Afghanistan Independent Human Rights Commission, would be the 13th woman to win the prize, joining laureates such as Myanmar opposition leader Aung San Suu Kyi. The odds of Samar winning are 12-1 at Paddy Power, meaning a $1 bet would win $12. Kenya’s Wangari Maathai, who won in 2004 for her work to fight poverty in Africa, was the most recent female winner.

Samar formed Shuhada, a group focused on health care for Afghan women and also served as the UN special rapporteur to Sudan. After more than a decade in exile, she returned to Afghanistan in 2002 and was appointed Women’s Affairs Minister in Hamid Karzai’s transitional administration.

“We are gradually entering a period in the Afghan context where negotiations on the Taliban are creeping onto the agenda and one of the most problematic issues will then be women rights,” Berg Harpviken said.

Of the record 237 nominees this year, 38 are organizations, according to Geir Lundestad, director of the Norwegian Nobel Institute, a body that helps the Committee select winners.

Gannushkina, 68, founded the Citizens Assistance NGO and the Human Rights Center Memorial, which has worked on defending the rights of Chechens.

The five-member Nobel Committee in Oslo is led by Thorbjoern Jagland, who was president of Norway’s parliament before being named last year as secretary general of the Council of Europe.

“One could be concerned that the committee might be careful about giving the prize to a Russian human rights activist,” said Nils Butenschoen, director for Norway’s Center for Human Rights in Oslo, in a telephone interview.

China’s Xiaobo, 54, “would of course be a classic Nobel Peace Prize candidate, in the same vein as Vaclav Havel and other eastern European dissidents from the Cold War,” Butenschoen said. “If the Committee is completely independent and wants to give the prize to someone who is clearly deserving of it, who is in a difficult situation in a country that is undergoing rapid change, then he would be a worthy choice.”

Former Czech President Havel co-authored a letter published Sept. 20 in the International Herald Tribune that urged the Committee to award the prize to Xiaobo. China has warned Norway against giving the prize to Chinese activists.

Xiaobo was sent to jail by Chinese judicial authorities for violation of Chinese law, and “I think his acts are in complete contravention to the purpose of the Nobel Peace Prize,” Foreign Ministry spokeswoman Jiang Yu told reporters on Sept. 28.

Lundestad said the committee has shown its autonomy before, such as when it awarded the prize to the Dalai Lama in 1989.

“We’ve had contacts through the years with China and various Chinese ambassadors have told us about their dislike of the prize to the Dalai Lama and also warned us against Chinese dissidents receiving” it, he said. “We have shown our independence.”

Prizes for literature, chemistry, medicine and physics are administered by the Stockholm-based Nobel Foundation. The prize for medicine will be announced today and the prize for physics will be disclosed tomorrow. The chemistry honor is scheduled for Oct. 6 and the literature prize is set for Oct. 7. The Nobel for economics will be revealed on Oct. 11.