You are at:Home»Art»Hazara female student during a private violin class 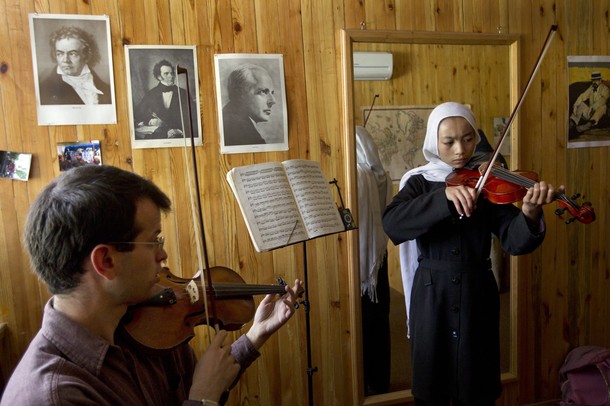 KABUL, AFGHANISTAN – SEPTEMBER 26: American violinist William Harvey teaches a Hazara female student during a private violin class at the Afghanistan National Institute of Music on September 26, 2010 in Kabul, Afghanistan. Afghanistan’s first and only music high school opened in June and now has 150 students, including 27 girls. The Taliban regime, from 1996 to 2001 banned all music, forcing many musicians to put away their instruments or go into exile. The school’s aim is to revive long-neglected musical traditions using both Afghan and foreign instructors. 25 students were recruited from the war-ravaged country’s large number of orphans and street children. There is a host of donor governments, international music colleges and instrument suppliers. (Photo by Paula Bronstein /Getty Images)