You are at:Home»News»This is a Hazara area and they do not want there to be a lot of Hazara MPs 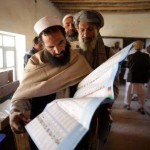 A Pashtun man looks up his desired candidate on the ballot as he queues to vote in Kabul. Saurabh Das / AP

Chris Sands, Foreign Correspondent
KABUL // Angry scenes marred the end of Afghanistan’s election for the 249 seats in the lower house of parliament yesterday as members of the country’s Hazara ethnic minority in west Kabul claimed they had been deliberately denied the chance to vote.

“I blame the election commission and I blame the government. This is a Hazara area and they do not want there to be a lot of Hazara MPs,” said Mustafa Attahi, a monitor at the polling station for one candidate.

He claimed 300 to 500 people had been prevented from voting in west Kabul. In the capital alone more than 600 people ranging from ex-warlords to TV celebrities were competing for just 33 seats, nine of which are reserved for women. Results are not expected until the end of October.

At a mosque that doubled as a polling station in the Dasht-i-Barchi neighbourhood, people argued with officials after the supply of ballots had run out late in the afternoon.

Some claimed to have travelled by bus from other places in the capital where they said they had also been prevented from voting. Others described bus drivers desperately driving around in an effort to find a polling station where their passengers could vote.

Elsewhere, however, events appeared to run without too many obvious signs of trouble.

In Kabul, most of the winners were likely to emerge from among the powerful former militia commanders and religious leaders running for office. They include men linked to serious human-rights abuses, who often battled against each other during the sectarian conflict that tore the city apart between 1992 and 1996.
At one polling station, Ghulam Rasul, 48, arrived on crutches having lost his left leg years ago while fighting in Kandahar for the former communist government against the Mujaheddin.

He held a card advertising his preferred candidate in one hand, thinking he could use that to vote. He was undeterred when told he actually required a government-issued election ID and pledged to return soon.

For him, democracy “is the way of unity, brotherhood and peace”, he explained.

The Taliban disagree and issued a statement last week warning people not to participate in the election. “We call on our Muslim nation to boycott this,” the rebels said. Instead, they encouraged people to drive out the “invaders” by “sticking to jihad and Islamic resistance”.

It is a message that was taken firmly on board in some quarters, according to one election monitor at another polling station in Kabul.

Ehsan Ullah was registered to vote in the neighbouring province of Maidan Wardak but had opted not do so for security reasons. Fellow members of Afghanistan’s Pashtun ethnic group would remain at home, he said, as a matter of principle.

“The majority of residents in those areas will not vote and they will not vote for ideological reasons. Mullahs and the Taliban have given them the idea that this is an infidel’s government and this is a foreign process that is a step towards becoming slaves of the occupation,” he said.

This has a been the bloodiest year in Afghanistan since the US-led invasion. At least 333 American troops have died so far, compared to 317 in all of 2009. Violence has also spread to once peaceful northern areas and, according to the UN, the number of civilians killed or injured rose by 31 per cent in the first six months of 2010.

However, Mr Ullah said the election did have the potential to halt the slide into further violence.

“If we take care in the voting and elect men who are educated, the situation will change positively, but if we select blind people then we will have a new parliament like the last parliament,” he said.

Although a major insurgent attack on Kabul failed to materialise, a rocket did land near the US Embassy a few hours before polling stations opened at 7am.

Meanwhile, some Afghans were reported to have scrubbed clean the supposedly indelible ink put on their finger when they vote in an effort to return and cast a second ballot. Reuters said police had arrested one man in the capital for doing just that.

In the city’s Khair Khana neighbourhood, a school being used as a polling station was packed with voters and observers hired by candidates to check for irregularities.

Ghulam Haider Sahil, 22, said he had voted “to decide my future and my nation’s future” but refused to name whom he had supported. Despite his obvious pride in being involved in the process, he warned that controversy could be around the corner when the ballots are counted.

“The last three elections showed us we will not have a free and fair election over the country and we will have a lot of fraud,” he said.

“All the powerful people, all the strong men, will try to commit fraud for themselves.”

Mr Sahil added that insecurity and Taliban intimidation would also play a large part in determining the outcome of the day’s events.