You are at:Home»Refugees»Expert calls for end to Australian freeze on Afghan asylum seekers 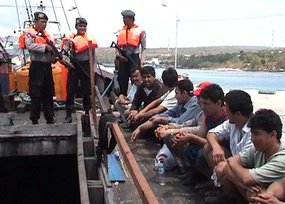 freeze on processing asylum seekers from the country.

Earlier this year, the government announced it was suspending asylum applications from Afghanistan because the security situation was improving.

William Maley says there’s not an expert in the world that would agree with that assessment.

Professor Maley says daily life for Hazara people in Afghanistan is dangerous and full of risk and their refugee applications should be fast-tracked, not suspended.

“The historical experience in Afghanistan for Hazaras and also the recent experience is so well documented that to set the bar high for them in terms of the refugee claim is really to be out of touch with the complexities that are on the ground there,” he said.

Professor Maley says Hazaras have been persecuted in Afghanistan since the 19th century.

He says 11 Hazaras were decapitated and left to rot on the side of the road in a recent massacre in Uruzgan province.

“It’s indeed very dangerous for Hazaras. This is something which seems to have been completely overlooked by the Government in its decision making,” he said.

“Of course, by suspending processing of people whose claims probably should be rapidly approved, the Government then set the scene for clogging up of detention centres which is creating this hot house atmosphere.”

The Australian government’s suspension on refugee applications from Afghans and Sri Lankans is due to be reviewed next month.