You are at:Home»News»Afghan minority leader says government blocking his voters 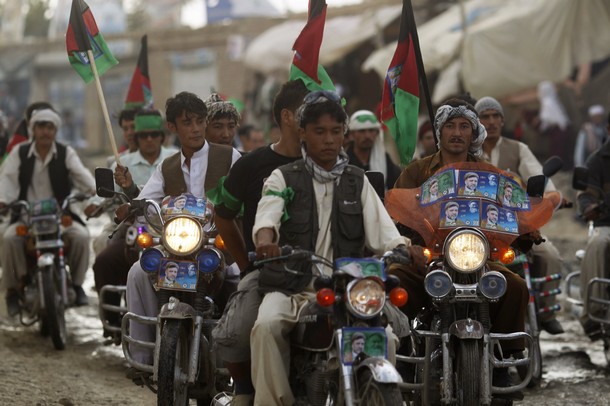 Hazara People note: We respect all people, but Hazara people are not Afghan. Afghan or Pashtun is another ethnic group in Afghanistan. JABAR KHAN, Afghanistan (Reuters) – The Afghan government has deliberately shut polling stations under a pretext of insecurity in relatively safe areas where the Hazara ethnic group dominates, their leader said on Thursday.

Millions of Afghans will go to the polls on Saturday to choose from over 2,500 candidates running for 249 seats in the country’s wolesi jirga, or the upper house of the parliament.

More than 30 candidates from Haji Mohammad Mohaqiq’s party, Hezb-i-Wahdat, are standing in the election in a bid to win more parliamentary seats and influence in Karzai’s government. The lawmaker is also running for re-election.

“I believe this year’s election has already been engineered by the government who want to help their favorite candidates to win,” Mohaqiq told Reuters at his residence in Kabul. “Certainly there are political maneuvers from people in the government against different ethnic (groups).”

The Afghan Independent Election Commission announced last week that nearly 15 percent of planned polling stations will not open because of poor security, mostly in the eastern and southern parts of the country where violence is the worst.

But Mohaqiq said many polling stations in relatively stable areas of northern and central Afghanistan, from where he hopes to win major support, have been deliberately closed in an attempt to block Hazara votes.

“It is a political blow to me by closing many polling sites in Bamyan where security is not an issue,” Mohaqiq said, referring to a Hazara-dominated province in central Afghanistan. “Thousands of voters will be deprived of votes.”

Election security is a major concern with the insurgent Taliban threatening to disrupt the poll, although the government says it can provide total safety with the support of over 150,000 foreign troops present in the country.

“Possible fraud from government workers who may stuff ballot boxes in volatile areas is my concern too,” he said.

The mainly Shi’ite Hazaras have been marginalized for centuries by Sunni rulers in Kabul, and thousands were massacred under the 1996-2001 rule of the Taliban, dominated by the Sunni Pashtun ethnic majority.

Although the Hazara numerically would be hard-pressed to threaten Karzai politically, they could do so if allied with other minorities. Karzai, a Pashtun, has managed ethnic relations by appointing minority militia leaders and their allies to positions in his government.

In last year’s presidential elections, Karzai had promised minority leaders cabinet seats, Mohaqiq said. But several Hazara cabinet candidates were then turned down by mainly Pashtun parliamentarians in what Mohaqiq calls a betrayal.

“We were the ones who helped Karzai win the election, and we are the ones who can topple him,” he told a crowd of mainly Hazara people who came to hear him speak at a gathering west of Kabul. “I am here to defend your rights, trampled for decades.”

The crowd, many of whom held up posters of Mohaqiq, erupted into applause and began chanting slogans.

“Our dearest leader, we will support you,” they shouted.

He had roared into the area in a convoy of nearly a dozen four-wheel drive vehicles through a dry riverbed that serves as the road in an area without them. Bodyguards blocked the road to traffic to escort him to the speaking venue.

“This time I will make sure your vote will not go in vain and will be used for the improvement of your condition,” he said.